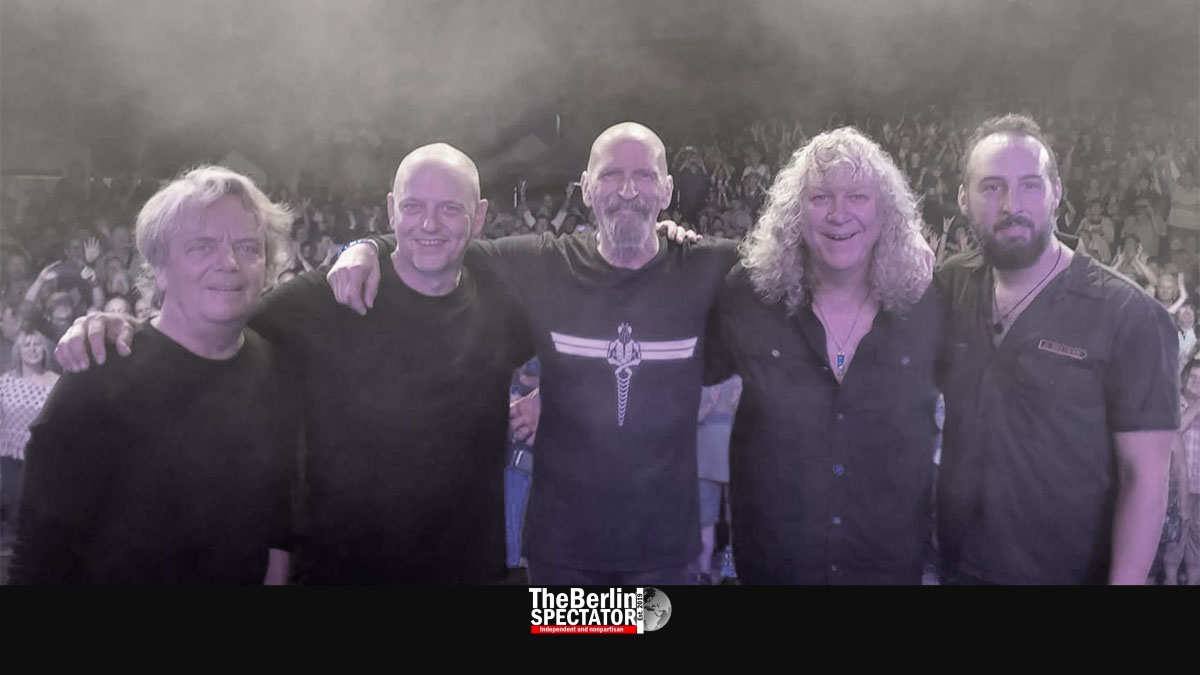 In the next weeks and months, the legendary Canadian Rock group Saga and many other bands and artists that reached the peak of their fame some 40 to 50 years ago will be standing on German stages. One of them once released the “Hymn” of the late 1970s.

Berlin, October 28th, 2022 (The Berlin Spectator) — Somebody must have turned back the clock accidentally, by a few decades. Looking at upcoming Rock, Pop and Folk concerts in Germany is like time travel. Maybe the more difficult first part of the Corona pandemic made legendary artists want to get out there again, abuse those instruments and set up microphone and cymbal stands everyone will trip over.

A first round of concerts of the kind described above is already behind us. Tom Jones, Toto, Jethro Tull and Eric Clapton recently completed their European tours. The same applied to Genesis, whose front man Phil Collins needed to sit while he was singing because of health issues. People who were in the audience said those gigs were “awesome” anyway. Nobody doubts that.

Now, it is time for the next round. Do you remember an album entitled “Gone to Earth” released in 1977? The band was Barclay James Harvest. A song that was part of this record was “Hymn”, which is exactly what it became, the hymn of the late 1970s. It is one of the most memorable Rock ballads of all time. We have never seen this many lit lighters in any concert. These Brits nailed many other songs too.

Heretics and those people who are into Deep Purple (who will be playing in Berlin this Monday, October 31st, 2022) more than into softer approaches will tell you they are crooners. Don’t listen to them. BJH will be doing quite a few gigs in March of 2023, in Berlin, Düsseldorf, Bremen, Erfurt, Gießen, Darmstadt, Reutlingen and Theley. They have strong ties to Germany, and many fans in this country. Tickets are available here.

When Simply Red made landfall in the 1980s, they quickly appealed to lots of people. This kind of high quality Pop music with a strong Soul influence, thanks to the voice of the one Mick whose last name is not Jagger but Hucknall, convinced absolutely everyone. Nobody ever sounded like them, nobody does today and nobody ever will. And yes, they will be in Germany too. Hamburg, Frankfurt, Hanover, Dortmund, Cologne, Mannheim, Berlin, Stuttgart, Leipzig, and Munich, in this order, are listed in this online ticketshop. This German leg of their tour obviously is extensive and will be taking place rather soon, from November 14th, 2022.

Do song titles such as „Humble Stance“ or „On the Loose“ ring a bell? If they do, you were probably born in the sixties or early seventies. The Canadian Rock band Saga came up with those hits back then in the good old days. If you believe they are coming to Germany as well, you guessed right. On November 9th, 2022, they are scheduled to take apart a venue in Mannheim. Next year, the guys from Ontario will be back. Then, it will be Hamburg, Berlin and Munich (tickets). Welcome, guys!

How many times have you experienced James Taylor concerts in Germany? Exactly. This is an opportunity we do not have every day. Without this singer/songwriter, all the Folk-Rock recorded in the past five decades would have sounded different. This is the kind of influence the guy has. Shall we mention “Fire and Rain”, a stunning song that brought him fame in 1970? If the ‘Jeopardy’ assignment was “A song written by Carole King and interpreted by James Taylor in the 70s”, the right question would be “What is ‘You’ve Got a Friend'”? In November, he will be performing in Stuttgart, Frankfurt, Berlin and Hamburg (tickets).

Nobody needs to introduce Elton John. If the Corona pandemic agrees, he will be playing in Hamburg, Berlin and Cologne twice each, and in Munich once. The Yellow Brick Road tour will be taking place in May of next year. Status Quo are supposed to tour Germany in December of 2022. There are so many gigs.

Have you noticed the number of cover bands is increasing? Simon and Garfunkel released one of the most important singer/songwriter albums of all time, in 1974. It was entitled “Bridge Over Troubled Water”. No, they are not coming, but there are several cover groups that will be doing their songs. “The Only Living Boy in New York”, anyone? By the way: Guess what legendary acts the cover bands Letz Zepp and Dire Straits Experience are covering.

President Steinmeier: ‘We Will Preserve Our Freedom and Our Democracy’