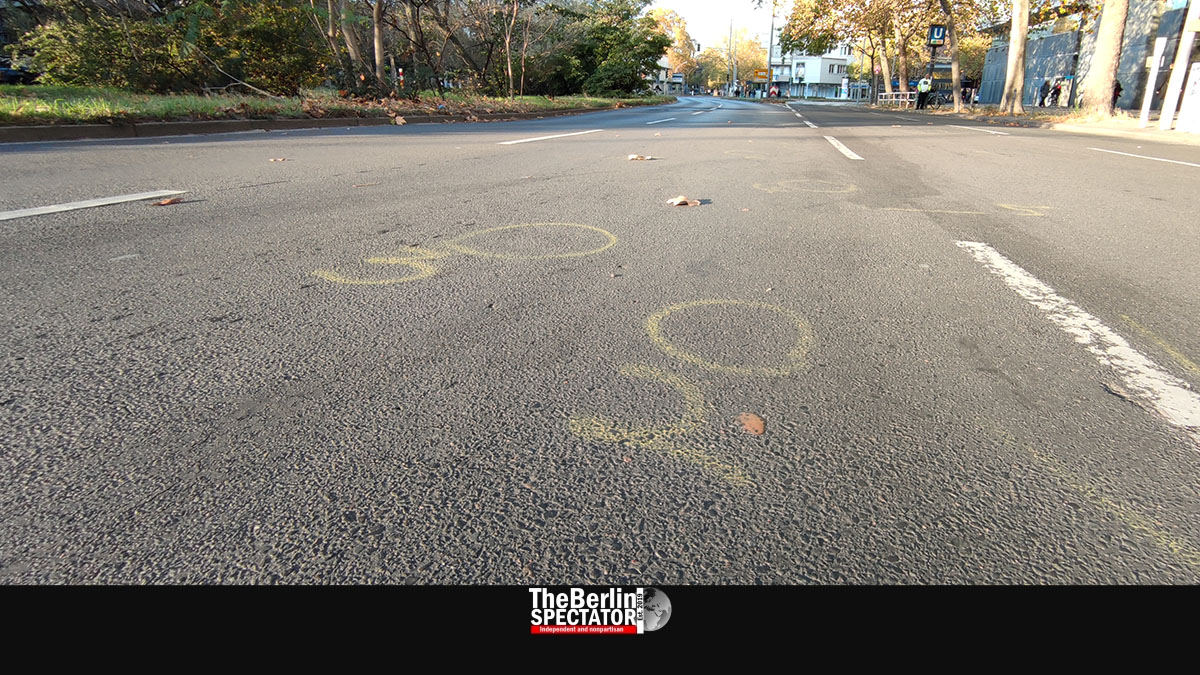 According to the Berlin Fire Department’s final report on an accident a cyclist got killed in on October 31st, a rescue truck was hampered by ‘climate activists’ who blocked streets that morning. With this truck, there would have been more options to save the woman who died on Friday.

Berlin, November 10th, 2022 (The Berlin Spectator) — As the RBB radio and TV network reports, the Berlin Fire Department’s final review on a terrible accident that happened on Monday of last week comes to the conclusion that protesters who blocked streets delayed a special rescue truck by 8 minutes. With this truck, a concrete mixer that ran over a cyclist in Berlin’s Wilmersdorf borough could have been lifted to rescue the woman who was stuck under it.

Because of the delay caused by the group Last Generation’s blockades, using this rescue method could not be taken into consideration. According to the report, lifting the concrete mixer would have been a more gentle rescue option than the one that was used. The heavy cement mixer vehicle was actually “driven off” the victim, meaning it was moved while the lady was still under it. Generally this rescue tactic was not recommended, the Fire Department’s report says. Several German-language media quoted it.

Whether the accident victim could have been saved, had the truck not been delayed by Last Generation’s street blockades, is unclear. But, with the method the rescuers were forced to use, an additional danger to both the victim and the rescuers could not be ruled out entirely, the final report read. The document was sent to Berlin’s Senate Department of the Interior and will be provided to the Berlin Prosecution as well. Because of the ongoing investigation into the accident, the Senate declined to comment.

According to the ‘Bild’ tabloid, the victim, who was declared braindead last Thursday and died on Friday, was Sandra Umann. The 44-year-old woman ran the vegan and sustainable fashion label Umasan with her twin sister. Prominent person from around the world wear the clothing it offers.

The accident happened at a big intersection on Bundesallee. Once it is available, the final investigation report is supposed to say how and why exactly she was run over by the concrete mixer. The location at which it happened suggests she may have used a lane for cars and trucks to make a left turn instead of riding on the bike lane located on the sidewalk. She may have intended to save time.

On Sunday, the NGOs ADFC and Changing Cities organized a commemoration event for the victim at the site of the accident. Some 250 Berliners took part. The ADFC placed a white bike at the location. It is a tradition which makes passers-by and motorists aware of the fact that a cyclist was killed there. Right before mourners gathered at the intersection, the organizers staged a protest at which they demanded an improved infrastructure for cyclists.

Sandra Umann was the ninth cyclist to die in an accident on the streets of Berlin this year. Two days after her accident, another one happened in the German capital’s Lichtenrade borough. Here, an 85-year-old cyclist was hit by the car of a 37-year-old man. The victim was taken to a hospital with head injuries of which he died on Saturday. He is the tenth fatality.

The Mission: Killing the Death Penalty