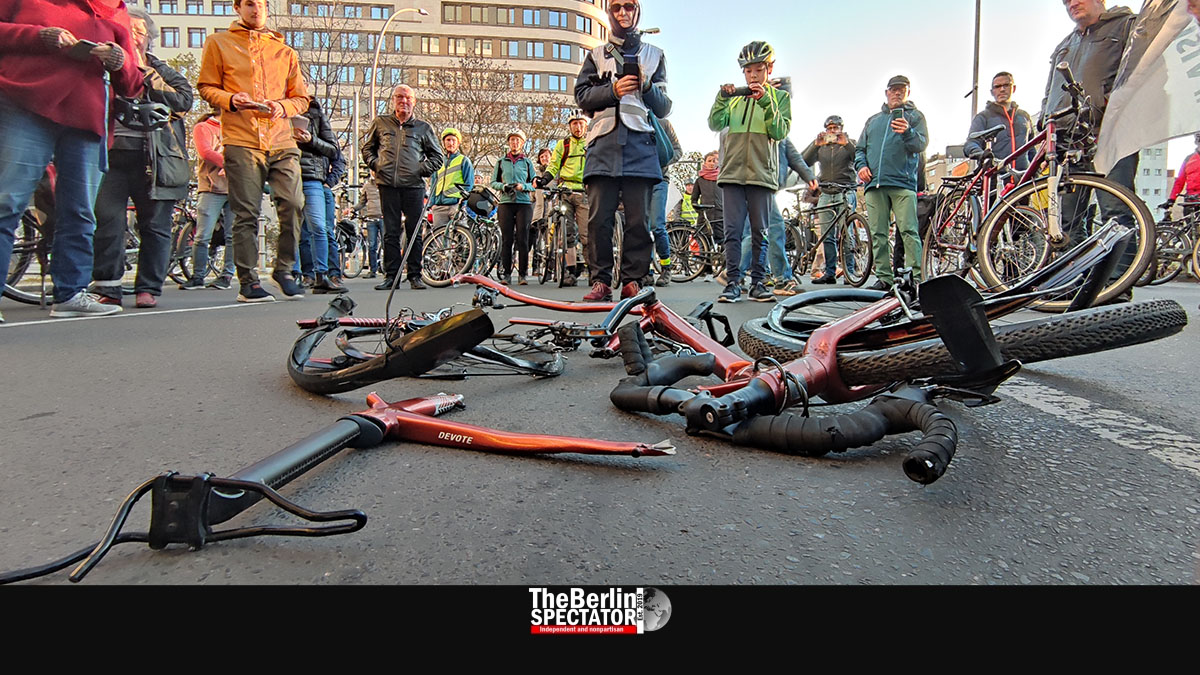 On Sunday, some 250 people commemorated a cyclist who died of her injuries after she was run over by a heavy truck earlier this week. The event took place at the location of the accident in Berlin’s Wilmersdorf borough.

Berlin, November 6th, 2022 (The Berlin Spectator) — Two NGOs, the German Cyclists Association (ADFC) and Changing Cities, organized a commemoration event for a woman who was run over by a concrete mixer truck on Monday. She sustained life-threatening injuries and was flown to a hospital by helicopter. On Thursday, she was declared braindead. On Friday, she died.

About 150 people on bikes took part in a protest for more safety on the streets of Berlin. Later, at the location of the accident, a big intersection in Berlin’s Wilmersdorf borough which used to be part of West Berlin, the crowd grew to approximately 250. “This spot is typical for a car-friendly city of the past century”, Solveig Selzer of the ADFC told The Berlin Spectator on site. “There are four lanes in each direction for the motorized traffic, a narrow bike lane next to it and a construction site. This spot has not yet been remodeled according to the safety requirements”, she stated.

Once the police had blocked the street at the accident site, Paul Jäde of Changing Cities held a speech. He said society had lost a woman who had not had the chance to say goodbye. “This could have happened to you, or you, or you”, he said while pointing at people, “or me.” After a moment of silence in memory of the victim, Jäde said Berlin hardly had any spots at which cyclists and pedestrians could take part in the city’s traffic safely. He called for an improved infrastructure. Measures needed to be taken now.

The deadly accident got a lot of attention in all of Germany and abroad, for two reasons. First of all, the driver of the cement mixer truck got stabbed by a man with a knife when he left the vehicle to look for the victim. Secondly, members of the radical group Last Generation caused a traffic jam on a nearby city freeway. They were being accused of having caused a traffic jam a special rescue vehicle got stuck in after the accident.

Two investigations are ongoing. The Berlin Police Department is looking into both the accident itself and the stabbing incident. According to local German-language publications, the investigators are using video footage automatically recorded by a Tesla vehicle which was located behind the concrete mixer truck and the victim as the accident happened.

It happened right on the street, at a location the cyclist should not have been at. According to the traffic laws, she should have been on the bike line located on the sidewalk. Had she been there, she would have had to wait for the motorized traffic to move at a traffic light for pedestrians and cyclists. The victim may have wanted to save time by riding on one of the lane for cars and trucks, meaning she could be partially responsible for the accident. But neither has this been confirmed, nor would it change the fact that this terrible accident should never have happened.

Berlin’s Transport and Environment Senator Bettina Jarasch was at the commemoration event. She said she did not want to comment on the accident because “this event is about the victim only”. Paul Jäde told her and the other participants, the city of Berlin had been planning to improve the intersection at which the accident had happened. But so far, the changes did not meet the required criteria.

The 44-year-old victim is the 8th cyclist to die on the streets of Berlin this year. Berlin’s Senate is working on a mobility transition the plans for which include more and safer bike lanes, a network of bicycle highways and more space for both cyclists and pedestrians. Critics are saying the implementation takes too long.

Whenever a cyclist is killed in an accident, the ADFC places a white bike at the location to make people aware of what happened. This time, the victim’s bicycle was brought to the commemoration event too. It was crushed completely by the weight of the cement mixer (see photo at top of page).