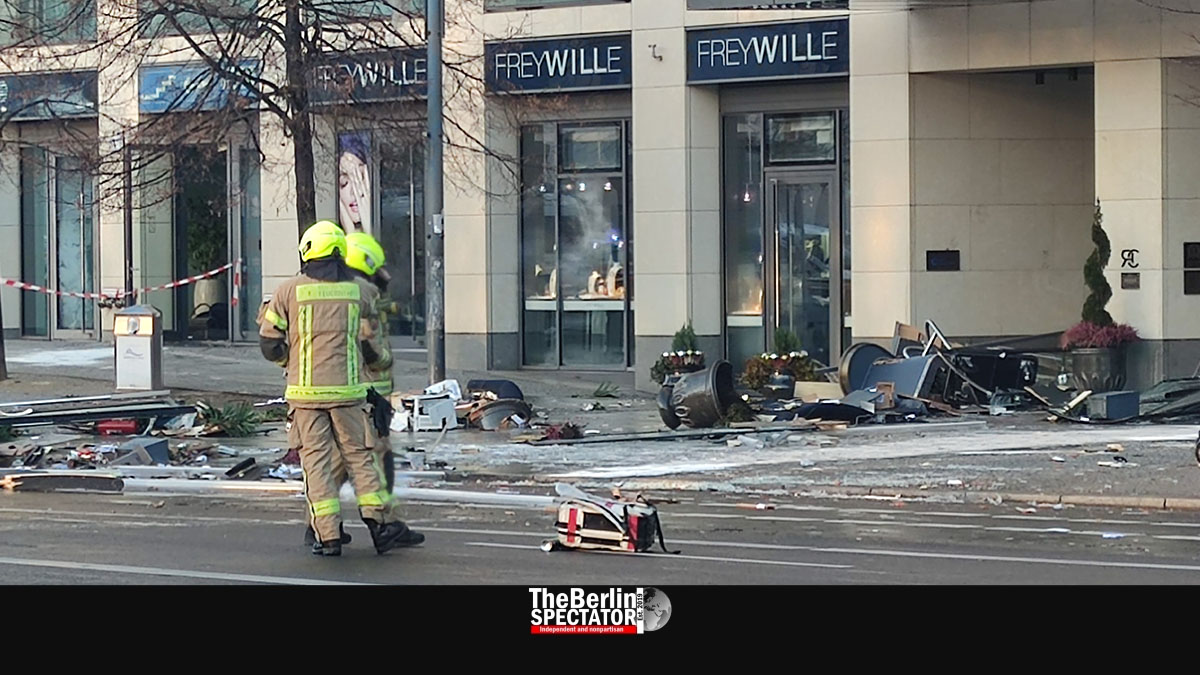 In Berlin, experts are asking themselves one question: How on earth could the city’s largest aquarium explode and devastate the Radisson Collection hotel? At least the building is still safe.

Berlin, December 17th, 2022 (The Berlin Spectator) — When Governing Mayor Franziska Giffey visited the scene of the explosion that turned the Radisson hotel at Karl Liebknecht Strasse into a big mess, injured two persons and killed hundreds of fish, she said the 1 million liters (264,172 gallons) of salt water that had flooded the building and the street in front of it must have felt like a tsunami.

Mrs. Giffey was right about something else as well: Had the giant aquarium bursted an hour later, it would have been far worse. The explosion took place before 6:00 a.m., when nobody was having breakfast yet and hardly anyone was present in the lobby, except for a few employees. And nobody was in the tunnel inside the aquarium either. Indeed, people could have been killed if this had happened during business hours.

More of Our Articles

On Friday at about 5:45 a.m. CET, the aquarium had burst all of a sudden. All the salt water flooded the hotel lobby it was installed in, and the street. The ‘tsunami’ was so powerful it took a lot of furniture with it. Cleaning up the mess took all day. In the evening, the building was turned over to its owners.

Structural engineers had been on site after the mishap. Their task was to establish whether the building is stable, since the water had damaged part of its facade. The good news: It is. The only danger is all the acrylic glass in the lobby. It will probably take a long time until guests can be welcomed at this Radisson again. At this moment, the construction of a replacement aquarium seems to be an unlikely scenario. Nobody wants to go through this again.

Far more than 1,000 fish died when the basis of their existence, all the salt water, ran into manholes on Karl Liebknecht Strasse, but now we know hundreds of other fish were saved. Some were left at the bottom of the aquarium. A few hundred other fish were kept in a separate aquarium downstairs. All surviving fish were taken to the SeaLife aquarium and the one at Zoo Berlin.

The mishap in Berlin will cost money. First of all, Radisson will be losing a lot of income because the company cannot accommodate guests in the kind of mess the ‘tsunami’ left behind. Next door, the GDR Museum was damaged by the sudden flow of salt water. It might have to close for several months for repairs. The aquarium’s insurance company will have to pile up a lot of cash.

A day after the explosion, its cause has not been established. The assumption is that material fatigue is to blame. It does not require a degree in physics to come to this preliminary conclusion. There are open questions: Why did this happen during the coldest night of the year (so far)? Does the temperature have to do with this mishap? Here’s another one: Should the state of other large aquariums be checked, to prevent more ‘tsunamis’ from happening? It would probably be a good idea.