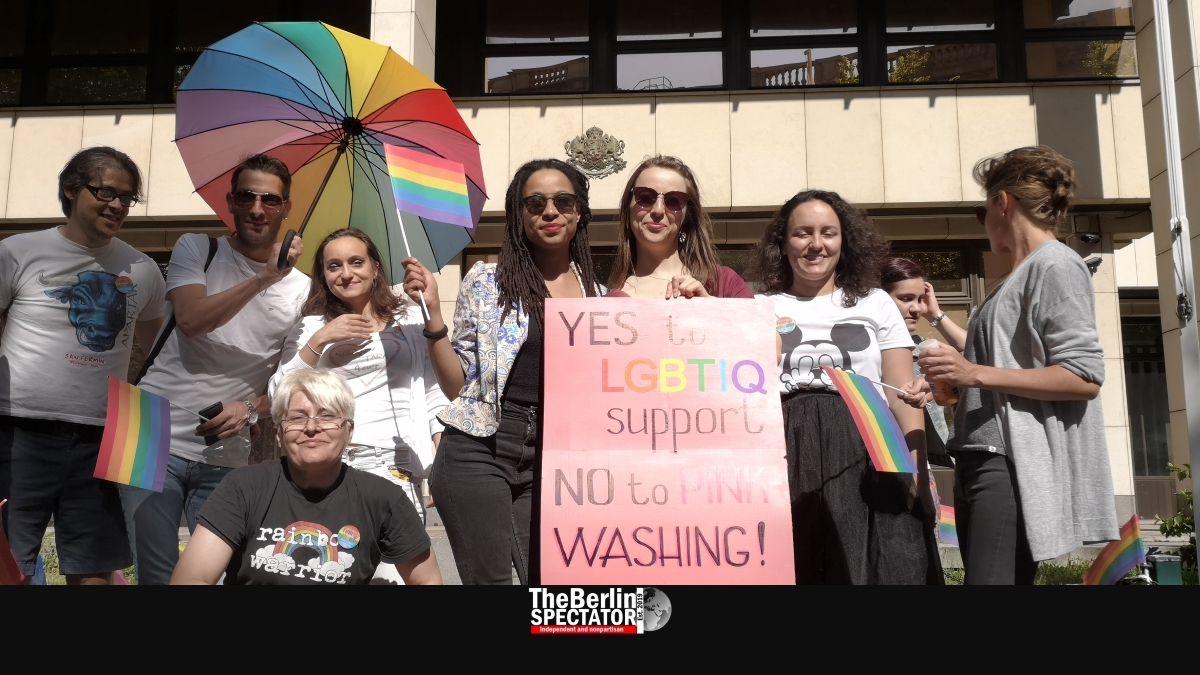 In Berlin, some 20 Bulgarian expatriates have demonstrated solidarity with the Sofia Pride Parade, which took place at the same time. In front of the Bulgarian Embassy in ‘Leipziger Strasse’, the participants held a sign saying “Yes to LGBTI support” and rainbow flags.

One protester said the LGBTI community in Sofia needed this kind of solidarity. In addition, the rally in Berlin was supposed to raise awareness. In Western Europe hardly anyone knew what kind of situation Bulgarian lesbians and gays were confronted with in their home country, she stated.

The Bulgarian government, which consists of Prime Minister Boyko Borissov, a former firefighter and bodyguard, his conservative party GERB and the radical right-wing ‘United Patriots’, is homophobic, according to critics. It hardly supports any minorities.

Not a single MP has stood up for gays and lesbians either. Only a few progressive politicians of the Greens and the ‘Yes, Bulgaria!’ movement, neither of which are part of the Bulgarian National Assembly, have demanded support for the community.

For years, the ambassadors of Western European nations, including the United Kingdom and Germany, as well as the United States and Israel, have supported the Sofia Pride Parade by writing joint statements, and by holding speeches at the event.

In Bulgaria, the Sofia Pride Parade is of high importance. Once a year, the rally restarts a national discussion about homosexuality. It does trigger a lot of hate speech, both online and offline, but also confronts the Balkan country with its homophobia, which is not limited to the government.

Few NGOs, including the Bulgarian Helsinki Committee, support the LGBTI community. After decades of silence, ‘Shalom’, the organization of Bulgarian Jews, has started supporting the Pride Parade this year, some 16 months after Robert Singer, the Chief Executive Officer of the World Jewish Congress, asked it to do so. Even within the Jewish minority in Bulgaria, the move has led to a controversy.

Apart from the LGBTI community, the Bulgarian Roma, Bulgarians with a Turkish background and refugees are being discriminated in the poorest E.U. country. Violent attacks against human rights advocates and people of color, including tourists, are a regular occurrence.

Nazi gangs in Sofia keep on protesting against the Pride Parade. Recently, the Sofia Police Department has managed to keep the haters away from the parade. A few years ago, Pride Parade participants were attacked by Nazis.

The Bulgarian Embassy in Berlin has not reacted to the solidarity event right in front of its building, as usual. But a member of the Greens in the Berlin House of Representatives showed support. FemBunt, a group of Bulgarian feminists living in Berlin, organized the rally.