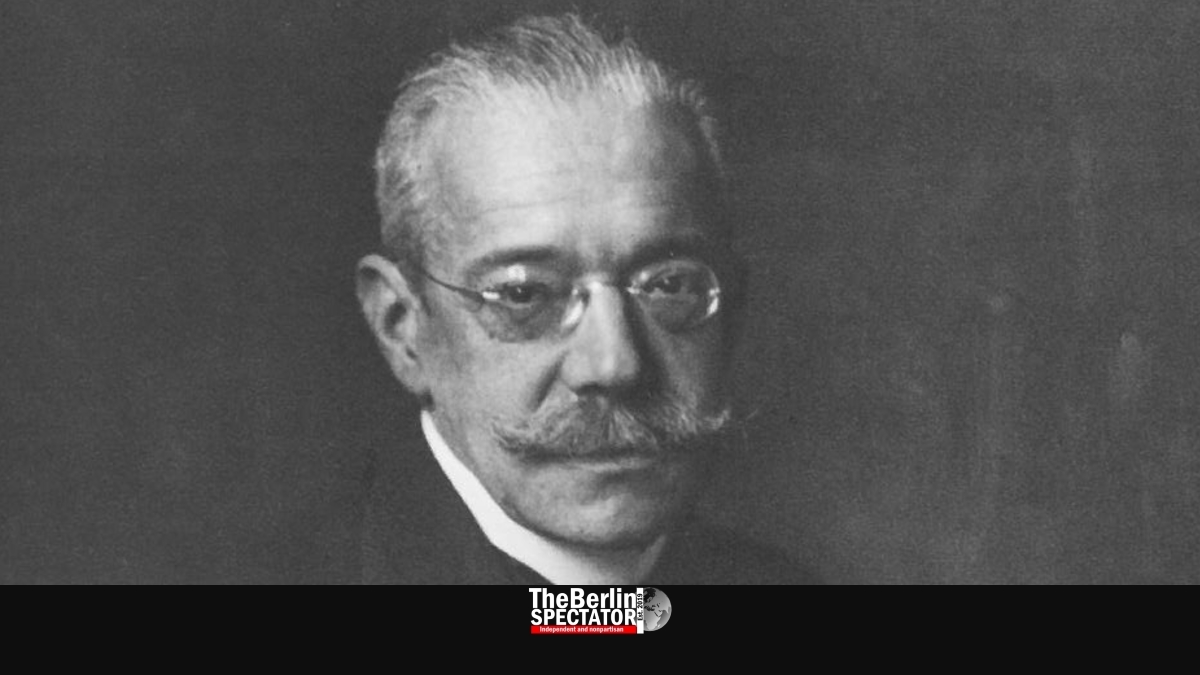 In Berlin, Chancellor Angela Merkel and Governing Mayor Michael Müller will inaugurate the James Simon Gallery on the city’s Museum Island today. It honors the late James Simon, an important patron of the arts who also gave to charity. The stunning building is the new pride of Berlin, which welcomed 13.5 million tourists last year alone. Of course the object came with a price tag.

James Simon was 81 years old when he died in 1932. The grandson of a Rabbi fortunately never witnessed Hitler’s seizure of power. He was born into a lot of wealth accumulated by his father Isaac Simon and his uncle, who had founded a men’s clothing and cotton import business.

A few decades later, their heir James Simon would become a distinguished patron of the arts. He also invested a substantial part of his wealth into social and other charity projects, but never made a big fuss, meaning he tried to stay in the background.

Apart from being an entrepreneur as well, James Simon became an important counselor to Wilhelm II. Whenever the King of Prussia had to take any decisions connected to the Jewish citizens, James Simon was called upon in order to offer advice.

A day before the James Simon Gallery was inaugurated by Chancellor Angela Merkel and Berlin’s Governing Mayor Michael Müller, meaning yesterday, Müller said with the name-giving of the new building, an “important Berliner and patron” was honored.

Berlin, the town of culture, owed a lot to James Simon, Müller stated, including the Nefertiti Bust which had become “the emblem of our city”. The patron gave the bust to the Egyptian Museum of Berlin. Its collection, including the famous object, can be admired at ‘Neues Museum‘ today, located on Museum Island.

The new James Simon Gallery is the new entrance point to the latter. It is part of what the Germans call a “Masterplan” for the Spree river island which accommodates five museums:

Also because of the constant tourist invasion (the ‘Pergamon Museum’ alone welcomes a million visitors per year), the Island needed a welcome center at which the flow of visitors could be organized.

But the new James Simon Gallery is far more than that. Apart from its impressive beauty, it has a lot of room for special exhibitions. That way, it will relieve the five museums to a certain extent. The Gallery will be connected to all museums via underground corridors.

David Chipperfield, the renown British architect, designed the James Simon Gallery, but it was a “schwere Geburt”, a “difficult birth”, as the Germans say. Chipperfield’s first draft, a prominent glass construction, triggered a lot of criticism. Suddenly, many Germans, including TV show hosts, had become architecture experts.

The final design is the third one Chipperfield presented. It was supposed to incorporate the style of the five island museums without copying it, and include more modern elements too. In the end he succeeded, while the construction was another “difficult birth”.

Long before the actual construction work for the Gallery started in October of 2013, workers needed to run as many as 1200 huge poles into the ground, in order to prepare for it. Today, on the day of its inauguration, the James Simon Gallery looks absolutely stunning.

“The Berlin Museum Island as a World Heritage Site is the crown of the museum landscape of our city and a jewel of the cultural city of Berlin”, Governing Mayor Müller said before joining the inauguration event. “With the James Simon Gallery by ingenious architect David Chipperfield, this crown now gets a new radiant stone. This elegant new entrée of the entire complex proves that 21st-century architectural art is equal to the work of former master builders. We thank David Chipperfield.”