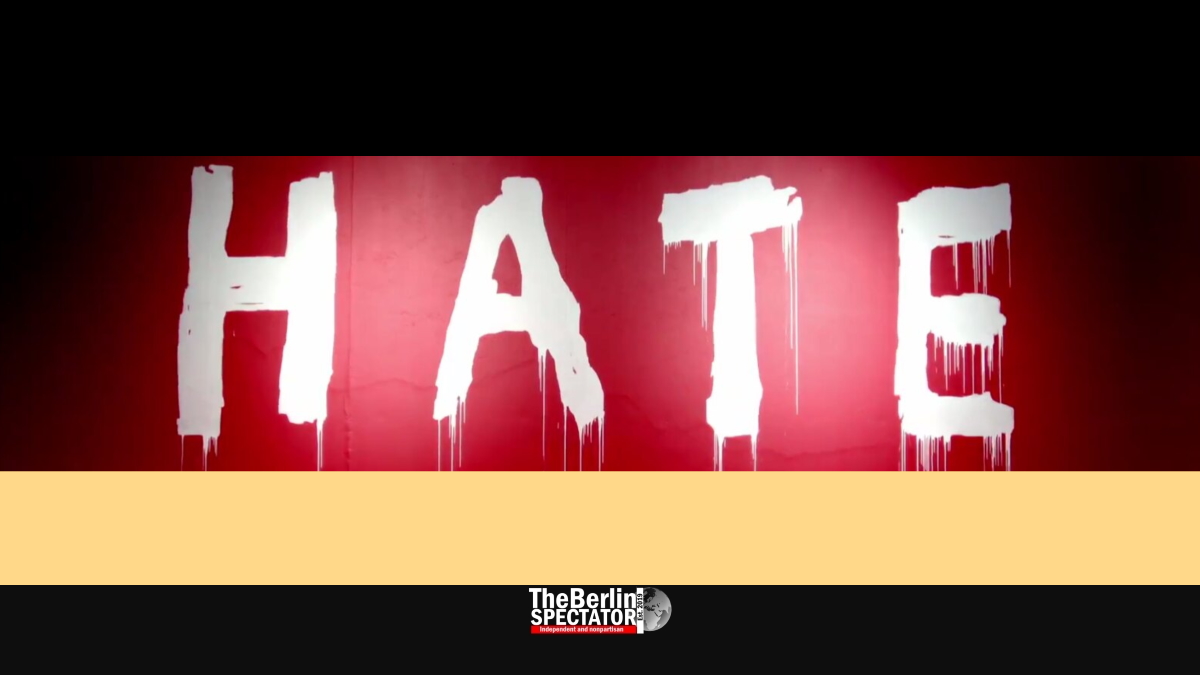 In Germany, hatred seems to have reconquered the country, especially online. Less than three weeks before Brandenburg and Saxony face state parliament elections, it looks like hatred will win at the ballot too. The Berlin government seems helpless, but the prosecution in Bavaria and Hesse took action.

Some two years ago, in 2017, asylum seekers in the Bavarian town of Deggendorf staged a protest. They demanded an end to deportations and better food at their refugee accommodation. Since migration is the favorite subject of the ‘Alternative für Deutschland’ (AfD), a party which built its big success on xenophobia, according to critics, its floor leader in the Bavarian state parliament, Katrin Ebner-Steiner, was on site.

She streamed a live video of the rally of Facebook. That stream was later reposted by the AfD in Deggendorf and the Bavarian division of the party. From the perspective of the AfD, the presence of refugees from the Middle East and Africa is scandalous. The fact that they protested was far too much for many supporters of the extremist party.

What followed took the masks of hundreds of AfD supporters. As the Bayerischer Rundfunk, the Bavarian division of the German radio and television network ARD reported first, the prosecution started working on the AfD’s post. This was not so much about the post itself, but the comments users left under it.

“Scum” was one of the most harmless comments. Some Facebook subscribers felt the urge to express what they really thought, by saying the refugees should be sent to Auschwitz and gassed. Some of these haters commented using their real names, others hid behind aliases.

Hate speech online is a subject Germany has discussed for years. In Europe, Facebook and other social media sites were forced to do something about that spreading phenomenon. But the prosecution was watching as well. It started investigations against as many as 246 individuals, because many comments were so bad they did not only fit the definition of hate speech but also constituted incitement.

In some cases, the investigators did not manage to find users with aliases, in others they did. A total of 300 interrogations were conducted in the case. It was all about the comments under one and the same AfD post on Facebook.

By now, two years later, many commentators have already been convicted to pay fines of up to thousands of Euro each. Some of the haters already paid. Police in several federal states within Germany worked on these hate speech and incitement cases. Regarding the latter, trials were announced.

The Internet is Not Extralegal

By taking action against hate speech and incitement, the Bavarian authorities showed one thing: The Internet is not extralegal. Just like in real life, crimes will be investigated and penalized.

But there is something else the shocking Deggendorf cases unveiled: Many AfD supporters actually seem to think like the original Nazis did during the worst part of Germany’s recent history. This kind of thinking, if it can be called that way at all, will not be erased with a few trials and fines, as everyone involved knows. Still, the action taken by the Bavarian authorities was applauded as an (overdue) step in the right direction.

While some voters seem to be choosing the AfD as some kind of a valve they can use to let off steam against their frustration regarding the job market or other aspects, many support it because they are actually haters, democratic politicians believe. Michael Kretschmer, the governor of Saxony, a federal state in which the AfD could become the strongest party in the upcoming elections, recently said the AfD and the NPD, a party which does not even try to hide its Nazi mentality, were comparable.

In two more eastern German states, Brandenburg and Thuringia, elections are coming up as well. The AfD might win in Brandenburg as well. Many believe hatred will be spread via the ballots in these cases. The AfD itself, on the other hand, says it was banning hate speech commentators from its social media channels.

Two and a half months ago, in early June of 2019, Walter Lübcke was murdered. He was found on his terrace with a shot gun wound to his head. Shortly after, he died at a clinic. A far right extremist by the name of Stephan Ernst confessed to the murder afterwards, but withdrew his confession later. It might take months until the trial begins.

Prosecutors believe they already found the motive. Before he was murdered, Lübcke, a district president from the city of Kassel and a prominent member of Chancellor Angela Merkel’s conservative CDU, had defended refugees’ rights and Germany’s migration policy during a discussion shortly before.

The Tip of the Iceberg

But the murder itself is not the only case the prosecutors in charge are investigating. Just like the refugee protest in Deggendorf, it triggered a wave of hate speech online. Here, the authorities in the Hesse province have started proceedings in more than 100 cases, according to German-language media reports.

The two cases are just the tip of the iceberg. Along with the ongoing successes celebrated by the extremist AfD, they are symptoms of an alarming development which did not just start yesterday. The governments, on both the federal and state levels, and the authorities in general seem to be almost helpless.

Hatred of this kind obviously does not stop at the junction between the online world and reality. The Lübcke case is one the very few murders committed by right wing extremists since Nazi Germany was defeated 74 years ago, and the first one in a while.

In the meantime, the number of non-lethal attacks driven by hatred is skyrocketing. In Berlin, Rabbi Yehuda Teichtal was insulted in Arabic and spat at two weeks ago. German Foreign Minister Heiko Maas and others reacted by taking part in a so-called ‘solidarity prayer’ for the him.

“It is repulsive, disgusting and it angers me when Jews in Germany are being insulted and spat at”, Maas said at the event. At the same time he rejected attempts to exploit the incident politically. Some were trying to divide society “by pretending antisemitism was an imported problem exclusively.” They tried to separate right-wing, left-wing and Muslim antisemitism, Maas told the participants.

The attack on Rabbi Teichtal triggered a discussion about the question whether the laws are strict enough. Some of those who believe they are say the legal system needed ways to identify antisemitic attacks, which would be punished harsher than other cases without that aspect.

Hatred on the Schoolyard

In Munich, Hamburg and Cologne, similar attacks against Rabbis were recently reported. Of course most Rabbis can easily be identified as Jews, but the attacks affect many other Jews too. In Berlin alone, more than 1000 antisemitic incidents were listed by the NGO RIAS in 2018. Those included attacks and threats.

Jewish parents are forced to take their children out of state schools, where they are being bullied for being Jews. Germany’s Federal Office for the Protection of the Constitution recently conceded “the antisemitism spread by Islamist groups and individuals” was a “considerable challenge for a peaceful and tolerant cohabitation in Germany.”

Antisemitism, a kind of hatred which looks even more disgusting in Germany than it does in other countries, is not limited to young haters on schoolyards. Even German diplomats seem to be susceptible.

Bernd Erbel, a former German Ambassador in Iraq and Iran, was supposed to lead INSTEX, an organization which is supposed to deal with payments for the Teheran regime. But the plan was cancelled after Erbel agreed to be interviewed by KenFM twice, a website run by a known antisemite who keeps on spreading conspiracy theories about Jews and Israel. During those interviews, Erbel made outrageous statements about Israel.

In another recent case, it turned out that a social media account belonging to Christian Clages, the Ramallah-based German representative in the Palestinian areas around Israel, had ‘liked’ antisemitic posts. The Foreign Ministry was forced to step in after the ‘Bild’ tabloid reported about the scandal.

And after the Berlin Bundestag finally adopted a resolution which condemned the BDS movement as antisemitic, a well known news magazine started attacking lobbyists who helped with the resolution’s wording.

But not only Jews, but also other members of other minorities and individuals who stand up for freedom, democracy or asylum seekers have reason to worry. About the upcoming state elections in three eastern German provinces, about ‘hunting lists’ right-wing extremists upload, about violence and murder, about the hate speech which triggers all of the above.