Kalotina: The Worst Border Crossing of them All 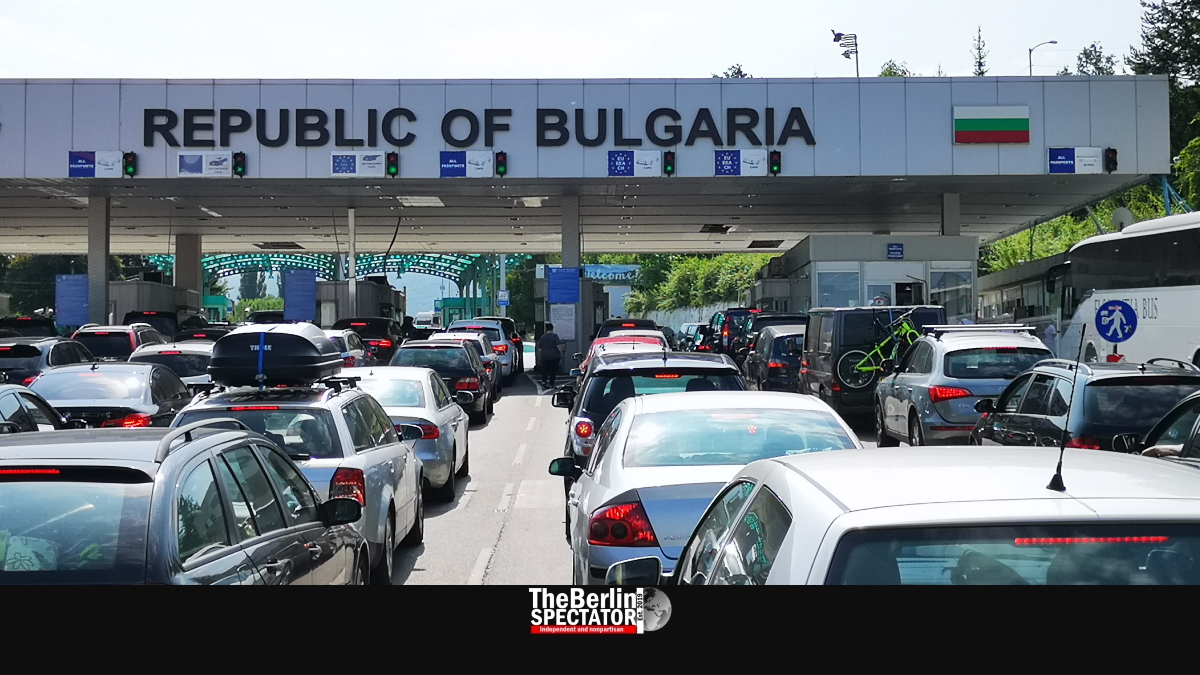 Europe has lots of tiny countries. Thanks to the European Union, many of them feel like one and the same country, at least sort of. Travelling from A to B is easy, unless you need to cross Bulgarian borders.

Counting Denmark in, that kind of direct route includes eight countries, but only three guarded borders need to be crossed. First, the Hungarian-Serbian one comes up. It is the outer border of the Schengen States at the same time, as well as an outer E.U. border. That is because Serbia is not an E.U. member.

Especially in summer, when thousands of vacationers go to south-eastern Europe, and when even more Turks join them on the long way to see their families in Istanbul, Ankara, Cappadocia or elsewhere, that Schengen border requires some patience, some time and a good car which won’t overheat while moving an inch per minute for four hours in the summer heat, at 3:00 a.m..

Ahmed is in this situation with his family. He is driving them from Cologne to Istanbul and has not slept even for a minute. At this ungodly hour, he would not win any beauty contest since he is tired as hell. His face looks grey. But he is determined to do the trip in one go. His wife does not drive. So it all depends on him, and those three guarded borders he needs to pass are slowing him down.

So, yes, that border crossing close to the Hungarian village of Röszke is pretty bad, but it is paradise compared to the next one, located some 550 kilometers (342 miles) further south-east, the one which separates Serbia and Bulgaria. In a border evaluation, Röszke should get 3 out 10 points, while the one near Kalotina would score 0 out of 10.

I have known that border since 2002. Back then, Bulgaria was not part of the E.U. yet and the corruption was even worse than today. The border guards would milk everyone, including Turkish families living in Western Europe and truck drivers. Also they were part of the smuggling business. At this very border, I have seen old ladies who hid a hundred packs of cigarettes each under their wide dresses.

In 2003, the guards on the Bulgarian side of this border felt so confident they just put up signs saying “Entry fee: 22 Euro”. All of a sudden, everyone had to pay for entering one of the most corrupt countries in Europe. In those days, complaining in Brussels did not have any effect yet, since the E.U. accession was still four years away.

But Simeon Saxe-Coburg-Gotha, who was Prime Minister at the time, supposedly crossed the Kalotina border post unannounced one day in 2003. He is said to have been very angry about the situation. So the signs disappeared, but not the corruption and the more than questionable behavior of the border guards.

Much later, in 2016, when Bulgaria already was an E.U. member, the corruption at all border crossings was still alarming. Truck drivers were milked and complained to the European Commission. Some officers cooperated with human traffickers during the 2015 refugee crisis. Others beat and robbed asylum seekers. Because of pressure from Brussels, the Bulgarian FBI equivalent had entire shifts of border guards arrested in big operations which led to major traffic jams, since no officers were left on duty.

Thirteen years earlier, in 2003, I crossed the Kalotina border on a regular basis. I usually brought along my cute little dog. In one case, a mean border guard stuck his head through my car window and stared the dog in the eyes. She got scared. I never understood what that guy wanted to achieve. Was this about demonstrating power?

Then he complained about my car, asking me why it was so old. When I told him I got it from my uncle after my much better vehicle had been stolen by Bulgarian police officers, he let me go.

Another year or two later, the border guards in Kalotina officially demanded toll fees for the worst roads in all of Europe. Until today, the worst potholes on the way from Hvidesande to Istanbul appear right behind the Bulgarian border. But it was far worse back then.

Between Kalotina and Sofia, the most exaggerated speed limits in all of Bulgaria applied, even considering the bad state of the roads. There was one single reason: Cops in the area wanted their share. They collected bribes, especially from drivers of cars with foreign number plates.

Today, you fight your way through all of those countries before reaching Kalotina, only to find out it is still the worst border of them all. The least of the problems is the fact that the last 200 meters to this Bulgarian border is uphill, when you come from the west. This kind of thing kills older vehicles, especially in summer at 100 degrees Fahrenheit, when their engines are already overheated from waiting in front of the Serbian checkpoint.

The next issue surfaced when it was finally my turn. At one point, the officer in that little booth suddenly stopped looking at my passport and left. It was his break, and he would not interrupt it by just letting me pass. Some ten minutes later, one of his colleagues appeared. Just like the other guy, he was not very motivated.

Just when I thought that circus was finally over, an actual customs officer stopped me, one of those people who would go through trunks and all the luggage. But he asked me whether I was going to the center of Sofia. When I wanted to know why he had asked me, he said one of his colleagues needed a ride to the capital. That guy was standing right next to him.

I did not want any customs guy to place anything in my car or to get me into other kinds of trouble. Plus I had driven 2000 kilometers (1242 miles), I was tired and looking forward to getting there. So I looked at him and shouted “No!”. He let me go.

Behind the border, and behind the first of billions of Bulgarian potholes, a hut saying ‘Vignette’ waited for customers. Because last time they had sent me to the next gas station, telling me they had toll stickers for trucks only in that hut, I went to the gas station directly. But Bulgaria would not be Bulgaria if they had not sent me back to that hut.

The next issue is the road between the Kalotina border crossing and Sofia. Because of agreements between Serbia and Bulgaria, Belgrade already had a freeway built from the border all the way to Niš. About two thirds of that road are already in service. It slashes the driving time in half.

The Bulgarian End of the Bargain

The Bulgarians, on the other hand, did not do anything, even though their end of the bargain just amounts to 35 kilometers, while far more, 116 kilometers, had to be covered on the Serbian side, including tunnels through several mountains.

Only now, many years later, is Bulgarian starting to construct a freeway to the border. Someone in Sofia seems to have understood that a proper road connection is absolutely necessary, and has been for decades, for the industry, for travelling citizens, tourists and transit travelers, including the many Turks who want to see their families back home in summer.

I have crossed many borders in my life. Kalotina has always caused the most problems and headaches. It will probably never change.

There is a German version of this article. Find it here.