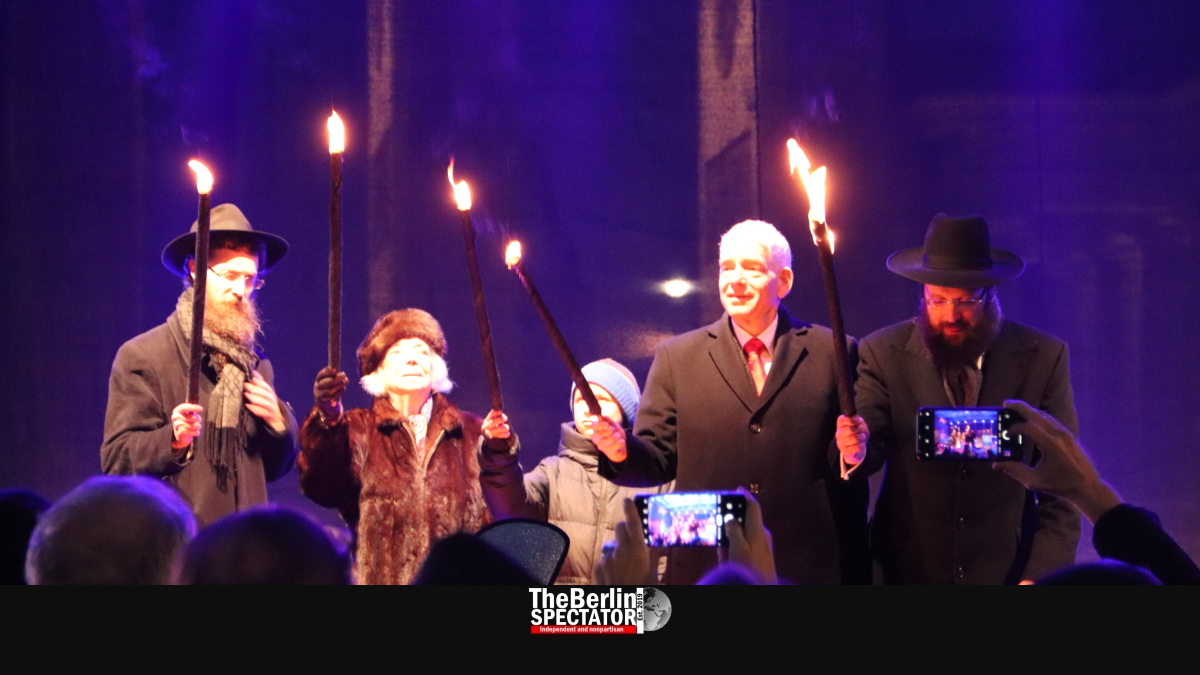 In the heart of Berlin, a giant Hanukkiah was lit during a ceremony at Brandenburg Gate today. Many Berlin Jews took part. So did Josef Schuster, the President of the Central Council of Jews in Germany, one minister, two ambassadors and the Holocaust survivor Margot Friedländer.

A girl from Berlin’s Kreuzberg district whose parents and brother were murdered in Nazi death camps tried to survive the war, but she was betrayed and taken to Theresienstadt. The fact that she survived this concentration camp was a miracle. With her late husband, she moved to New York City after the war, where she lived for 64 years.

In 2010, she returned to Berlin. At the age of 98, Margot Friedländer visits schools and other institutions on a regular basis, in order to talk about her life. And she was part of the Chanukkiah lighting ceremony on the first day of Hanukkah at Brandenburg Gate today.

She was joined by several hundred people, including Josef Schuster, many rabbis, Germany’s Justice Minister Christine Lambrecht, the Israeli Ambassador to Germany, Jeremy Issacharoff, his U.S. colleague Richard Grenell, Rabbi Yehuda Teichtal and many others.

Before the first light of the giant Hanukkiah at Brandenburg Gate was lit for the 15th time in just as many years, Rabbi Teichtal said the Jews of Berlin and Germany would not give in to darkness. Light prevailed over it, he stated at the beginning of Hanukkah, the Jewish festival of lights.

Yehudah Teichtal said there was hatred in “our society”, but “we are here to stay”. Jewish life in Germany would develop further, in spite of the rise of antisemitism. The latter was poison, no matter whether it came from. Rabbi Teichtal thanked Governing Mayor Müller for standing up to hatred, and Margot Friedländer for being “an inspiration for all of us.”

Justice Minister Christine Lambrecht said Jewish life in Germany needed to be defended “with everything we have”. The light of the Hanukkiah was a reminder, but also a symbol of cheerfulness. Governing Mayor Müller, a Social Democrat just like Lambrecht, said peaceful togetherness was not for free. Everyone needed to do something against antisemitism and other forms of hatred.

Thirty years after Brandenburg Gate was reopened, to the day, Müller said it was a blessing “to all of us that we can live in peace and freedom.” He stated Jewish life “in the middle of our city” was a blessing too. The Governing Mayor thanked Rabbi Teichtal for his ‘now more than ever’ approach.

Josef Schuster, who had just hosted the Jewish Community Day, a four day event in Berlin with more than a thousand participants from all over Germany, said in spite of the increasing hostilities he felt at home here. The year 2019 had not been an easy one for German Jews also since the attack in Halle had shocked the community. Afterwards, the solidarity expressed by non-Jewish Germans had been positive.

Josef Schuster and Yehudah Teichtal reached the top of the giant Hanukkiah on a crane before they lit the first light, in the heart of Berlin, a free city, thirty years after the Wall came down and the Gate was reopened. Happy Hanukkah.