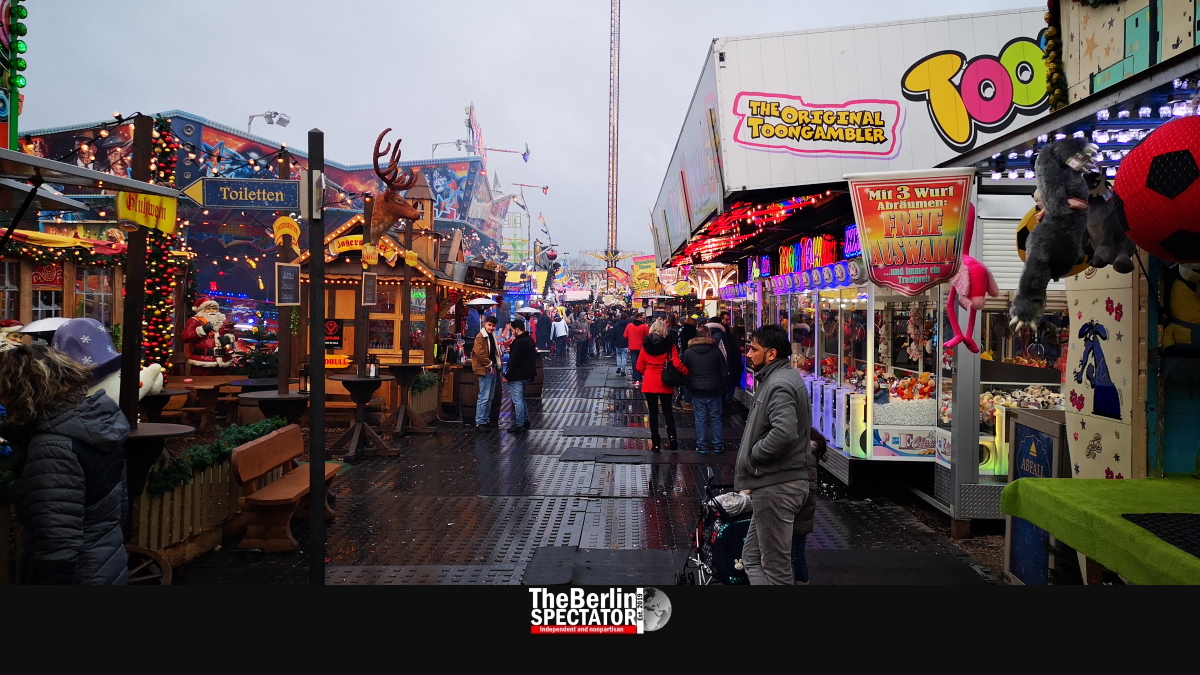 During the ongoing Christmas and New Year’s holiday, Berlin is a different city. Many Berliners who stayed mingled at its sightseeing spots, museums and an amusement park, in the rain.

The German Museum of Technology is a great place to spend hours at. There is nothing better than inspecting locomotives, ancient TV sets and vintage cars. Except during the days between Christmas and January 2nd. It seemed all Berlin families had invaded that place by the early afternoon on Sunday. Playing children ran into visitors every few seconds, a crying baby was heard in every single corner of the museum’s fascinating locomotive shed. The crowds around all exhibits made things a little difficult.

At least the museum was warm and dry. Just a few days earlier, on December 25th, thousands of Berliners had hit a huge Christmas fair, one with carousels and other amusement rides at ‘Landsberger Alle’, in the rain (see main photo at top of page). The largest number of smiles was counted here, as visitors crashed into each other in bumper cars or had their digestion taken care of in roller coasters. The crowds here did not even seem to notice the rain.

Considering the fact that tourists usually do not come to Berlin that much during the Christmas holidays, Checkpoint Charlie, one of the German capital’s main sightseeing spots, was pretty crowded on Saturday. As always, dangerous situations were observed when visitors crossed ‘Friedrichstrasse’ or ‘Zimmerstasse’ without checking the traffic first. This intersection should probably be turned into a pedestrian zone ASAP.

At Brandenburg Gate, the lightness of being was somewhat impaired since the attraction was accessible from its eastern side only, where a big Hanukkiah showed that there is Jewish life in Berlin, almost 75 years after Nazi Germany’s unconditional surrender and the liberation of Auschwitz. On the Gate’s western side, crews were busy setting up stages and giant loudspeakers for an upcoming, loud New Year’s Eve party.

At East Side Gallery and ‘Oberbaumbrücke’, two more prominent sightseeing spots, the usual crowds had shrunk on the last December days due to the cold wind in Berlin. Members of the few tourist groups on site seemed to be freezing their behinds off as they were guided along one of the last parts of the Berlin Wall.

A protest staged by Indian expatriates right in front of Brandenburg Gate was one of the last of a total of around 5000 rallies of this kind in Berlin this year. On December 28th, 2019, the Indians demonstrated against police brutality and violence against women in their country.

In contrast, virtually all other areas in Berlin were empty. Since stores were closed on December 25th and 26th, shopping sprees at the Spree river or elsewhere in the city were cancelled. In residential parts of Berlin, it was easy to get parking spots. The quietude in the ‘Neukölln’, ‘Kreuzberg’ and ‘Charlottenburg’ districts felt good.

But New Year’s Eve will be rather loud, as thousands will light their fireworks and firecrackers. Many bands, not all of them are good, are scheduled to play at Brandenburg Gate, in order to turn Berlin into what it usually is: a loud city with a lot of life on its streets.