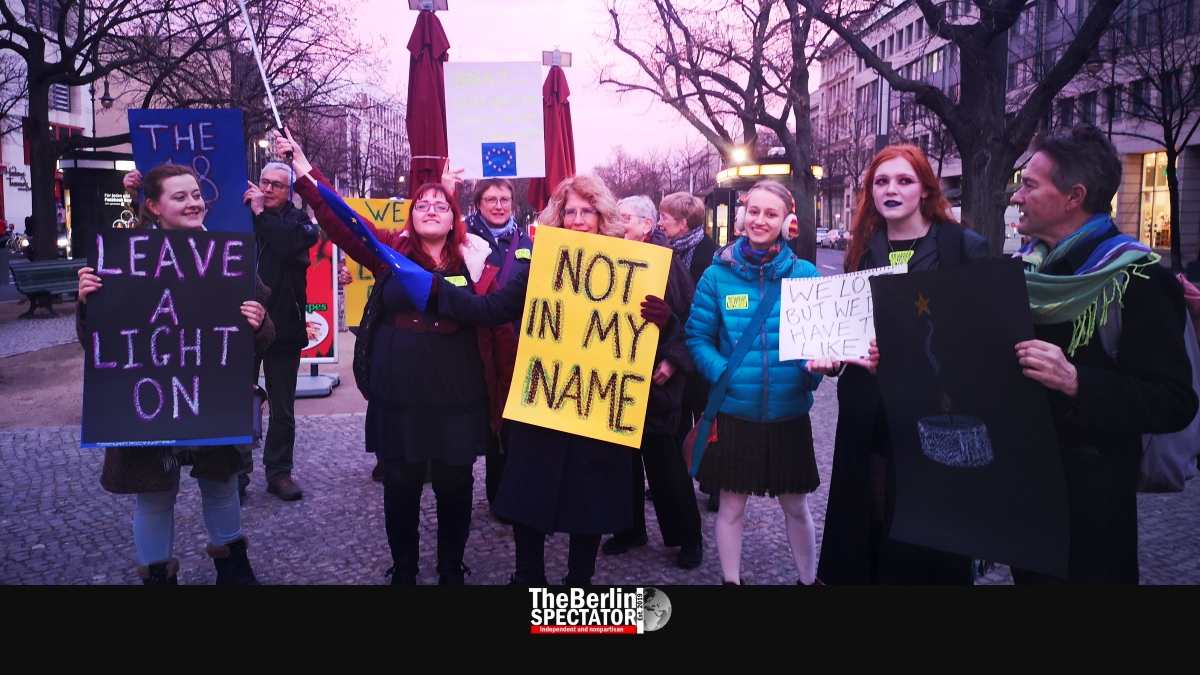 A few hours away from Brexit, a group of Britons living in Berlin took part in a protest entitled “Leaving Reluctantly”. Berlin’s Governing Mayor Michael Müller, who is a Brexit opponent as well, said London would always be European.

Holding signs saying “Leave a light on” and “Not in my name”, some twelve Britons who live in Berlin gathered close to the British Embassy on Friday. Symbolically, they said they wanted to “say goodbye to the European Union and express our grief over the self harm mission also known as Brexit.”

Since they were not allowed to stage their protest right in front of the embassy building, they chose the intersection of ‘Wilhelmstrasse’ and ‘Unter den Linden’ street. From that position, they could see both their embassy and Brandenburg Gate. Since the summer, Britons in Berlin had organized several protests against Brexit right in front of the Gate.

Especially British expatriates who live all over the European Union know what kind of advantages the United Kingdom’s E.U. membership gave them. Even after Brexit, they are far from giving up. “The campaign to rejoin starts tomorrow”, one of the protesters told The Berlin Spectator.

In the meantime, Berlin’s Governing Mayor commented on Brexit by saying Berlin and London had “maintained a close and active city partnership for 20 years now. (…) People of different faiths, nationalities, and lifestyles from almost every country in the world live together peacefully in both cities. Against the backdrop of the destruction and the suffering of World War II, both cities have experienced a new heyday in, and because of, a united Europe”, Müller stated.

“They live the idea of a united and peaceful continent. Berlin owes a lot to the United Kingdom and to London. That applies to the liberation from National Socialism and the preservation of West Berlin’s freedom during the Cold War, as well as to the period after the continent was no longer divided into East and West”, Müller’s statement, written in excellent English, read.

The Governing Mayor said he deeply regretted the withdrawal of the United Kingdom from the European Union. “We will maintain our close ties to London, for instance, in the areas of culture, higher education, and research. If possible, will step up our cooperation. We want British citizens to continue living in and enjoying Berlin and to keep contributing to our social and economic well-being.”

Müller also expressed his hope that Berliners would still be able to live and work in London after Brexit, “and that students from our schools will still have access to the British way of life and the United Kingdom’s long democratic tradition in youth exchange programs.”

“(London Mayor) Sadiq Khan and I agree – and we want to underscore this once again – that London will always be European”, Berlin’s Governing Mayor added. “All over Europe, other cities and capitals, including Paris, Warsaw, Budapest, Stockholm, Helsinki, Barcelona, Gdansk, Dublin, and Milan” were sending that same message.

According to Red City Hall, some 18,000 Britons live in Berlin. During the transition period until the end of this year, there would be “no change in the situation of citizens and companies”, neither for British citizens in Berlin, nor for Berliners in Britain.