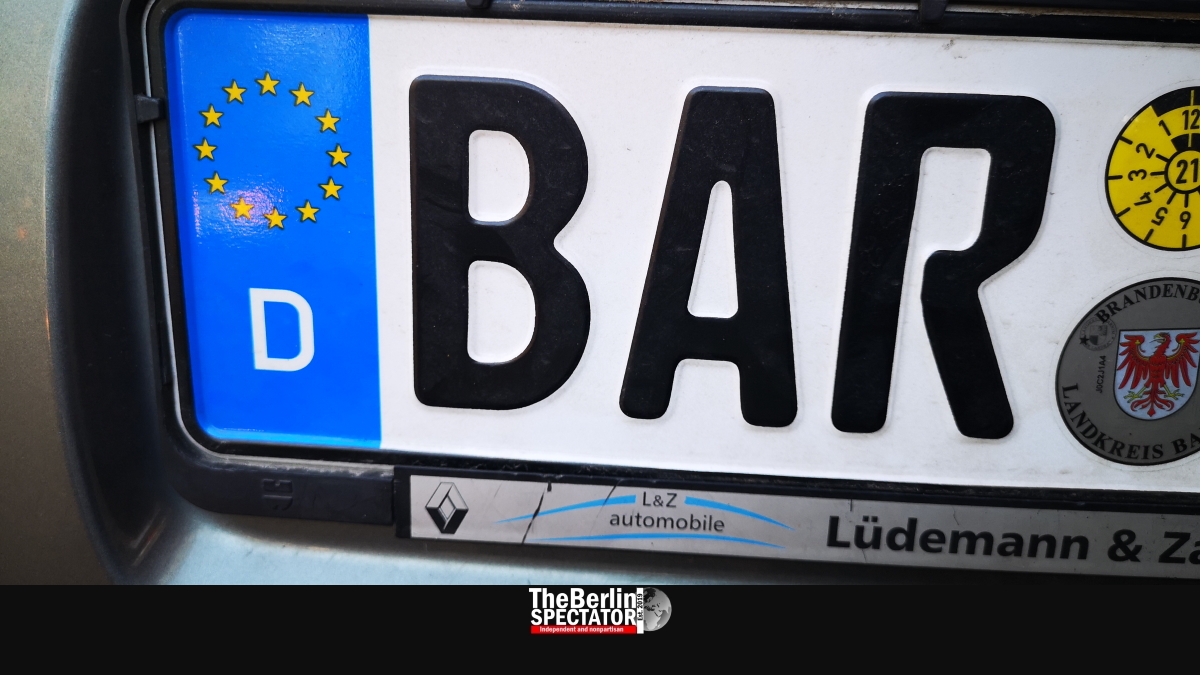 The Berlin Senate has decided to ban cars and other vehicles with three-letter location codes on their number plates. It is the first time a ban of this kind has been put in place.

Berlin, April 1st, 2020 (The Berlin Spectator) — Vehicles with three-letter location codes like HVL, LDS, MOL, OHV or BAR from regions in Brandenburg or any other place may not enter the city state of Berlin anymore. According to the Senate, drivers with registrations of this kind clog up Berlin’s intersections.

Governing Mayor Michael Müller, who started the initiative, said he was glad even the Berlin House of Representatives had given the ban a thumbs up. “In the fight against bad drivers we just had to act”, Müller said. “Berlin will not have them mess up our traffic flow anymore.”

Even the conservative opposition agreed with Müller’s three-way center-left coalition, for the first time ever. Kai Wegner, the chairman of Berlin’s CDU, said the Governing Mayor was right. “Villagers with three-letter location codes on their number plates and cucumbers in their trunks will not cross Berlin’s city limits ever again. Enough is enough. Period.”

According to a documentation put together by the Senate Administration of the Interior, drivers of vehicles with those kinds of location codes “have not understood the main principles of driving”. Therefore they needed to “be banned from participating in Berlin’s traffic.”

The document which was the basis for the ban includes a list of offenses drivers of cars with three-letter location codes are often responsible for. Those include “following the speed limits and therefore becoming obstacles on the streets”. This kind of “despicable behavior” had led to many traffic jams.

“We are tired of this”, the Senate’s spokeslady Toyota Corolla stated. “Do we look like morons or something?” She said people who believed that “we will let farmers and apple pickers from Brandenburg obey traffic rules” needed to think again.

Berliners largely agree with the measure the Senate took. According to a poll published by German media, 28 percent said “Ask somebody who gives a damn”. Almost 12 percent of all respondents said “Leave me alone, you pervert.” And 60 percent told interviewers to leave their message and number because they were not at home. Due to the Corona crisis, the poll was conducted by telephone.

Next week, the Berlin Senate intends to pass a law that will ban drivers of cars with two-letter location codes like PM, TF or PR as well.

The city state of Hamburg wants to follow suit. “I am tired of those OD, PI, WL, SE and RZ codes”, First Mayor Peter Tschentscher said. “If they insist on coming over to Hamburg, they should walk or take the damned bus.” Asked whether Hamburgers themselves would be banned on their own streets as well, because of their HH location code with two letters, Tschentscher said: “Thank you for calling Lufthansa. Your matter is important to us.”

“All of our agents are currently very busy. Please call again at a later time. Thank you. Beeeeeep”, the Mayor stated.