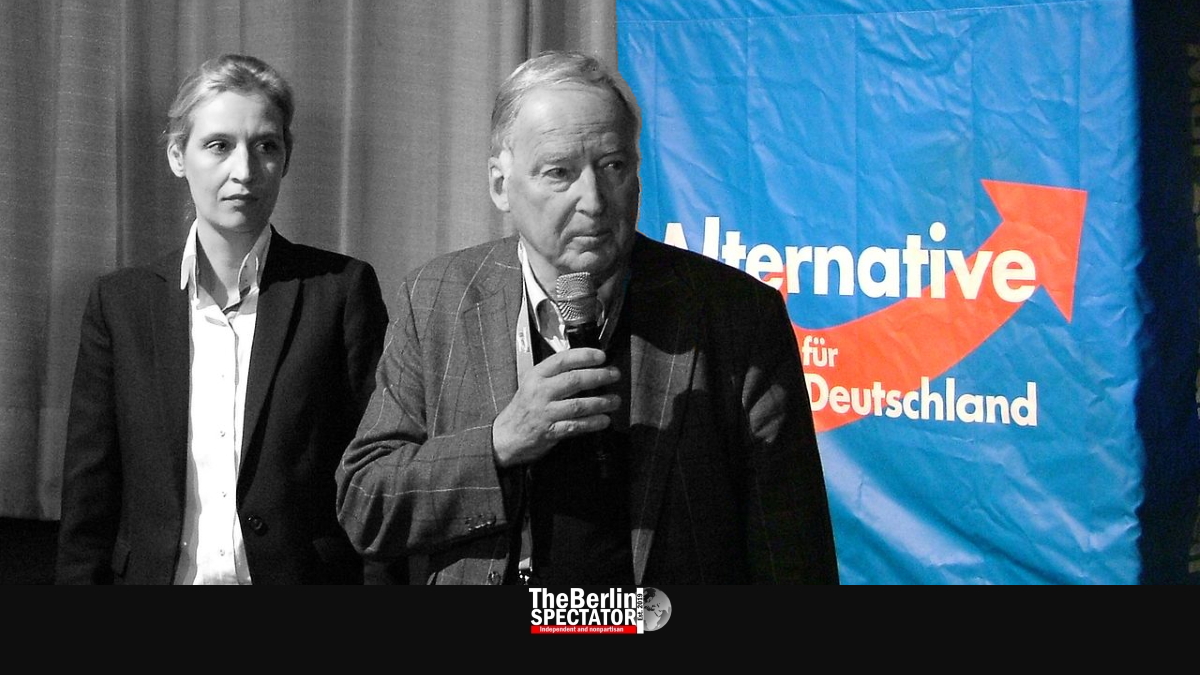 In Germany, the extremist right-wing party ‘AfD’ has conquered the Bundestag and all state parliaments. Many believe this party is a danger to democracy itself. In an attempt to look ‘good’, it just kicked out a prominent member who was part of Nazi organizations.

“The ‘AfD’ wants to destroy our democracy”, Angela Merkel recently said at a meeting, according to participants. It was their agenda. “We see it at the Bundestag week by week.” Merkel reiterated there would be no cooperation between her conservative CDU and the so-called ‘Alternative for Germany’, a week after the Erfurt scandal.

Germany’s constitution is based on the Liberal Democratic Basic Order (‘freiheitlich-demokratische Grundordnung’). It describes the kind of democracy Germany is. Organizations which seem to intend to lever out that order will soon have the Federal Office for the Protection of the Constitution (BfV) on their tails.

In the case of the ‘AfD’, things turned out to be the other way around. In 2015, the BfV had called the extremist far-right party an “examination case”. That invented expression was supposed to say something like this: “Hey, we are investigating you because you might – or might not – pose a danger to our Liberal Democratic Basic Order.”

The ‘AfD’ did not want the BfV to mess with it and had the case looked into by the Administrative Court in Cologne. And the party won. The verdict said the authority was not allowed to call the ‘AfD’ an “examination case”. In other words, the court told the BfV to either investigate the ‘AfD’ or to refrain from it, but not to label the party the way it did.

There is one thing democrats, meaning those who cherish and defend the kind of democracy we live in, have to concede: The ‘AfD’ is very successful. It managed to enter the Berlin Bundestag and the parliaments in all 16 federal states within Germany. And it succeeded in getting there by mostly concentrating on one single subject, which is migration. Like all populist far-right parties in Europe, the ‘AfD’ hates migration.

Is this enough to give the ‘AfD’ the label ‘radical right-wing’? It is not quite that simple. Indeed, the party promotes radical right-wing ideology by attacking rights, including those of asylum seekers, the freedom of the press and equality for all. These are extremist positions that pose a big danger to democracy, many of the party’s critics believe.

On the other hand the ‘AfD’ has not officially called for throwing democracy overboard or installing a regime of the kind the original Nazis had between 1933 and 1945. It has not said it wants to arrest or kill its foes or millions of members of Germany’s minorities, or attack most neighboring countries again.

But there have been quotes by prominent ‘AfD’ members which sounded like Nazi statements. Besides, ‘AfD’ leaders and other members have teamed up with skinheads and other official Nazis in rallies, such as in Chemnitz, a year ago. And the ‘AfD’s entire approach very much points in this dangerous direction, according to researchers.

‘Traitors’ and ‘Enemies of the People’

The language some ‘AfD’ members have used is comparable to that of the Nazis, to say the least. Foes who have expressed criticism have been called “traitors” or “enemy of the people”. The expression “lying press”, and the entire concept of attempting to blame the press for revealing the dangerous path those who use that expression are going is very popular in Nazi circles, among dictators and those who want to be.

All in all, there are several elements which could be regarded as hostile to democracy. Those include the aspect of opposing the process of coming to terms with Germany’s terrible recent history. ‘AfD’ leaders have said things which were clearly intended to downplay the Holocaust. This is another aspect modern day Nazis are known for as well.

Looking into what exactly the ‘AfD’ is doing leads to another interesting impression. It seems this party uses populism to seem more harmless than it is. By suggesting it was a fresh force and a movement for the people which was fighting a political elite, the ‘AfD’ seems to want to pretend it was the only party standing up for justice and the man on the street.

Another aspect shows how close the ‘AfD’ seems to be to the kind of approach Hitler’s Nazis took. Especially in the so-called ‘völkisch’ wing within the party which recently was dissolved, at least officially, the idea of a German people with certain biological and cultural traits has a high priority. The sum of known statements by members of that wing within the ‘AfD’ suggests that, in their view, Germans need to have white skin and to be part of what they define as “the German culture”.

To critics, this sounds like ‘racial laws light’. Björn Höcke, the ‘AfD’s chairman in Thuringia, confirmed all suspicions when he said he was “against mixing the population with groups of people with a different skin color”. The original Nazis could not have said ‘better’.

While most prominent ‘AfD’ members, maybe except for the most extremist ones, usually try to sound like sheep, their followers on social media do not. The prosecution in Bavaria is dealing with Facebook commentators of AfD posts, under which they left more than disgusting Nazi statements. And this is only the tip of the iceberg.

‘Man of the Center’

October 28th, 2019, was an important day on which some people’s eyes were opened. At the Federal Press Conference in Berlin, the ‘AfD’ leadership, including Alexander Gauland, Björn Höcke and Jörg Meuthen, appeared. During this event, Gauland, who is considered more “moderate” by many, called Höcke a “man of the center”.

Even though Gauland later said he had meant his colleague was in the center of the party, it was clear he had meant the political center, also because of the wording of the questions he was being asked. That way, Gauland, the head of the party’s caucus at the Bundestag, showed where he himself really stands. And it was not the first time. For instance, he once said the Germans had to be allowed to be “proud” of what German soldiers “accomplished in the two world wars”, 75 years after WWII and the Holocaust.

The ‘AfD’ might be a product of these times, it might be a symbol of today’s post-factual world and it might be populist. But it definitely poses a danger on top of it all, researchers are convinced. This party obviously failed to conceal the direction it is really taking, because of people like Höcke and the fact that they never threw him out of the party. The biggest problem of them all is that, in spite of it all, 15 percent of all Germans were ready to vote for the ‘AfD’ on the federal level, according to recent polls, before the Corona crisis hit. During the crisis, they lost about one third of their support.

The ‘AfD’s many critics in Germany are hoping the party will tear itself apart like similar parties have in the past. This process might have begun with the Kalbitz case. On May 15th, 2020, Andreas Kalbitz was thrown out of the party because of his former membership in Nazi organizations. He fought his disposal and lost. One interesting point in the process was the fact that, again, prominent ‘AfD’ figures at the Bundestag, who are supposed to be ‘moderate’, opposed Kalbitz’ exclusion in spite of his Nazi contacts.

Andreas Kalbitz is – or was – not just anyone in the ‘AfD’. He headed the party in Brandenburg. Just a few years back, he wrote for extremist publications about an “ethnocide against the German people” and similar ‘subjects’. Until 2015, he headed the organization ‘Kultur- und Zeitgeschichte’ founded by the former ‘SS-Hauptsturmführer’ Waldemar Schütz who was a big shot in the NPD, Germany’s modern day Nazi party. In 2007, Kalbitz took part in a camp organized by the neo Nazi organization ‘Heimattreue Deutsche Jugend’. It was banned two years later.