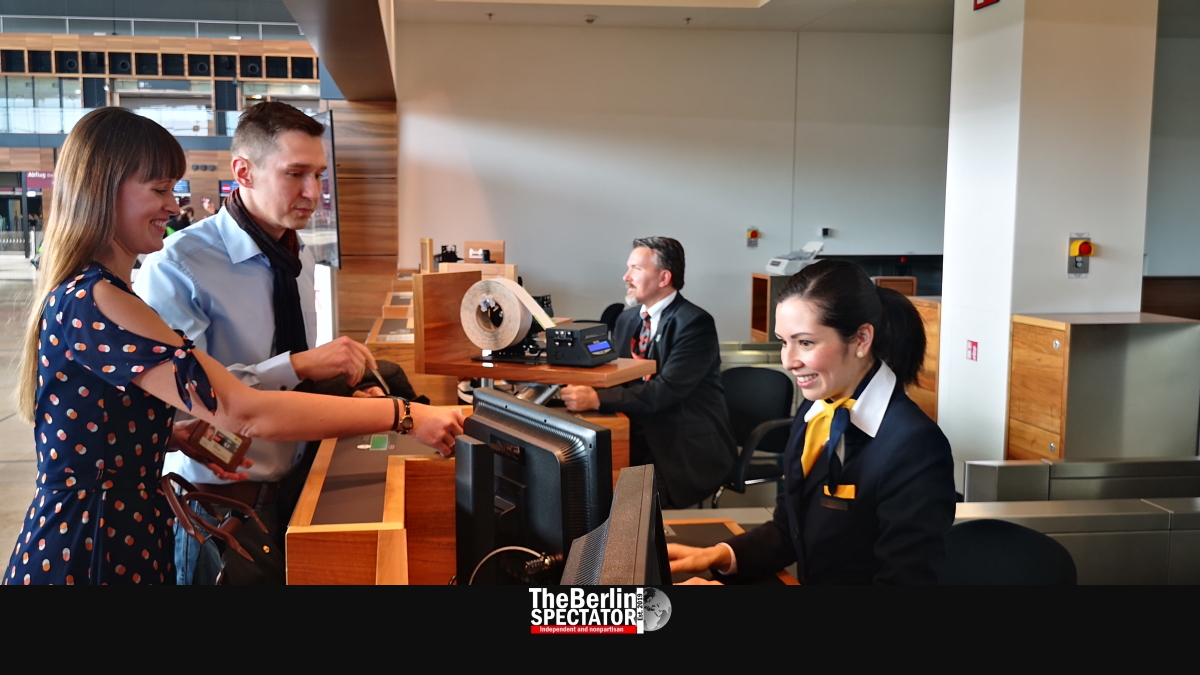 The operator of Berlin’s airports, Flughafen Berlin Brandenburg GmbH (FBB), has a new one that will be put in service in late October of 2020. But there are two things it does not have, namely passengers and money.

Because of the ongoing Corona crisis, things are difficult in aviation. Berlin’s major airports are not alone when it comes to losing money. At this stage, passenger air traffic has even increased a little, from 1 to almost 2 percent of what it was before Corona. But that’s not nearly enough to make ends meet.

Now, months before its activation, BER Airport serves as a parking lot. Lufthansa and others have parked as many as 150 aircraft on its tarmac because they are not being needed during this phase of the crisis. According to FBB’s CEO Engelbert Lütke Daldrup, the owners are paying parking fees. “But we will only earn real money when they fly”, he said during an online press conference on Friday.

Lütke Daldrup repelled a report generated by reviewers according to which his company had slid into a financial imbalance. It even led to calls for his resignation. But the numbers in the report in question had simply been wrong, Lütke Daldrup stated. Besides, auditors had just confirmed that Flughafen Berlin Brandenburg GmbH (FBB) was following all rules.

Still, Engelbert Lütke Daldrup conceded the financial state of FBB was tight. At the same time he stressed the company was convinced it would have air traffic “in a considerable dimension” after the crisis. The new BER Airport will replace Tegel and Schönefeld starting on October 31st, 2020.

“With BER, we are offering an attractive airport”, FBB’s CEO stated. “It offers a wonderful platform for new traffic”, he stated. Lütke Daldrup meant flights to intercontinental destinations, which Berlin hardly had before Corona messed it all up. He is hoping the new airport will have a positive effect on this end as well.

With a capacity of 28 million passengers per year, BER Airport will earn more money than Tegel and Schönefeld made combined, in pre-Corona times, Lütke Daldrup believes. For instance, there will be more retail businesses and restaurants that will generate income. The old airports have very few of those.

FBB’s employees are already testing the new airport. Partners, including airlines and the federal police, which is getting a brand new building at BER, are part of those tests. They involve all areas, including check-in counters, the baggage system, the gates and the train station in the basement under Terminal 1.

“An airport works well, when everyone is involved”, Lütke Daldrup said. He said FBB was confident that there would be an “orderly activation in October”. Originally, hundreds of volunteers were supposed to do the testing now. Those tests were postponed because of the Corona crisis.

In 2019, FBB lost 95 million Euro (102.8 million U.S. Dollars or 84.8 Pounds Sterling) because the construction of the new airport was ongoing through the entire year. The Corona crisis, which does not exactly improve the financial situation, commenced in early 2020.

No Decision on Tegel

But Lütke Daldrup said a rating agency had given FBB an “A1 stable”. He predicted the company would earn 18 Euro per passenger. But he said FBB would need 800 million Euro (866 million Dollars or 714 million Pounds) to make it happen.

What the closure of Tegel Airport is concerned, it might be implemented anytime now or on June 1st the latest. The matter has been discussed for months. With less than 2 percent of the usual air traffic, Schönefeld Airport can easily cope with all air traffic in Berlin, including freight.

‘Moment to Save Money’

“This is the moment to save money”, Lütke Daldrup said. While there was no traffic, Tegel could be closed. Once there was a permit to close it, a final decision would be made. FBB is being owned by the federal states of Berlin and Brandenburg and by the Federal Republic of Germany.

Two months ago, the Ministry of Transport had vetoed a closure of Tegel. Even though it would be a temporary one, officially, it will probably last forever, because Tegel is supposed to be closed for good on November 8th anyway, a week after the opening of BER Airport.