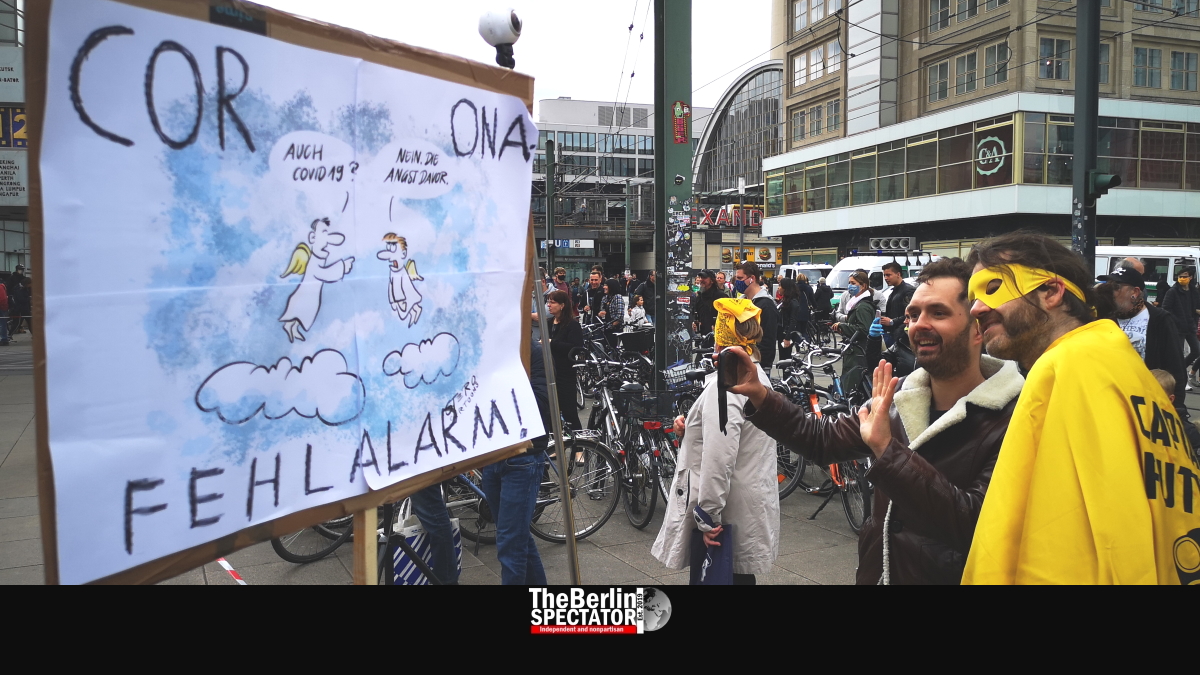 In Germany, thousands of people joined protests against the Corona rules on Saturday yet again. The authorities are worried about the growth of those demonstrations and the involvement of right-wing extremists.

In the world of many conspiracy theorists, the Corona pandemic does not exist and the measures the German government and federal states have taken against its spread are therefore “illegal”. Other protesters in those circles do not doubt the existence of the Coronavirus, but blame the Jews or America for spreading it.

Some say Microsoft co-founder Bill Gates, who has become one of the world’s leading a philanthropists, was to blame. In Germany, there is no limit to the weirdness of accusations spread by crowds of those who form their own reality.

In Berlin, hardly any of them appeared at Rosa Luxemburg Square or Alexanderplatz, where they were expected on Saturday. But hundreds tried to join a rally at the Berlin Reichstag. Police ended what would have become a large protest otherwise. Several people were arrested, some were carried away by police officers. (Read separate article Berlin: Police Prevent Illegal Protests from Taking Place).

A prominent TV chef, Attila Hildmann, joined the largest Berlin protest. He believes the masks people need to wear in public transport and shops, to protect others from the Coronavirus, are a sign for “slavery”. Hildmann serves as a magnet who enlarges the crowds at protests staged by conspiracy theorists.

Several counter protests, against extremists and deniers, took place in Berlin as well. Police made sure the number of participants did not exceed the maximum of 50 people. Each little rally at Alexanderplatz was marked by red and white marker tape.

In Prenzlau, a town in Brandenburg, Andreas Kalbitz took part in a protest against the Corona measures. He said it was good to be “white and German”. Kalbitz was just kicked out of the extremist right-wing party ‘AfD’ because of his membership in Nazi organizations. The involvement of Nazis and other individuals who are members of the far-right is a general problem.

Several protests against the Corona rules were reported in Cologne as well. In Koblenz, the same kind of rally was forbidden because last time the participants had not adhered to the distance or mask rules. In Frankfurt, both conspiracy theorists and counter protesters appeared at Opernplatz (‘Opera Square’).

In front of Hamburg’s City Hall, right-wing deniers and left-wing counter protesters were involved in brawls against each other and with police. While the conspiracy theorists said there was no virus, their foes held signs saying “Right-wing propaganda is not a civil right” and “Solidarity instead of conspiracy theories”. Several individuals were arrested.

In Dresden, Saxony’s First Minister Michael Kretschmer appeared at a demonstration against the Corona restrictions in order to talk to participants. He reportedly discussed matters with them for 90 minutes.

In Munich, as many as 1,000 people joined a similar protest. They opposed a non-existing “muzzle” for critics and a mandatory Corona vaccination that does not exist either. To the contrary, members of the government have said any vaccination, once it was available, would not be mandatory.

According to the Federal Criminal Police Office, Germany’s equivalent of the Federal Bureau of Investigation, more and more right-wing extremists are trying to use the protests against the Corona rules for their purposes. A spokeslady confirmed these kinds of worries in the ‘Frankfurter Allgemeine Sonntagszeitung’ weekly.

Interior Minister Horst Seehofer told the same publication many Germans were worried about their professional existence. Germany needed to act quickly. That way, conspiracy theorists and right-wing radicals would not have the chance to set the tone.