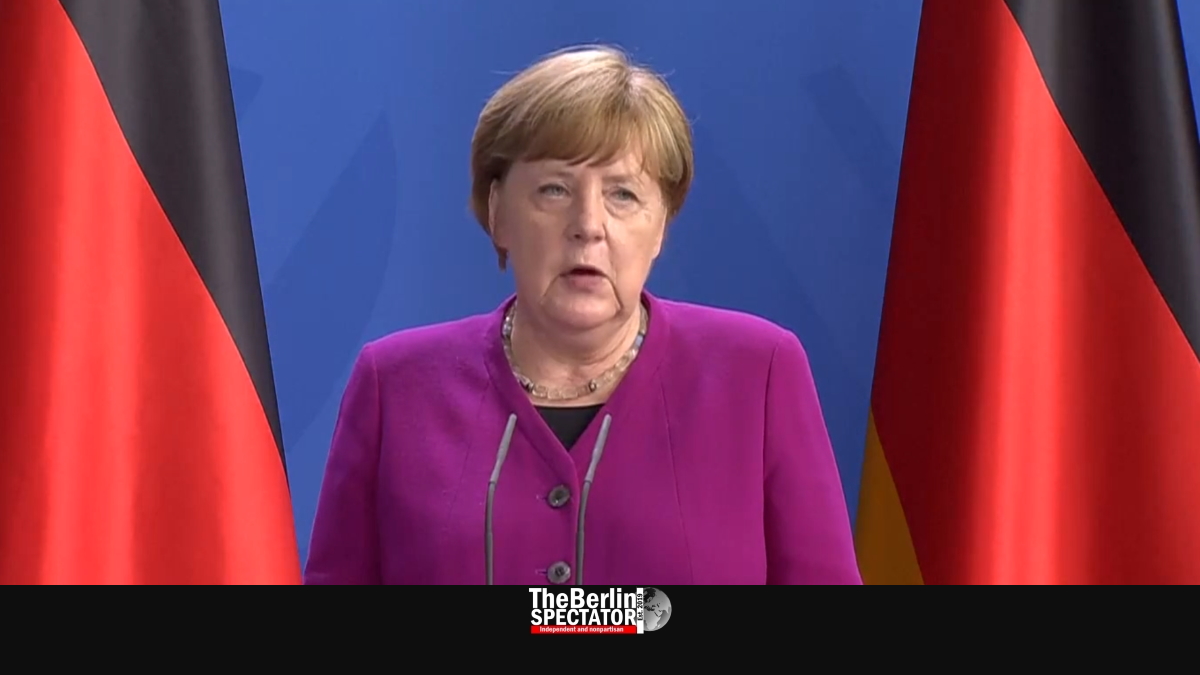 With her French colleague Emmanuel Macron, Angela Merkel introduced a “recovery initiative” with an enormous volume of 500 billion Euro (545 billion U.S. Dollars or 447 billion Pounds Sterling). It did not take long until critics commented on the plan.

The Corona pandemic was the biggest crisis the European Union had ever been confronted with, Chancellor Merkel said during a televised online press conference on Monday. It required an extraordinary, onetime effort. France and Germany were ready to go ahead.

According to President Macron, the tourism sector could benefit from the aid package. Merkel mentioned investments in the digitization and health sectors as well as what she called a “green deal”. European Union states that cannot cope with the financial fallout of the Corona pandemic would be eligible for aid as well.

Macron and Merkel want the E.U. Commission to borrow the giant amount and to return it in the coming years. Merkel said the repayment would take a long time. The recipients of the financial aid would not have to return it, she stated.

The giant loan Merkel and Macron want to go for will have to be confirmed by all 27 member states of the European Union. In Germany, the Berlin Bundestag would need to wave it through. But what may sound easy is actually hard to implement, because there is already opposition to those plans.

Some northern European Union countries reject any such thing. They do not want the E.U. Commission to get a loan of an unprecedented size and just give it away. The Austrian government teamed up with Denmark, the Netherlands and Sweden. For these four countries, Austria’s Chancellor Sebastian Kurz said they rejected the idea of just distributing grants. Any financial aid would have to be given out in the form of repayable loans.

Merkel on the Case

Today, Angela Merkel intends to convince her colleagues in Czechia, Hungary, Poland and Slovakia during a video conference. Convincing Italy or Spain will probably not be necessary since they could benefit from the giant aid program.

Whether the Franco-German advance will prevail is unclear. But all E.U. members agree on one thing: After Corona, something will have to happen. Ursula von der Leyen, the E.U. Commission President, was going to come up with a redevelopment plan for the European economy which might turn out to be up to four times as expensive as the Franco-German proposal.

In the meantime, the number of persons infected with the Coronavirus in Germany is increasing very slowly. The daily number of new infections is low these days. It was less than 200 in the past 24 hours. Whether the recent easing of restrictions will have a negative impact or not remains to be seen.

Because of the way Angela Merkel has handled the Corona pandemic so far, her popularity has risen, both in Germany and abroad. That is why there is talk about a fifth term for her as Chancellor. Merkel herself intends to call it quits in 2021, after sixteen years at the Chancellery. But those around her do not seem to be convinced.

Recently, Interior Minister Horst Seehofer said he had heard calls for a fifth term for Merkel several times and seemed to be approving it. There are candidates for Merkel’s succession, both as CDU chairperson, a position she gave up in 2018, and as Chancellor. But, compared to her, most candidates look rather pale right now.

Corona seems to be changing absolutely everything, including the political outlook. The crisis separates those who tend to spread hot air from those whose statements are convincing to many and whose actions are sustainable. But there is one person who has not said anything about staying in the Chancellery beyond 2021, namely Angela Merkel herself.