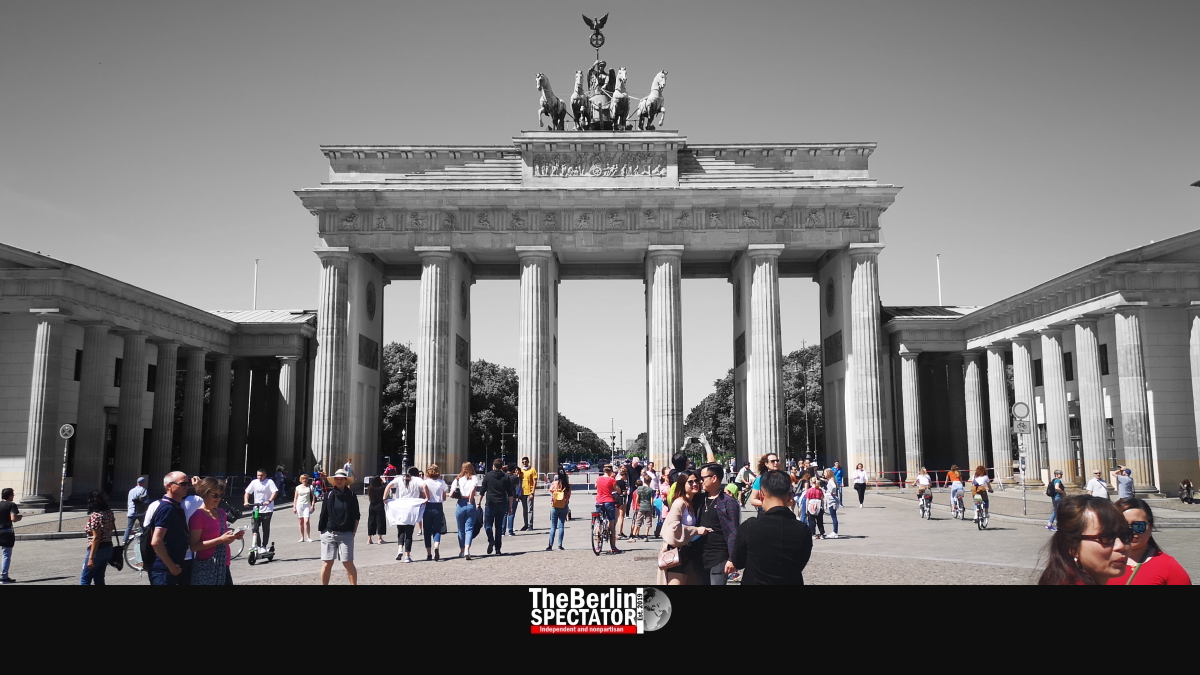 More than a million tourists per month used to come to Berlin before a bad virus with a beautiful name, Corona, destroyed the business. Making the latter bounce back to normal is the purpose of a new advertising campaign Berlin is launching.

Berlin, June 9th, 2020 (The Berlin Spectator) — Four months into the Corona crisis, Berlin is getting down to business. An interesting advertising campaign designed to make tourists come back to the city of cities is being launched right now. The first ad, which works both as a short video clip and as a still image, was just published.

In Berlin, the state-owned company ‘visitBerlin’ is in charge of marketing and advertising. They came up with the convincing campaign. In German, the slogan is “Berlin. Auch das.” the direct translation for which would be something like “Berlin. That Too.” The ad’s clip and picture show the back of a lady sitting on Wannsee beach next to her parasol.

Berlin does offer a lot. The new campaign’s target groups might be surprised about all the water the city has. What they will see is a simplistic ad without all the ‘yadda yadda yadda’ and ‘boom boom boom’ they are being bombarded with everywhere else. The soothing sound of the tiny waves at the lakeshore is all they need to listen to. There is no squiggle and no terrible, monotone “background music”.

The real Berlin is being sold here. The ad convinces with quietude instead of annoying “beats”, and with genuineness. The scene captured is genuine. The lady sitting there is genuine. Berlin is genuine. This city does not need anyone to dress up as a clown or in a sexy bikini. Berlin sells because it is Berlin. Period.

Of course, ‘visitBerlin’ could not resist. There is a landing page people are being channeled to. They overloaded it with information.

Instead of translating the slogan directly into a few target languages, including English, they turned it into “Nature. Berlin has that too!” It would have been good to go for the simplistic approach here too. Lo mismo pasó en español y otros idiomas. But, all in all, the image campaign they launched for tourism in Berlin is nothing less than great.

“Tourism is a key sector in this city, both economically and culturally”, Berlin’s Commerce Senator Ramona Pop, a member of the Greens, stated. As an open-minded metropolis, the fact that we had to do without guests during the pandemic hurts us.” According to Senator Pop, the tourism sector may be stricken right now, but it is also easy to boost. Besides, it does affect Berlin’s entire economy, meaning it might help revive things in the German capital.

During the worst part of the Corona crisis, so far, tourism was dead, not only in Berlin. Absolutely nobody even looked at Checkpoint Charlie. Hardly anyone took photos at Brandenburg Gate. Recently, during the long Pentecost weekend, some tourist returned, but not nearly enough.

Berlin’s marketing and advertising people will be concentrating on domestic tourism for now. They intend to target potential visitors in the key markets, which are North Rhine-Westphalia, Hesse, Bavaria and Baden-Württemberg. But the campaign will also be run nationwide.

Berlin is the city of freedom. Of diversity. Of badly dressed, unpretentious, mostly likable people. It offers two zoos, a million parks, gardens, lakes and rivers, a sightseeing overkill and good food. Culture is not really back yet, but it will be.

One thing is certain: Berlin does not have to pretend to be anything it isn’t. But it does need the tourists to return. Yesterday.

Germany: The Latest Corona Rules in All 16 Federal States