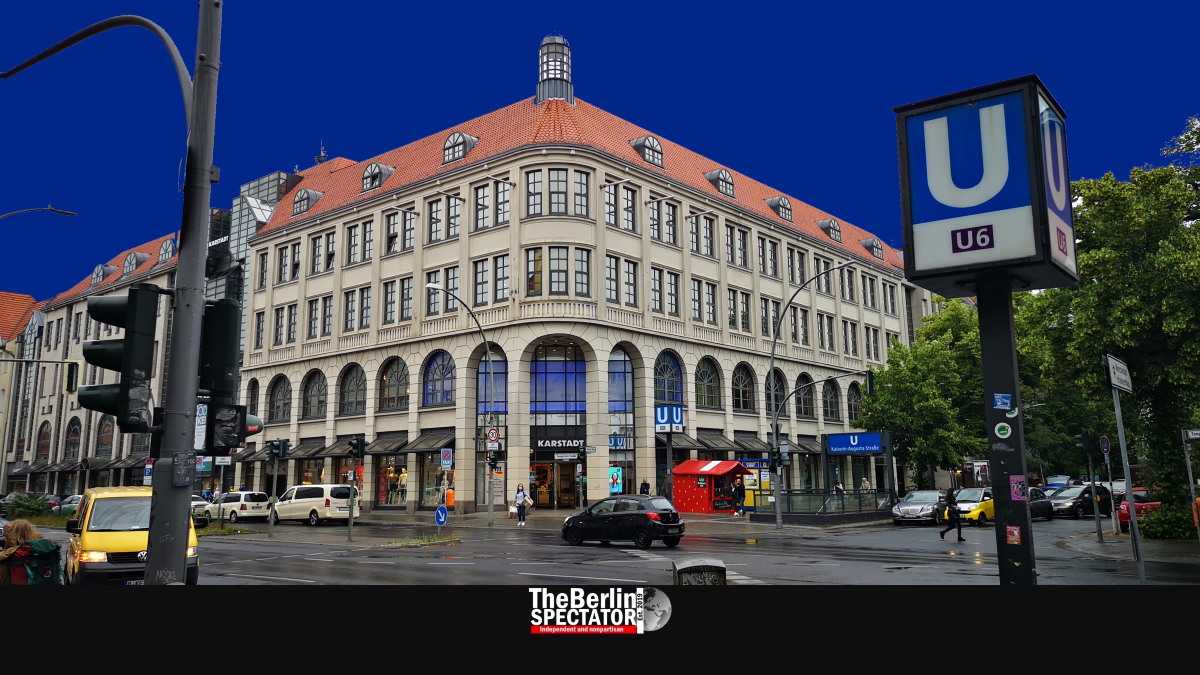 Thousands of jobs will be lost with the closure of 62 ‘Galeria Karstadt Kaufhof’ department stores. While they are shutting down branches, the owners are getting ready to invest hundreds of millions of Euro into buildings.

Berlin, June 21st, 2020 (The Berlin Spectator) — Galeria Karstadt Kaufhof is Europe’s largest department store chain. There are 243 branches of different kinds in Europe, 172 of them in Germany. In June of 2019, Signa Holding from Austria purchased the last shares of the company for 1 billion Euro (1.12 billion U.S. Dollars or 0.91 Pounds Sterling).

Exactly one year later, this week, the company announced it would close more than one third of all ‘Karstadt’ and ‘Kaufhof’ department stores, 62 out of 172. Even though there had been talk about closures before, the news shocked tens of thousands of employees all over Germany.

In Berlin, where six branches are supposed to close, several small protests against the plans were staged. Especially in the German capital, where Signa intends to replace a ‘Karstadt’ building at Hermannplatz square for 450 million Euro (500 million U.S. Dollars or 405 million Pounds Sterling), employees and customers see a contradiction. How does firing hundreds of people and erecting expensive buildings fit together?

The Gropiuspassagen branch in Berlin’s Neukölln district is supposed to close. The same applies to department stores in the Friedrichshain, Hohenschönhausen, Tempelhof and Wedding boroughs. Even in the posh Charlottenburg district, where Signa runs its most exclusive store, the famous ‘KaDeWe’, a branch will be closed.

Berlin’s Governing Mayor Michael Müller is worried. He called Signa’s announcement “a hard blow”, especially for the employees, but also for the city. “Those branches are of central importance to the local supply”, Müller stated. Also, many of them were the centers of neighborhoods they were located in. Müller promised the Berlin Senate would hold talks in order to save as many jobs as possible.

Especially in the Corona crisis, Berlin needs the closure of department stores like it needs hurricanes, hail and earthquakes, namely not at all. It looks like 1,000 out of 2,200 ‘Karstadt Kaufhof’ employees might lose their jobs in the capital alone. The total number of lost jobs will be 5,317, according to virtually all German-language media. At this stage, ‘Galeria Karstadt Kaufhof’ has 28,000 employees.

At a Berlin ‘Karstadt’ branch, a salesman told The Berlin Spectator under the condition of anonymity, the staff had been told the closure of their store would take place on October 31st, 2020, the same day the new ‘Berlin Brandenburg Willy Brandt Airport’, will be inaugurated. All of them were wondering why because their branch was actually not losing, but making money, the staffer said.

A representative for Signa commented on the closures as well. He said there was no other way. “We know what this means for the employees affected. But this step is without any alternative, because these branches endanger the overall existence of the company”, he stated.

There is more bad news. German publications reported on Saturday, Signa intended to close 20 out of 30 ‘Karstadt Sports’ branches as well. This step alone will kill 700 jobs. According to the ‘Kölner Stadtanzeiger’ daily, the stores in Cologne, Düsseldorf, Dortmund, Essen, Hamburg and Munich are among those that will be shut down. The same applies to the ‘Karstadt Sports’ headquarters.

Just months before Corona forced almost all non-food stores in Germany to close for months, including all ‘Karstadt’ and ‘Kaufhof’ branches, things had not looked too bad. The company even bought 125 travel agencies from the bankrupt tour operator Thomas Cook in November. In December, it purchased the ‘Sportscheck’ chain.

After talks with the ‘ver.di’ union, just weeks before Corona changed everything, a deal had been struck. It included an 11 percent raise for employees and a guarantee against layoffs for operational reasons. Corona changed the situation in retail. At the same time, the virus is an excellent excuse for basically anything, including layoffs.

Related article: Berlin: The Fight For and Against a New Department Store at ‘Hermannplatz’