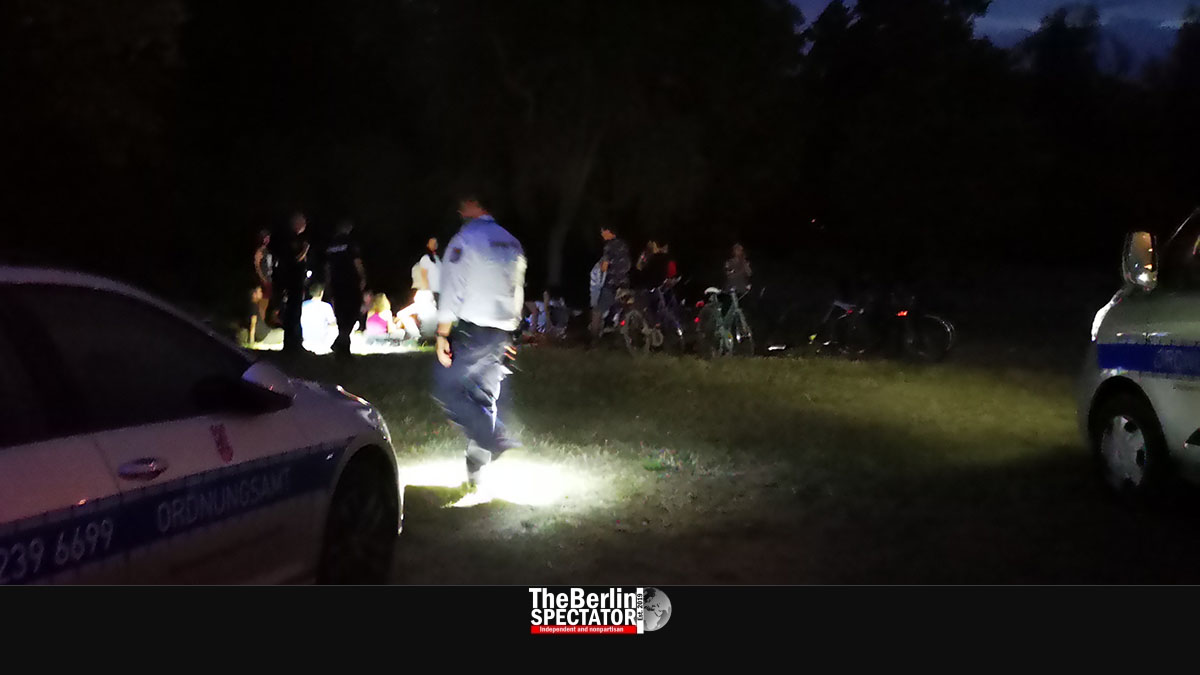 When the weekend ended a few hours ago, Berlin’s police must have felt relieved. The past three days were definitely not easy for them. Many policemen and policewomen were injured at protests.

Berliners already knew thousands of Corona deniers and Nazis were on the way to their city before the weekend commenced. But impressing the residents of the German capital with a protest is almost impossible. They have seen it all. Up to 5,000 rallies take place in Berlin every year.

For the Police Department, preparing for a total of eighty registered protests on Saturday was routine. Because of the big rally, it commissioned 1,500 policemen and policewomen to deal with it, to prevent it from escalating and to make sure the Corona rules would be followed.

The weekend had not even commenced, when a caller reported an attempted bank robbery at the ‘Karstadt’ department store at Hermannplatz in the early afternoon. At total of 200 officers were sent to the crime scene, including a heavily armed elite unit and psychologists who helped the bank employees because of the stressful experience they went through.

There once was a time when heroes weren’t zeros. It looks like that time has returned. One man, a security guard responsible for transporting cash, held on to his money bag. Four gangsters did not manage to grab it and fled without prey, but also without being stopped. At this stage, the police have video footage and descriptions, but no culprits.

Searching the department store, following leads, questioning witnesses, securing evidence, blocking streets and guarding the crime scene was a lot of work. It took hours. Now the robbery squad is investigating the crime.

No Masks or Distance

Because of all the action, Saturday came rather quickly. At 10:30 a.m., a growing crowd of thousands of protesters staged their rally against the government’s Corona rules. The participants were Corona deniers. Many Nazis joined them as well. None of the protesters wore masks, none of them kept the required distance.

That is why the protest was cut short. Police filed a criminal complaint against the organizers because they had failed to make sure the rules were adhered to. Later, the same crowd, which had grown to 17,000 people by then, went to a rally at the Victory Column. Again, Corona rules were not followed, and police ended the event.

Many of the Corona deniers and Nazis went to the Reichstag, where they continued their protest against the measures that protect them and the entire country from the Coronavirus. It just did not end. And there were 79 other protests police had to deal with.

That difficult day, Saturday, was far from over when the Corona deniers and their Nazi friends finally headed for restaurants, hotels and buses. In Berlin’s Neukölln district, yet another protest, this time against the imminent closure of a pub called ‘Syndikat’, commenced. It was a foregone conclusion that this one would turn violent.

Arrests at Yet Another Protest

Some of the 2,000 participants started throwing stones at police. They used forbidden pyrotechnics. At some point, trash cans were thrown on the street, parked vehicles were damaged. Police used pepper spray against violent left-wing radicals. Two police officers were injured in the process.

It was almost midnight on Saturday, when a group of up to 200 people started attacking police officers in the posh Prenzlauer Berg neighborhood. Again, stones were thrown and cars were damaged. Three persons were arrested.

After a day of this kind, there was something police did not need, namely another round of illegal parties in Berlin’s parks. At ‘Hasenheide’ park in Neukölln, dozens of police officers and officials from Berlin’s public order office prevented the usual big party from taking place yet again, by showing presence (see main photo at top of page).

They drove across all large pastures in the park, pointed flashlights at small groups of people who were drinking and smoking pot, and demonstrated resolve. As a result, there was no giant party at this park, for the first time in weeks.

Hardly anyone thanked the police for their hard work, except for Berlin’s Senator of the Interior, Andreas Geisel. He also commented on the Corona denier protests, by saying there was freedom of speech for everyone. “But whoever thinks they can come to Berlin and break existing rules, is mistaken.”

On Sunday night, the Berlin Police Department released numbers according to which 45 officers were injured at protests on Saturday. As many as 133 protesters and other persons were arrested and 125 legal proceedings were initiated.