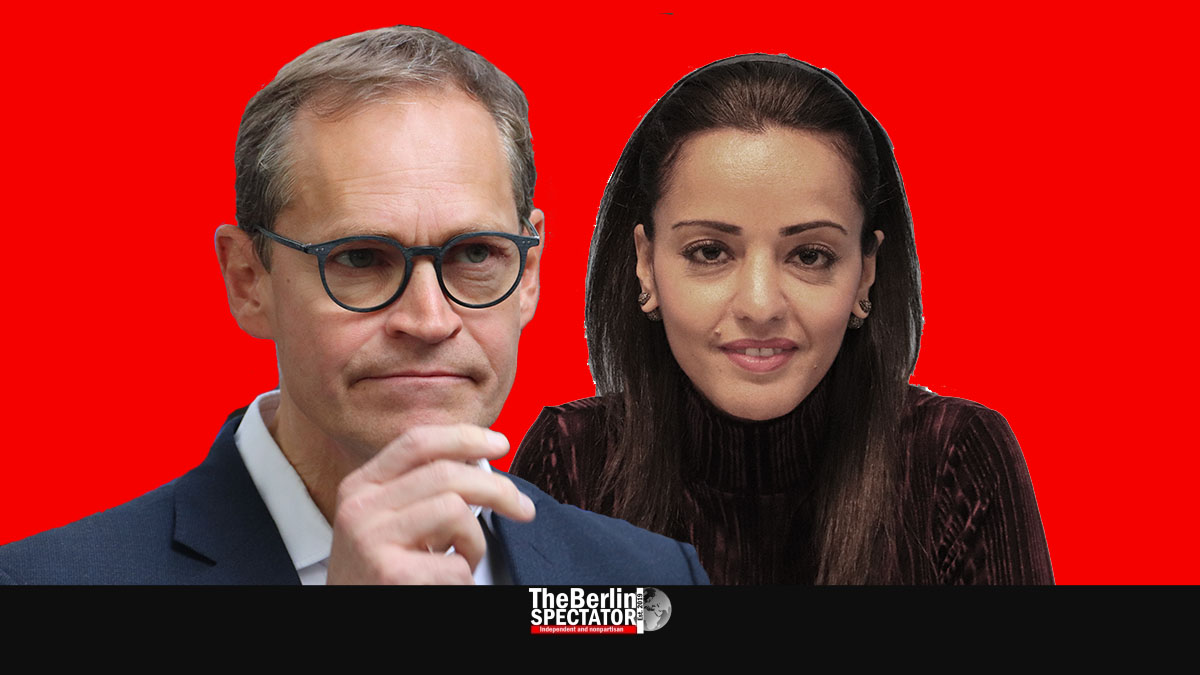 In Berlin, Sawsan Chebli, the city state’s State Secretary for Federal Affairs and Civic Participation, is putting Governing Mayor Müller in an awkward position. It is not the first time.

Sawsan Chebli is a Twitter star. She keeps on saying what she shares on social media is “private”, but because her official profession is State Secretary for Federal Affairs and Civic Participation, there are people, including inside Red City Hall and in the Berlin House of Representatives, who believe she might be exaggerating a little.

Situation at the House

At the House of Representatives, its members usually do not discuss Tweets, let alone those posted by State Secretaries. Also, people usually do not leave House sessions crying because someone did not like their Tweet. In Sawsan Chebli’s case, this is what happened in September of 2018. In the past years, she has angered people with those online statements of hers.

After neo-Nazis chased foreigners down the street in 2018, Chebli, a Social Democrat (SPD), posted a Tweet saying those who fought against right-wing extremism were not radical enough. She got into a lot of trouble for that one, because of the wording, which may have been insensitive considering the kind of position she holds. But, in this case, she actually may have been right.

But the main problem are posts related to the Middle East. Mrs. Chebli is a German citizen of Arabic origin. She claims to be fighting antisemitism among other forms of hatred. This kind of approach is not popular among many Arabs. Therefore, she receives threats and insults on a regular basis, also from Nazis. Chebli keeps on suing the authors of the worst ones.

But there is a contradiction. Usually, persons who claim to be fighting “ALL kinds of antisemitism”, including the Israel-related kind, do not have a personal problem with the tiny and only predominantly Jewish state on the planet. Chebli does. At least this is what some of her “private” Tweets sound like.

In January of 2020, another Tweet of hers backfired. In this case, she clearly crossed the line. A day after the 75th anniversary of the liberation of Auschwitz was observed at the former Nazi death camp, Sawsan Chebly felt the inner urge to post an antisemitic statement as a quote. This was what she tweeted:

„Sure, what happened back then is sad. But when it comes to the return of hatred, the Jews are not entirely innocent. Just look at the settlement policy, the annexation …” I hear this very often, not from Muslims, Arabs or refugees, but from Germans without addendum.

The conservative opposition at the House of Representatives slammed that Tweet of hers. So did activists who actually fight all kinds of this kind of hatred. Even if the timing for that Tweet would have been ‘better’ it would have been scandalous. Besides, the “sad” thing “happened” decades before any settlements or any Jewish state existed.

Blaming Jews for antisemitism is not exactly a new idea. Not even the original Nazis were the first to do so. But packaging outrageous Nazi content into a quote and spreading it is new indeed, especially when the author of the Tweet says she fights antisemitism. Something was — or is — very wrong here.

According to ‘Die Zeit’, other social media posts of hers have angered people inside Red City Hall, including Governing Mayor Michael Müller. In January of 2019, the publication reported that documentaries about her, or personality interviews on TV, which she seems to love just as much as “private” Tweets, would not be approved by her superiors anymore.

Now there is trouble again, from the perspective of some. Sawsan Chebli is exercising her right to become a candidate for the Berlin Bundestag. Of course her opponents regard the move as a problem. But the real issue is that she wants the same electoral district Governing Mayor Michael Müller picked, namely Charlottenburg-Wilmersdorf.

Müller seems to be drawing the short straw all the time. First he was semi-ousted, when his designated successor suddenly came to a party meeting he attended. Then, when he said he wanted to become a candidate for the Bundestag, he was basically pushed away from his electoral district Tempelhof, where he actually lives, by yet another SPD colleague. And now it is Chebli he is facing.

German-language media quoted her saying she was looking forward to “an open and fair competition for the nomination”. For a long time, she managed to be in the center of the attention more than Müller, at least online. Corona changed this aspect to some extent. What all of this means for the situation in Charlottenburg remains to be seen.

In her party, it was not a sense of entitlement that tipped the scales, Chebli stated this week, but rather commitment and conviction. As opposed to her antisemitism ‘quote’, it is relatively easy to interpret this statement of hers.

For Michael Müller, things are not easy at all. For a while, he was the most unpopular head of government in any federal state, according to polls, even though he worked hard and performed well almost the time. His left-wing coalition partners did not make things easy for him. Since the Corona crisis started, the Governing Mayor has gained popularity and respect. Now he will have to deal with another Chebli situation, one of a different kind.