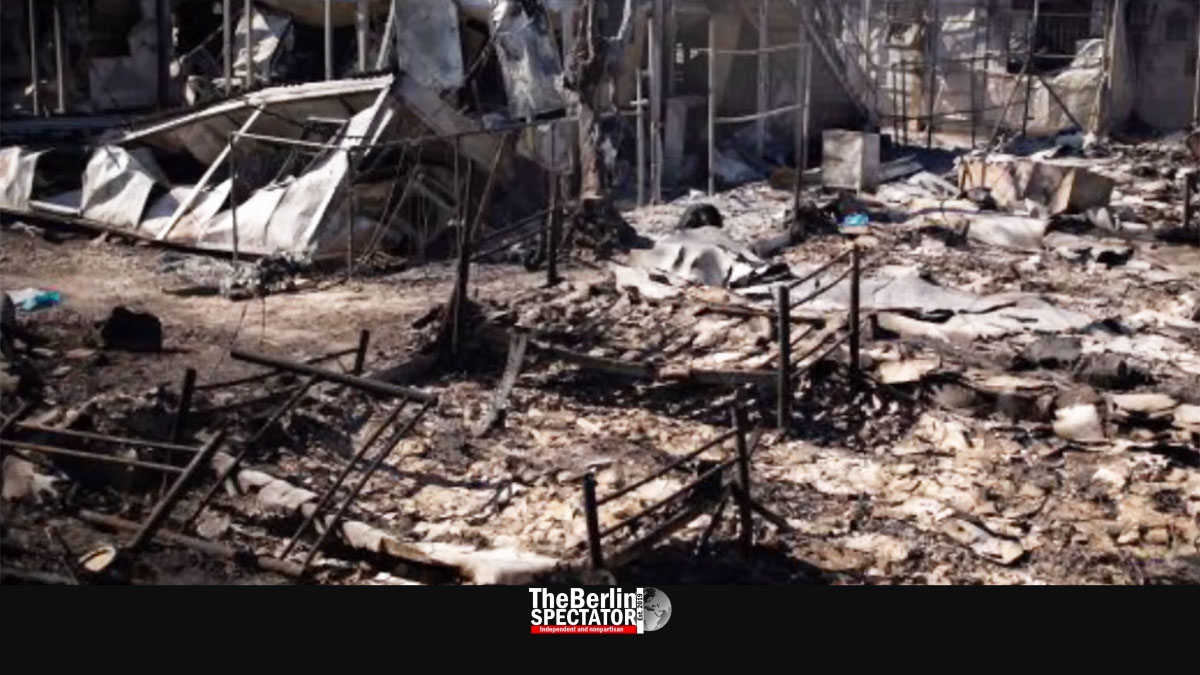 After the fires at the enormous Moria refugee camp on the Greek island of Lesbos, thousands of protesters in Germany called on their government to accept and accommodate all asylum seekers from there.

Three thousand people in Berlin, and more elsewhere, gathered for spontaneous protests on Wednesday night. They want Germany to accept all refugees affected by the fires that destroyed Moria camp in Lesbos. For the German NGO ‘Seebrücke’ (‘Sea Bridge’), that organized the rallies, a spokeslady said the refugees needed to be brought to Germany immediately. She argued a European solution was not in sight. Therefore individual states had to act.

After a second large fire destroyed more parts of Moria camp last night, the situation deteriorated further. Several German politicians demanded quick action. In Berlin, a government spokesman stated Germany had offered Greece any help it needed. “Our priority is to provide help on site, depending on what the Greece needs.”

Usually, it is mainly politicians from the center-left spectrum who call for accepting refugees in Germany. In this case, also because of the urgency, they have conservative backers, including Development Aid Minister Gerd Müller, a member of the Bavarian CSU. In an interview with the ARD TV and radio network, he said Germany should go first and accept 2,000 refugees from Lesbos as a “sign of humaneness”. Müller believes other E.U. countries would follow.

For the center-left SPD, Finance Minister and Vice Chancellor Olaf Scholz demanded a European solution. Both Germany and Europe needed to help, he said. His party colleague Foreign Minister Heiko Maas called for an allocation of refugees among E.U. countries who are ready to take them in.

North Rhine-Westphalias First Minister Armin Laschet warned against any German solo action. Taking all affected refugees to Germany was not a solution, he said, because that way the problem would soon reappear. But Laschet conceded that humanitarian help needed to provided quickly.

Minister Gerd Müller said what had happened in Lesbos needed to be a wake-up call for the European Union. For years, the situation there had been unbearable. Nothing had happened, in spite of the fact that the latest events had been foreseeable. Now it was time to act quickly.

E.U. to Pay for Relocation

For the Greens, their chairlady Annalena Baerbock said Europe could not turn a blind eye on the situation in Lesbos. “Germany needs to act”, she stated. Baerbock accused the federal government of thwarting necessary aid wherever it could.

The E.U. Commission has said it would pay for a relocation of the 400 unaccompanied adolescents among the asylum seekers to mainland Greece. But, so far, no E.U. country has offered to take in refugees who used to be accommodated at Moria camp until it burned down.