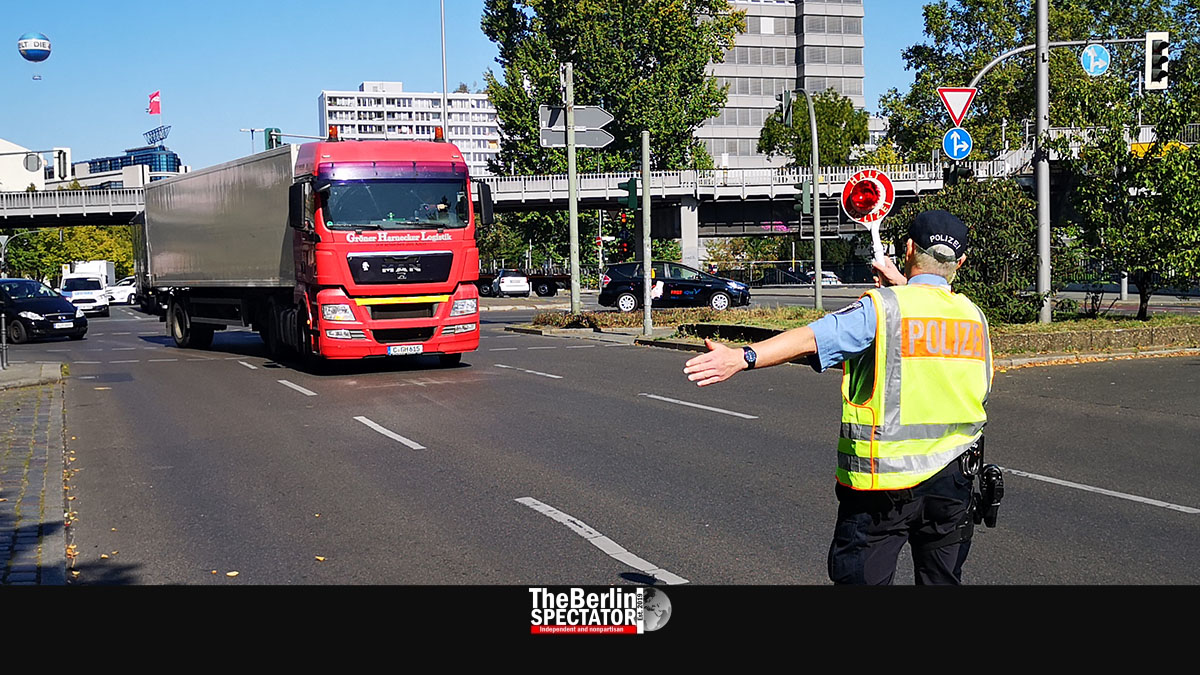 In Berlin, the traffic death toll is high this year. That is one reason why the police are working on disciplinary action against motorists and cyclists who endanger others or themselves. Today, they were busy at a large intersection in the German capital.

In 2019, 40 people died on the streets of Berlin as a result of traffic accidents. This year, things look worse, in spite of the fact that the semi-lockdown decreased traffic substantially in late March, April and May. The death toll is already as high as it was last year, but it is only September.

Many of the victims are cyclists. In several cases, they lost their lives in ‘right turn truck accidents’. The circumstances of those accidents are almost always the same: A truck driver intends to make a right turn, but cannot see cyclist who is approaching in the blind spot of the right rear view mirror. They take the turn and knock down the cyclist who dies under the truck.

“We tell people to waive their right of way”, Officer Jan Kuttritz of the Berlin Police Department told The Berlin Spectator on Monday, during a traffic check operation at the intersection of ‘Mehringdamm’ and ‘Tempelhofer Ufer’. Here, policemen stopped anyone who endangered cyclists or could have done so with their behavior, including cyclists themselves.

In about 50 percent of all accidents involving bicycles, the cyclists are to blame. The other half is being caused by motorists. What deadly bicycle accidents are concerned, there is not much the police can do to prevent them, apart from continuing to raise awareness and fining people who are responsible for violations. It is all about getting the overall number of accidents down.

Whether a cyclist dies in an accident depends on so many factors, including the angle at which he or she might hit the door of a truck on the side of the road that was opened at the wrong moment, or the age and health of the accident victim. Younger cyclists have better chances to survive in some cases. Of course, every single victim is one too many.

Some motorists, including drivers of huge trucks, were fined at Mehringdamm earlier today, during the traffic spot check. In other cases, officers just talked to them to raise awareness. In Berlin, taking turns without checking for cyclists and pedestrians conscientiously is a traffic violation. But, offense or not, the weakest traffic participants need to be protected. That is why prevention work has a high priority too.

Within two hours, some 40 trucks and 12 cars were stopped at the south-western corner of the intersection. The same applied to several cyclists who were either moving in the wrong direction, meaning they should have been on the bike lane across the street, running a red light or wearing headphones. People on bicycles are supposed to be able to hear the traffic around them.

Today’s traffic check action took place at a spot residents complain about. Over time, the Berlin Police Department is working itself through the top ten difficult intersections. That way, they do not only raise awareness at dangerous locations, but they also build trust. Berliners notice the police are taking action at spots they complain about. That way they know they are being heard.