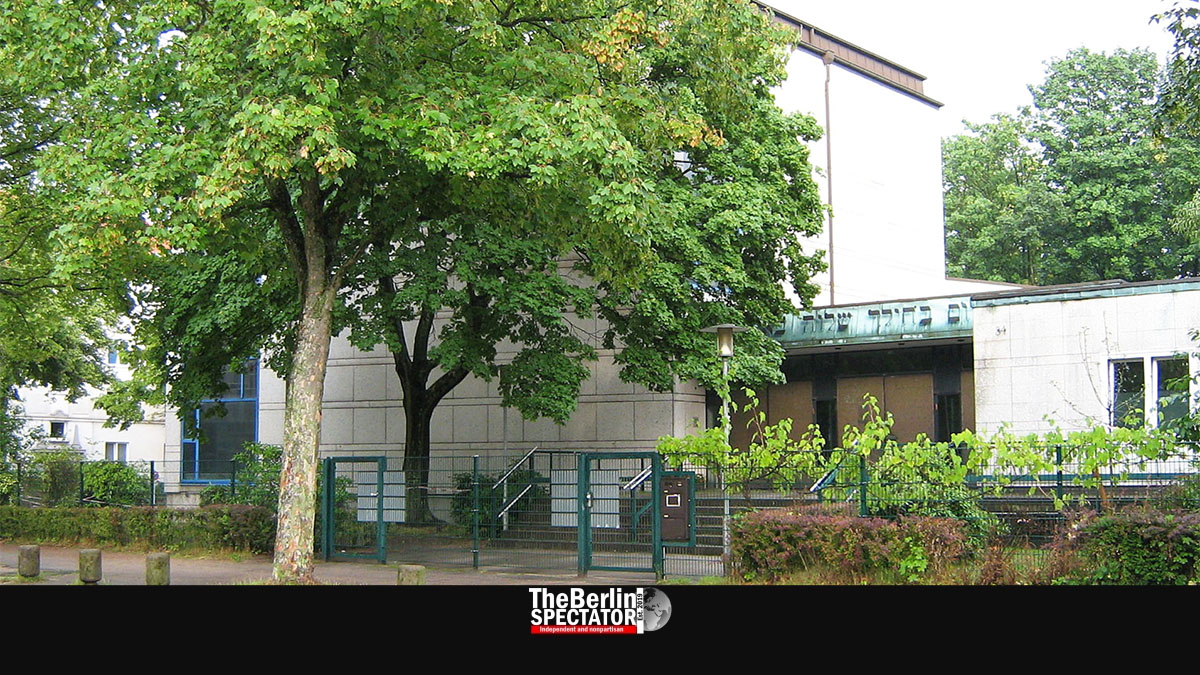 In Hamburg, a young man was gravely injured during an attack in front of a synagogue on Sunday. The antisemitic assault was condemned in Germany and abroad.

Berlin, October 5th, 2020 (The Berlin Spectator) — A few days ahead of the first anniversary of the murders at the Synagogue of Halle, a member of a Jewish congregation in Hamburg was injured badly right in front of his temple. During a celebration that marked Sukkot, a Jewish holiday, the 26-year-olf victim was attacked with a spade.

The culprit, a 29-year-old man was arrested by guards who handed him over to the Hamburg Police. He reportedly wore camouflage and had a piece of paper with Nazi symbols in his pocket. The assailant is of Kazakh-German origin and lives in Berlin, according to German-language media.

After the incident, the victim was taken to a hospital in an ambulance. The other participants of the Sukkot celebration were taken to safety. After the attack, the Hohe Weide Synagogue was cordoned off. A crime scene unit was on site. According to the Hamburg Police Department, the attacker seemed to be “extremely confused”.

While the exact motive has not been established and questions about the culpability have not been answered so far, the attack was definitely antisemitic. The Orthodox Conference of Rabbis in Germany called the assault “another shock for the Jewish community in Germany”.

Felix Klein, the German government’s coordinator against antisemitism, told the ‘Bild’ daily, it was shocking that there had been another attack on a Jewish congregation. As opposed to the Halle case, police seemed to have taken the right steps. Klein said he expected “a complete clarification of the assailant’s background and motive.”

The President of the World Jewish Congress (WJC), Ronald Lauder, reacted by saying a year after the Yom Kippur attack in Halle, “I am saddened to learn that once again, this time on the Jewish holiday of Sukkot, a German Jewish community is confronting a violent, antisemitic act of terror.”

Lauder criticized the security situation in front of the Hohe Weide Synagogue: “While, thankfully, police on the scene acted quickly to stop the attacker from committing further violence, the security presence was not enough to deter this attacker from gravely injuring someone.”

“We must ask ourselves, and German local and national authorities must address the question – why does this keep happening? Why is antisemitism thriving, and why does anyone believe there is room for such hate?”, Lauder stated.

“Our young people must not learn from those who hate. The German government must take responsibility in strengthening education so that the next generation understands that hatred of any kind is never permissible. The long-term viability of Jewish life in Germany depends on it.”

On Monday morning, the Central Council of Jews in Germany released a statement. “Our thoughts are with the injured student”, it said. “We wish him a speedy and complete recovery.” An attack of this kind, on a Jewish holiday, can only be antisemitic.

The Council’s President Josef Schuster said the fact that Jews in Germany became the target of hate was something nobody could register with indifference. Schuster thanked the Hamburg Police for stepping in and said the incident was a reason to look into the security measures at the Hohe Weide Synagogue.

In addition, he demanded a coordinator against antisemitism for Hamburg. Several federal states and Germany’s government in Berlin already have coordinators of this kind. “We expect the entire society to counter antisemitism”, Schuster stated, “in order to make sure Jewish life in Germany is possible unrestrictedly.”

On Friday, October 9th, 2020, Germany’s President Frank-Walter Steinmeier will take part in an event that commemorates the victims of the Halle attack that took place a year earlier.