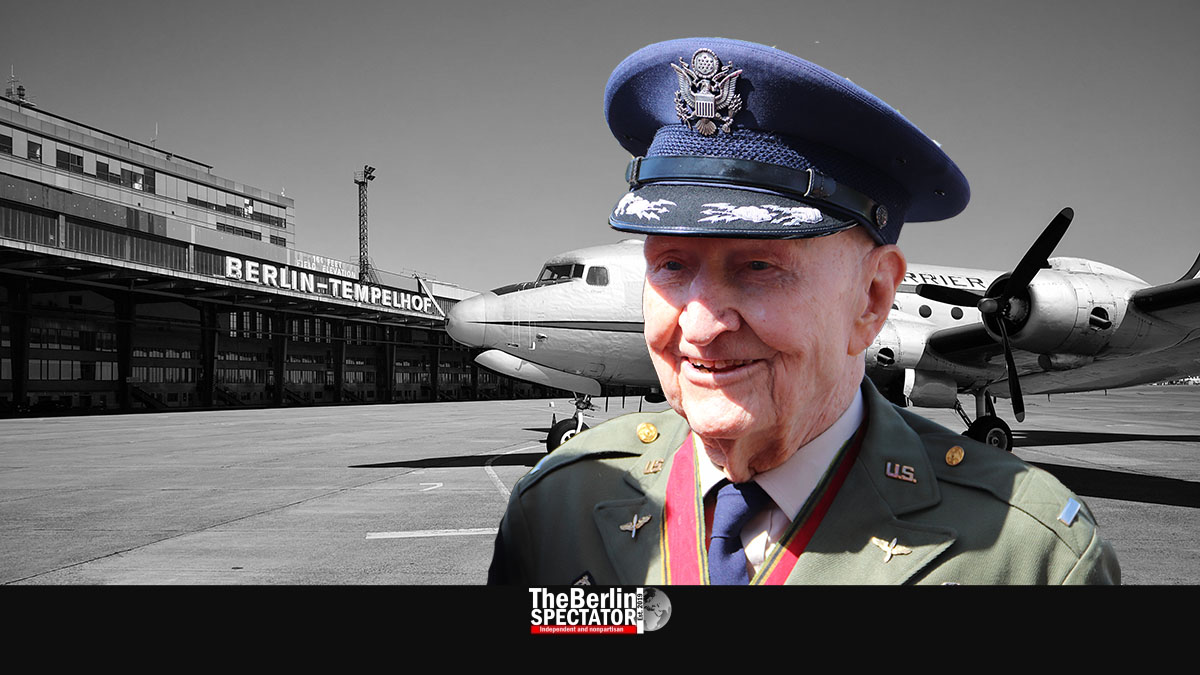 Berlin has a best friend in the United States of America. Gail Halvorsen is turning 100 today. The city he helped so much congratulated him with a video clip.

Berlin, October 10th, 2020 (The Berlin Spectator) — On October 10th, 1920, Gail Seymour Halvorsen was born in Salt Lake City. At that point, nobody knew that ‘Hal’ would be closely connected to Berlin one day. He was one of those who saved the residents of the Berlin’s western sectors in 1948 and 1949 as a ‘Raisin Bomber’ pilot.

On March 25th, 1948, the Soviets restricted ground traffic to the American, British and French sectors in Berlin. In June of that year, Moscow imposed a blockade that could have starved hundreds of thousands of people. But the Americans and other Allies organized the biggest airlift of all time, which is known as the Berlin Airlift.

Colonel Gail Halvorsen was 28 years old when the Berlin Blockade and the Airlift commenced. As one of the pilots who made sure the people in Berlin’s western sectors would not starve, by flying in food and other items they needed, he noticed many children who were waving at him every time he flew in and out during daytime.

At some point, Halvorsen started dropping chewing gum and sweets for them, tied to little parachutes. He initiated ‘Operation Little Vittles’ for that purpose. From that moment forward, the children in Berlin called those aircraft ‘Rosinenbomber’ (‘Raisin Bombers’). They came in every 30 to 90 seconds. So, there were lots of raisins and other sweets to get hold of.

The children who were waiting for Hal’s plane could not identify it, because they all looked the same. So he started wiggling his wings when he flew in. At some point, Halvorsen and his colleagues would bring 425 kilos (937 pounds) of sweets every day. The gum and sweets put smiles into the faces of kids who did not have anything, a few years after Nazi Germany was defeated by the Allies.

Seventy years after the times of the ‘Raisin Bombers’, on May 12th, 2019, retired Colonel Gail Halvorsen came to Berlin’s Tempelhof Airport again, for the millionth time. In this case, he took part in the Berlin Airlift 70th anniversary celebration, at age 98. Obviously, his age did not stop him from crossing the Atlantic Ocean yet again, as a passenger. Age is just a number. Right, Colonel?

It would have been the same this year, when the 71st anniversary of the end of the Berlin Blockade and the success of the Berlin Airlift were celebrated. But something called Corona was in the way. So, Gail Halvorsen wrote a letter “to Governing Mayor Müller and my dear friends in Berlin” in which he said that “our thoughts and the gratitude in our hearts know no boundaries.”

Father of the ‘Raisin Bombers’

Gail Halvorsen, who has been a holder of The Order of Merit of the Federal Republic of Germany since he left the U.S. Air Force in 1974, is celebrating a big birthday today, namely his 100th. Berlin congratulated him with a special birthday video clip (see video further up on this page). Governing Mayor Michael Müller said Gail Halvorsen and his colleagues had rendered outstanding services to the Berliners, to freedom and democracy.

“Halvorsen is the father of the ‘Raisin Bombers'”, Müller stated. “His little parachutes with sweets for the children of Berlin symbolized the humane face of a risky rescue operation for a ‘half city’ that lasted many months.” Müller said Gail Halvorsen was “likeable, open-minded and gracious.” He called him “a friend and ambassador of our city in the United States.”