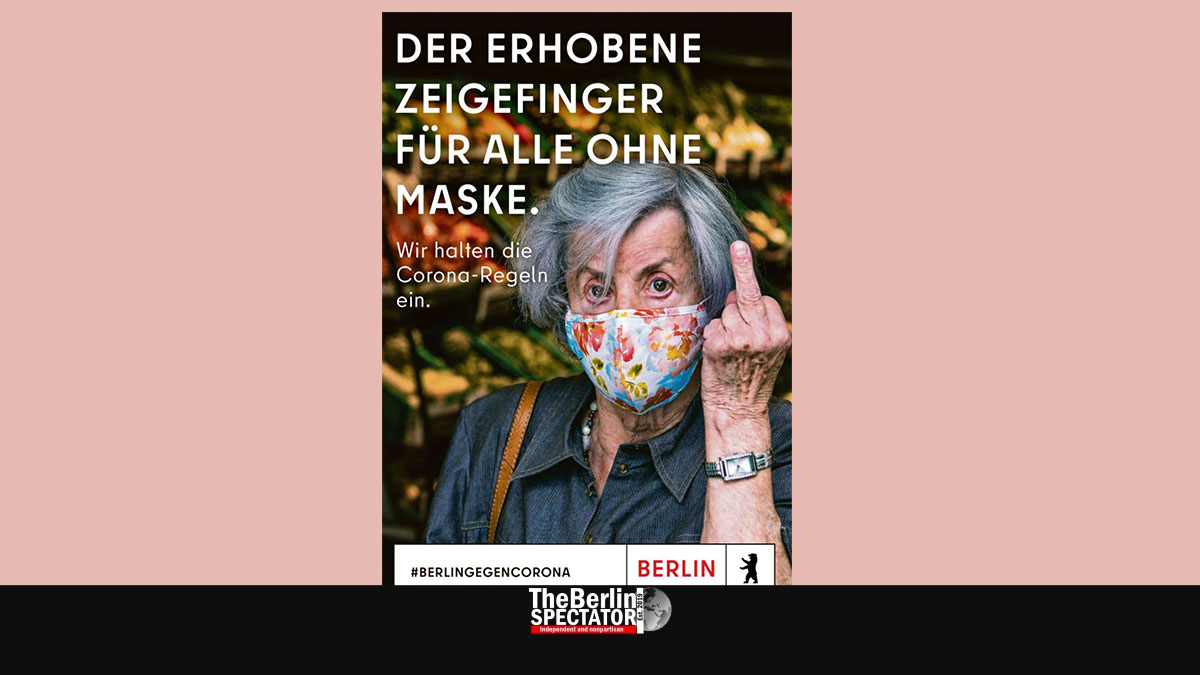 In times of exploding Corona numbers in Berlin, mask refuseniks are risking people’s health and lives. Why wouldn’t we be angry at those deniers? The finger Berlin is showing them in its new awareness campaign is the right one.

Berlin, October 14th, 2020 (The Berlin Spectator) — For months, politicians and virologists have told Berliners to put on their masks in shops and in public transport with a wagging finder, and rightly so. Now some commentators are complaining a lady in an ad Berlin placed in several newspapers on Tuesday, to raise awareness, was showing refuseniks the wrong finger. She is not. And all the fuss critics are making is artificial.

The Corona numbers are skyrocketing, Berlin’s hospitals are preparing for hard times by clearing out ICUs for Corona patients they are expecting. Several Berlin districts have Incidence Numbers that are exceeding everything the city has ever seen. The situation is dangerous. It is as simple as that.

Still, some residents refuse to put their masks on in public transport. Asked why they refrain from doing so, they say they will put them on once a conductor shows up, as if this was all about not getting caught. But it actually is about life and death.

There are enough restrained, unobtrusive awareness campaigns that tell people to follow the rules with nice little smileys. But, apparently, Berliners who have still not understood what is going on need a reminder they will remember. A reminder that is the talk of the city. A reminder of the kind Berlin’s agency ‘visitBerlin’ has created.

The awareness advertisement Berlin published shows an elderly lady wearing a protective mask, with leaves in the colors of fall behind her. She is showing the middle finger into the camera. The message she is conveying is is ‘f…. you’. “The wagging finger for everyone without mask”, the German text says. “We adhere to the Corona rules.” Of course, there is a good portion of satire in this ad.

Berlin is cheeky, bold and brazen: The old lady who is showing the middle finger looks exactly like a Berliner. Many of us use the f-word, especially in English, since it sounds less aggressive that way. Besides, this is 2020. Complaining about a gesticulation of this kind is a little narrowminded. Besides, the time for understanding towards mask refuseniks should have been over months ago. They deserve the message Berlin has brought across.

Martin Luthe, a member of Berlin’s House of Representatives who was kicked out of the liberal FDP the other day because of a long lasting personal argument with the party’s floor leader, is often right about things. In this case, he is not. Luthe filed an official complaint against the Senate because of Berlin’s new awareness campaign. He is not the only one who slammed the latter.

But he, and everyone else, would be better served if he told those refuseniks to put their masks on, instead of complaining about an unambiguous message that was brought across quite well. On the other hand, Luthe already helped spread the campaign more by filing the complaint and keeping this theater play going. Thanks.

But those who complained won after all. The awareness ad with the lady who shows the middle finger was just stopped, according to the ‘b.z.’ daily. The agency ‘visitBerlin’ even apologized. What for?