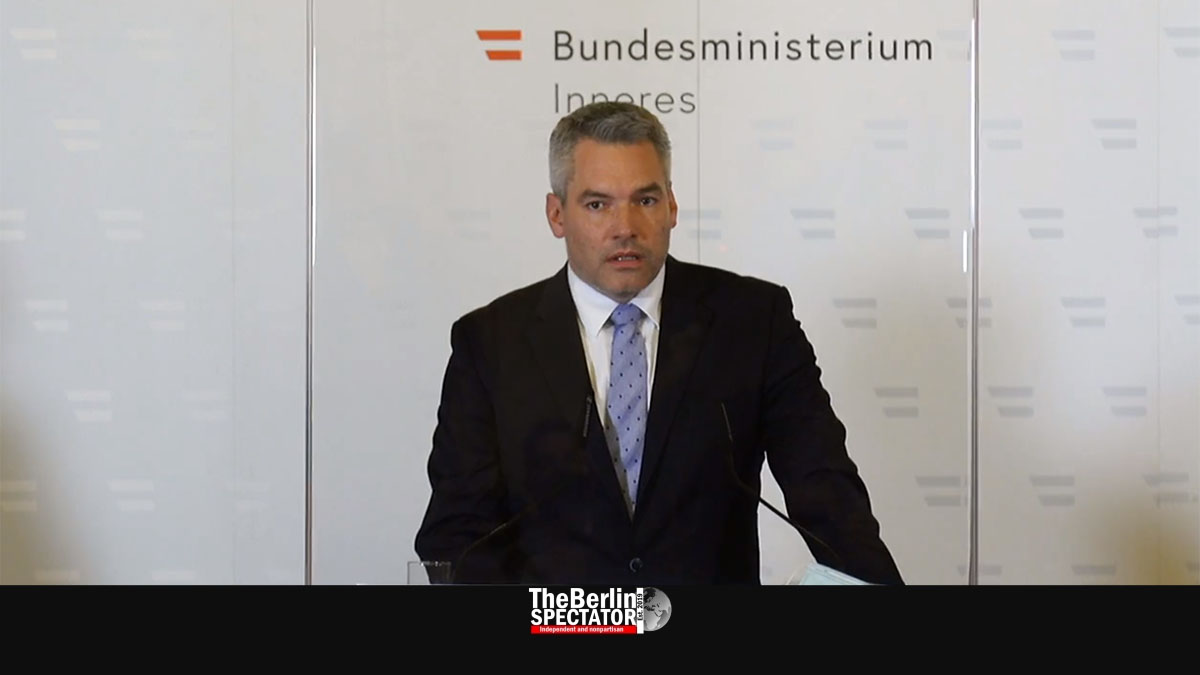 After a terror act in Vienna’s city center, Austria’s Interior Minister Karl Nehammer announced three people had been killed and many injured. That number increased to four shortly after. Residents were asked to stay at home on Tuesday.

Berlin, November 3rd, 2020 (The Berlin Spectator) — Four persons, two women and two men, were killed and 17 were injured by at least one Islamist terrorist in the center of Vienna on Monday evening, as Austria’s Interior Minister Karl Nehammer confirmed at an early morning press conference on Tuesday. He said this thoughts were with the victims and their next of kin. One officer was badly injured, the Minister confirmed.

According to Nehammer, the terrorist was a sympathizer of the so-called Islamic State. He was neutralized by the police. During the terror act, he wore a fake explosive belt and used an assault rifle. A thorough investigation is on its way.

Police Director Franz Ruf stated at the same press conference, the terrorist’s apartment had been blown open with explosives and searched thoroughly. Thirty-five investigators were in the process of analyzing video and photo material the police had received by residents and passers-by in Vienna.

“Austria has been a strong democracy for fore than 75 years”, Minister Nehammer said. It was a country the identity of which was shaped by values and basic rights such as freedom of speech, constitutionality and tolerance in its societal cohabiation.

The terror act was an attack on those values and “a completely ineffectual attempt to weaken our democratic society”. Austria would never put up with this, no matter whom it came from. There would be consequences, Nehammer vowed. He said an extensive investigation was on its way. A national mourning for the duration of three days was announced.

“Stay in your homes”, the Minister told the residents of Vienna. “Avoid the city center.” He said children did not need to go to school today. He also said the city would be guarded intensively. The Austrian Defense Ministry had provided special forces who would support the police by guarding objects.

“I am honored to head a Ministry like this one”, Nehammer said. The officers on duty had done an excellent job. Many police men who were on vacation had called and said they wanted to help.

‘No Place for Terrorism’

“There is no place for terrorism and violence in our society”, Interior Minister Nehammer stated. On Monday night, Chancellor Sebastian Kurz had condemned the “despicable terror attack.” He said in the Austrian society there could not be tolerance for intolerance. This was not a dispute between Christian and Muslims or between Austrians and migrants, but “a fight between the many people who believe in peace and those who want war.”

At this stage, the Austrian authorities do not seem to know whether there were more shooters or accomplices, apart from the terrorist who was killed by officers nine minutes before he started shooting at people. The attack began close to Schwedenplatz station. Several persons have reportedly been arrested by now. It is unclear whether they were accomplices or not.

France’s President Emmanuel Macron, whose country recently had to deal with Islamist terror attacks as well, reacted to the murders in Vienna by saying a friendly state had now been attacked. “Our enemies should know whom they are dealing with. We will not give in.”

Since October 16th, 2020, there have been three Islamist terror attacks in France in which four people were murdered. Two of the victims were beheaded. The attacks took place near Paris, in Nice and Lyon.

Germany’s Chancellor Angela Merkel stated, at this terrible time at which Vienna had become the target of terrorism, her thoughts were with the victims and the security people who were confronting the danger. The Germans stood with their Austrian friends. “The fight against Islamist terrorism is our common fight”, Merkel stated.

Germany’s Foreign Ministry reacted too. “Our thoughts are with the injured and the victims in this difficult time”, a statement read. “We should never give way to the hatred that is supposed to divide our society.