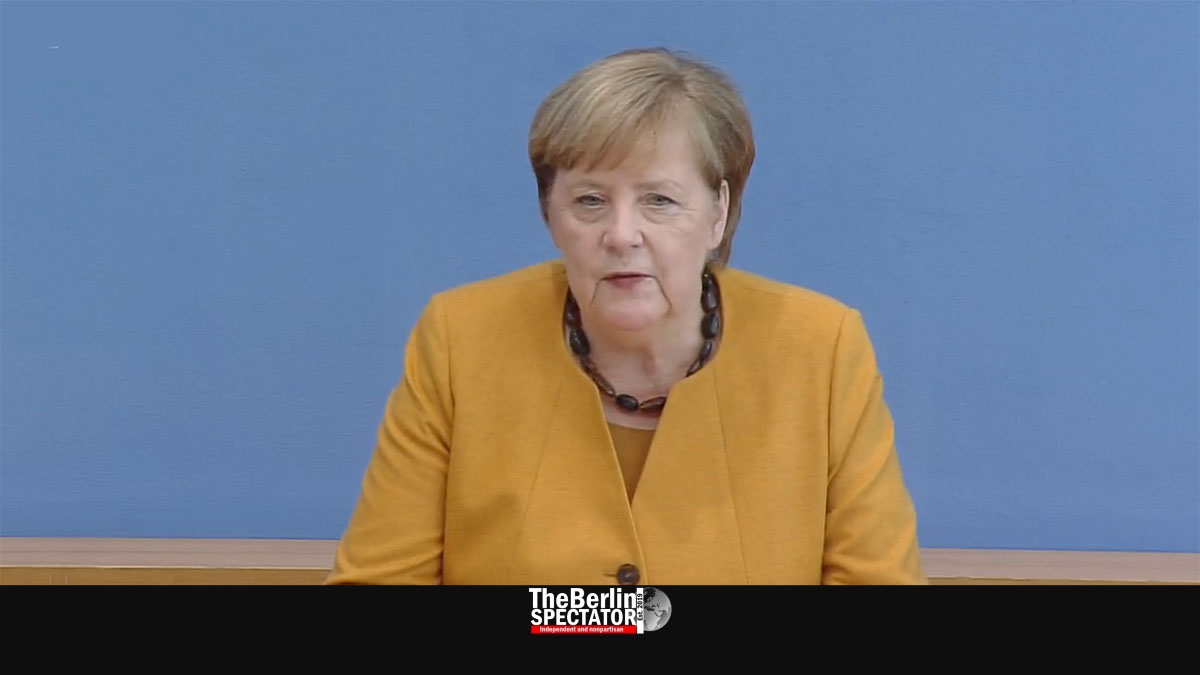 On the first day of the second Corona lockdown in Germany, Angela Merkel commented on the crisis again. She said her government was worried about the situation right now.

Berlin, November 2nd, 2020 (The Berlin Spectator) — The Chancellor of the Federal Republic of Germany said in Berlin, the restrictions that had been put in place today affected everyone. Most people understood why the measures were necessary, Angela Merkel stated. Still, it was important to her to explain again why the decision had needed to be taken.

This pandemic was a big challenge of a kind that arose once per century. Mrs. Merkel added she hoped that this would be the case in the future as well. The situation right now worried her government. Within 14 days, the number of new Corona infections had tripled. Since mid-October, it had quintupled.

The number of Corona patients who needed to be treated at hospitals had doubled within ten days. Mrs. Merkel, who is a scientist herself, one known for looking at data a lot, said the number of people who had been infected today would appear in the statistics later. At the same time, the health system was approaching its maximum load.

This was a situation no federal government could accept, Angela Merkel said. “Personally, I do not want to accept it either”, she told the press in the German capital. Overburdening the health system was not an option, the Chancellor stated.

There were newly infected persons who were walking around today without knowing, she said. In 75 percent of the cases, the sources of new infections could not be traced anymore. “This has to change”, Mrs. Merkel stressed. She explained that Germany had a Seven Day Incidence Number of 127.8 right now. That number needed to be decreased to 50, because at that level the health authorities could still trace infections back to the sources.

There was a direct correlation between the number of contacts and infections, Angela Merkel explained. She conceded that the measures that had been put in place to get the numbers down interceded in the private lives of people. In the next four weeks, everyone would need to sacrifice things they liked and that made life worth living.

Her government had not seen any option that would have been based on milder measures. “That is why we took those decisions”, the Chancellor said. The contact restrictions “could be the wave breaker.” According to Mrs. Merkel, the most important aspects are the health care infrastructure, making sure the economy is running and keeping schools and kindergartens open.

Angela Merkel also explained the rules alone would not improve anything. They would have to be followed as well. “If we manage to slow down the virus, we will have a chance for a bearable December”, she said. Of course the Corona rules would still apply then.

She also promised “quick and unbureaucratic support” for businesses in need and said the government’s Corona Warning App was a useful tool. It had been downloaded 21.5 million times so far and had transferred 2.57 million test results to date. But only 60 percent of users who had tested positive had shared their result with their contacts anonymously.

According to the Chancellor, some things have improved since the first lockdown in spring. She said quick Corona tests, more protection material and improved medication were available now. Also there was a positive outlook on vaccines that could be approved soon.

When asked why the second partial lockdown had commenced today, instead of a few days earlier, she said an assessment had been made. The government had known that some people would “visit institutions” before they would close. On the other hand, state parliaments and organizations had still needed a few days time to take decisions and organize things. Mrs. Merkel refused to speculate on what might happen after this lockdown, in late November.