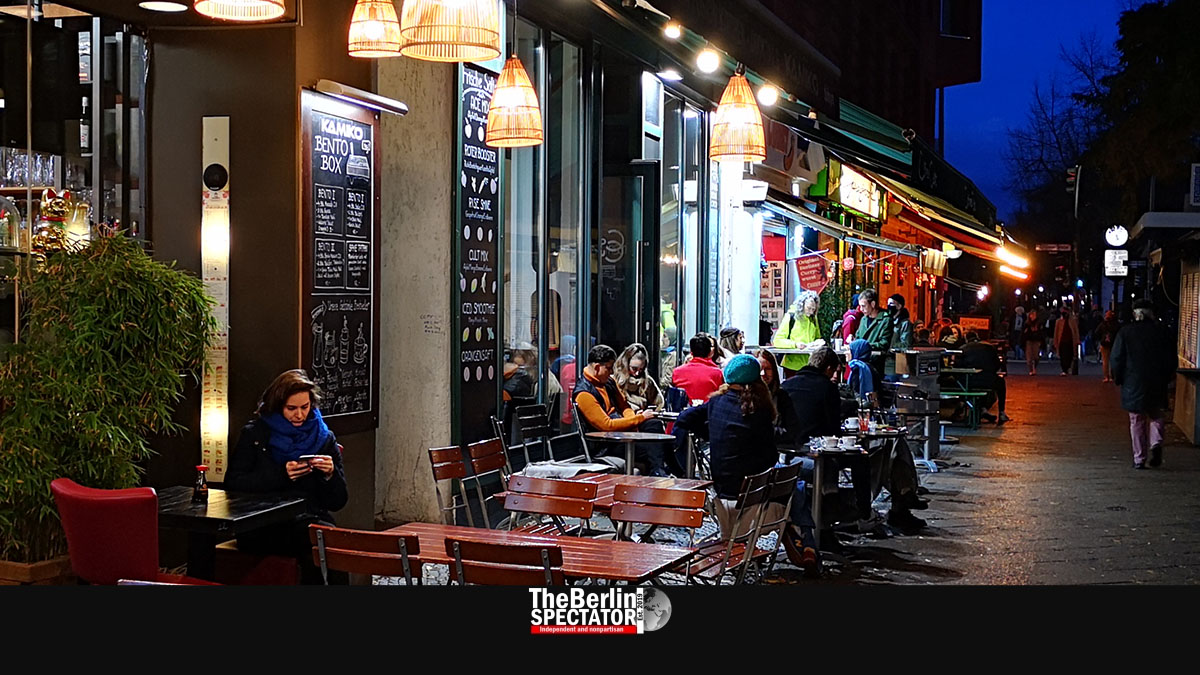 Just hours before the new partial Corona lockdown commenced, many Berliners seemed to feel the inner urge to be active and enjoy their ‘last weekend’ to the fullest. Some residents consumed nice meals in restaurants, as long as they could.

Berlin, November 2nd, 2020 (The Berlin Spectator) — Most Berliners know the new, strict anti-Corona measures are necessary to bring down the number of infections. At the same time, nobody really feels like going through another four-week semi-lockdown. Just hours before the latter kicked in this morning, many restaurants were sort of crowded.

At a Sushi place on Bergmannstrasse in Berlin’s Kreuzberg borough, people ordered Sashimi and other delicious items. A few steps down the street, they consumed Vietnamese treats as if there were no tomorrow. At pubs, they poured beer down their throats and seemed to be feeling like normal people in normal times, at least for a moment.

Other Berliners took to the streets. Some two miles further east, and 24 hours earlier, on Saturday, some 1,000 people staged a protest against the new abortion law in Poland. They wanted to show solidarity with the tens of thousands women in this neighboring country who have been at rallies in Warsaw and other cities for days, fighting for their rights.

Another mile further east, in the German capital’s Neukölln district, mostly Turkish and Arab Berliners walked up and down Sonnenallee, a major street known for its countless Döner Kebab and Shawarma places, Shisha bars as well as supermarkets that offer Middle Eastern food of all kinds. Especially the restaurants were crowded, for the last time until December.

Lots of families came to this location because they knew it was their last chance to have a pre-Christmas atmosphere around them for quite a while. Children raced down a giant slide while their parents recorded every moment using their Chinese-made cell phones. This kind of quality time in the city just came to a sudden halt, because of the lockdown.

The owner of one of the stalls, a gentleman from Nuremberg with a thick Franconian accent who was busy making ‘Quarkbällchen’, which are tiny, sweet and fried little dough balls, told The Berlin Spectator all stalls needed to be closed in November, in spite of the fact that selling takeout food was legal. He said the issue was that Christmas markets or similar events attracted many people. Indeed, gatherings are exactly what the German government and the Berlin Senate want to avoid.

So far, he had not received any money from the state, the stall owner said. But he had been hoping to make some money right there, at Potsdamer Platz. Due to Corona and countless cancelled events, he had hardly earned anything this year, he complained. All businesses at ‘Winter World’ will just close down for the rest of the month, but those locked stalls will remain on site. Their owners are hoping to back in business in December. The same applies to the family that owns the giant slide. But there is no guarantee they will be allowed to reopen on December 1st.

In Kreuzberg, there was a long line at the ‘Boiler Sauna’ which is mainly frequented by gay men. But a few women were waiting there as well. Absolutely everyone wanted to go because, again, it was the last opportunity to sweat off some calories.

Right there, at the intersection of Mehringdamm and Gneisenaustrasse, the owner of a Pizza parlor, a beautiful young lady with a bright smile, said her business would remain open throughout the semi-lockdown. She was only required to remove her tables from the sidewalk to make sure nobody would sit there. Offering or purchasing takeout food is allowed, while sitting down at any restaurant, café, pub or similar place is forbidden until this month is over.

This past weekend, there were a few Berliners, including Governing Mayor Michael Müller, who engaged in an activity called ‘inaugurating a sexy new airport’. It actually happened, down there in Schönefeld, with a delay of almost nine years.

Berlin, and all of Germany, will be rather somber places, again, for a month. At least there is a chance for a nice Advent season after the second lockdown, as Michael Müller put it yesterday. On the other hand, there is no guarantee. If the infection numbers do not decrease, Christmas and Hanukkah might be rather dull as well.