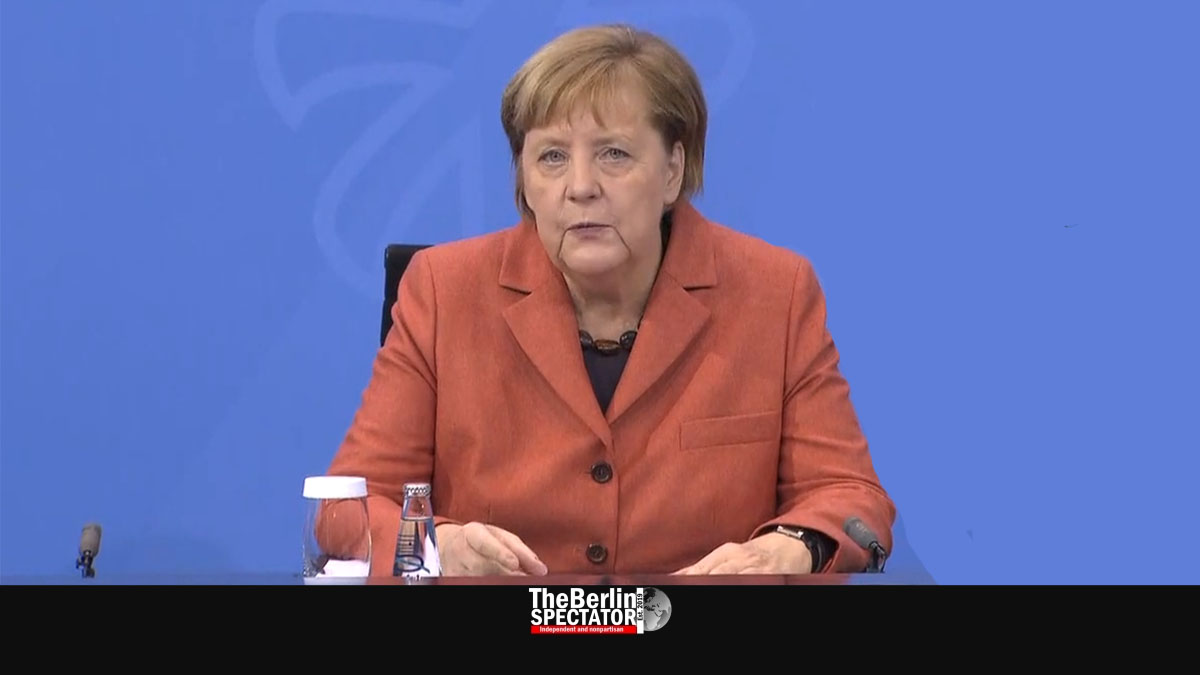 Chancellor Angela Merkel and the First Ministers have imposed a strict lockdown on Germany. It took them an hour to decide.

Berlin, December 13th, 2020 (The Berlin Spectator) — This time, the Corona conference with Angela Merkel and the First Ministers did not take too long since they had already been engaged in intensive communication in the past days. Because the Corona infection numbers skyrocketed again, all First Ministers agreed to a hard lockdown. They decided to decrease contacts wherever possible.

At a press conference in Berlin, Angela Merkel said many people were dying of Corona, and Germany’s health system was under pressure. The task had been to prevent this kind of situation. For that reason there had been an urgent need for action. The Chancellor reiterated her government’s goal to decrease Germany’s Seven Day Incidence Number to 50 or below. At this stage, it stands at 169.1.

The strict lockdown will be put in place this Wednesday, December 16th, 2020. It is supposed to last until January 10th, 2021, or until further notice. According to Angela Merkel, it is impossible to say how Germany will proceed in January, at this moment. “It will take as long as it will take”, Bavaria’s First Minister Markus Söder said.

The contact restrictions will remain the way they have been, meaning up to five persons from up to two households may gather. From December 24th to 26th, 2020, the rules temporarily change. During that time period, members of one household may gather with up to four additional family members, including life partners or siblings. There will not be exceptions for New Year’s Eve. The sale of pyrotechnical products is now forbidden. So is consuming alcohol in public.

Almost all retail businesses have to close on Wednesday, December 16th, 2020, and they are supposed to remain closed until January 10th, 2021. The same applies to hairdressers, beauty parlors and similar businesses. Food stores, pharmacies and drug stores remain open.

Schools are supposed to close from Wednesday as well. Distance learning may be continued. The federal states will decide what kind of rules to put in place for graduating classes. Mrs. Merkel said children should be cared for at home wherever possible.

Employers are being asked to let employees work from home. Restaurants may offer takeout food only. What churches, mosques, synagogues and other temples are concerned, the Interior Ministry will talk to all large religious organizations in order to establish how to proceed without exposing people to the Coronavirus. The quarantine rules which have been in place for a while now are not being changed, and the German government does not recommend domestic or international trips.

Berlin’s Governing Mayor Michael Müller, who is also chairman of the German Conference of First Ministers, said it was clear that the new measures were incisive. But there had not been any alternative. “We acted quickly”, Müller stated. According to him, it was easy to reach a consensus.

Markus Söder conceded the situation in Germany had gotten out of control. “Corona is a catastrophe which affects us more than anything we have experienced before”, he told the press in Berlin. The “lockdown light” had had an effect, but the “medicine” had not been strong enough.

“Every three minutes, someone dies of Corona”, Markus Söder stated. Germany’s clinics were under pressure. In some cases, doctors were forced to decide which patients they could help, and which they could not treat. “Bergamo is closer than some people think”, Söder said, referring to the terrible situation in the Italian city during the first Corona wave.