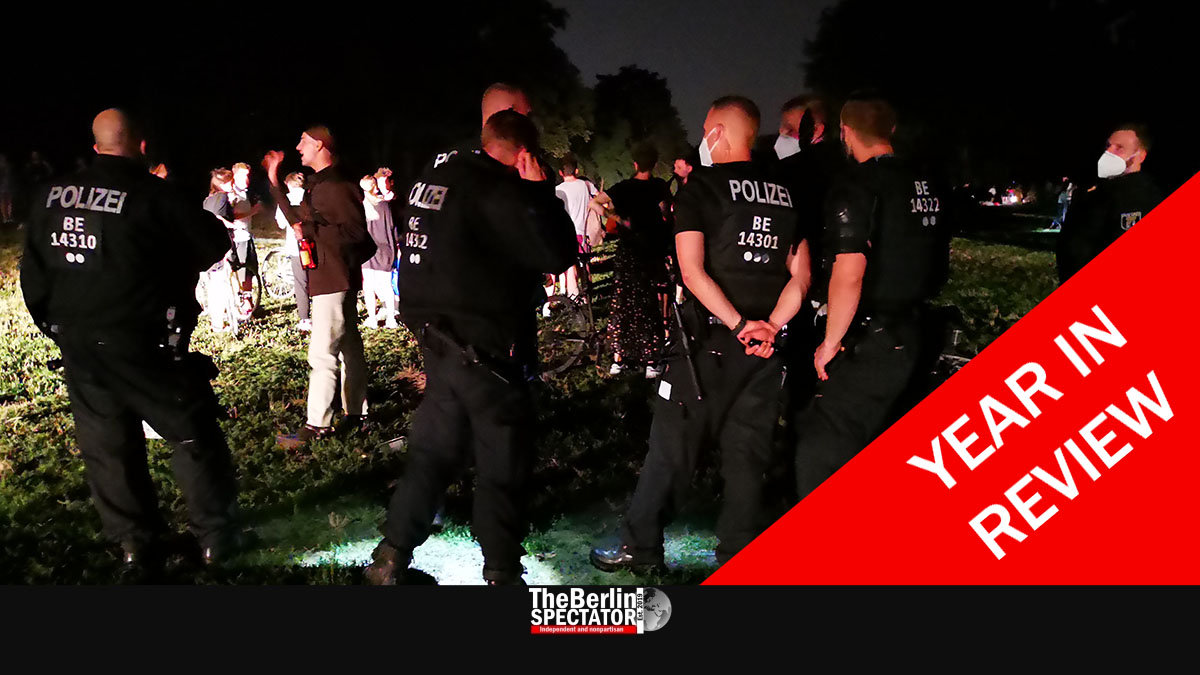 Corona dominated Germany and the world. But there were other news as well. Some were not Corona-related at all.

Berlin, December 27th, 2020, update 2:00 p.m. (The Berlin Spectator) — Berlin’s Housing and City Development Senator Katrin Lompscher stepped down on August 5th, 2020. She had failed to return payments she received for directorship posts. Senators in the city state of Berlin receive 5-digit salaries and a remuneration for those posts at state-owned companies. Those payments they automatically receive have to be returned to the state. Mrs. Lompscher failed to do so for three years, due to an “accounting mistake”.

Sure, there were big protests staged by Corona deniers in August, but those are covered in our ‘Chronology 2020: Germany and the Corona Pandemic‘. A bank robbery took place in Berlin. At Bundesplatz square, a guard was shot and injured only five days after another robbery attempt was reported at a bank at Hermannplatz square.

Berlin’s Senate Administration and the Police Department introduced a plan designed to combat extremist tendencies internally. The city’s New Synagogue, part of which survived the Nazi times and the bombs in 1945, celebrated the 25th anniversary of its reopening. In 1988, the communist GDR had started reconstructing the temple. The endeavor continued in reunited Germany.

After the blast Beirut, in which 204 persons were killed, including one German diplomat, and more than 6,000 were injured, Germany sent an emergency relief crew. On August 8th, 42 helpers from the German Federal Agency for Technical Relief (THW) arrived in Beirut and started searching for survivors.

In August, police kept on stopping parties in Berlin’s ‘Hasenheide’ and other parks. The city’s clubs were closed since March because of Corona. The danger of infection was simply too big. But party people at those parks did not care what anyone said. Rather than protecting themselves and others, they would party hard until the police showed up.

In early August, Germany was hit by a heatwave. Because of Corona, international travel was limited. So was the number of people who were allowed to hit Germany’s Baltic Sea beaches. They were supposed to keep their distance to others. Many travelers had to be turned back because the capacities could not be exceeded. A website showed beach enthusiasts which beaches were full.

In Berlin’s Neukölln district, left-wing protesters tried to prevent a pub called ‘Syndikat’ from being evicted. Some participants were violent. They were outnumbered by police.

In the meantime, Finance Minister and Vice Chancellor Olaf Scholz became the Social Democratic Party’s (SPD) candidate for Chancellor. The nomination was not a surprise at all since Scholz is the most popular politician the SPD has. His problem is the fact that his biggest opponent is his own party. But he has an advantage too: Angela Merkel, who had pulled her conservative Christian-Democratic Union (CDU) towards the left, is leaving politics in fall. Her successor is likely to reverse that course. This aspect could give the SPD more support, which it badly needs.

On August 20th, Mrs. Merkel met Greta Thunberg and other young climate activists. Brandenburg’s and Berlin’s new BER Airport tested itself with thousands of volunteers, two months ahead of its opening. On August 22nd, Putin critic Alexey Navalny arrived in Berlin, where he was treated after being poisoned with the Russian nerve agent Novichok in Russia.

Germany’s ‘Warning Day’, during which the country tested its disaster warning systems, failed due to a major software glitch. During a protest staged by Corona deniers and Nazis in Berlin om August 30th, some participants managed to break through a barrier and enter the stairs to the Reichstag’s entrance. As many as 300 persons were arrested during this protest, for attacking the police and other violations.