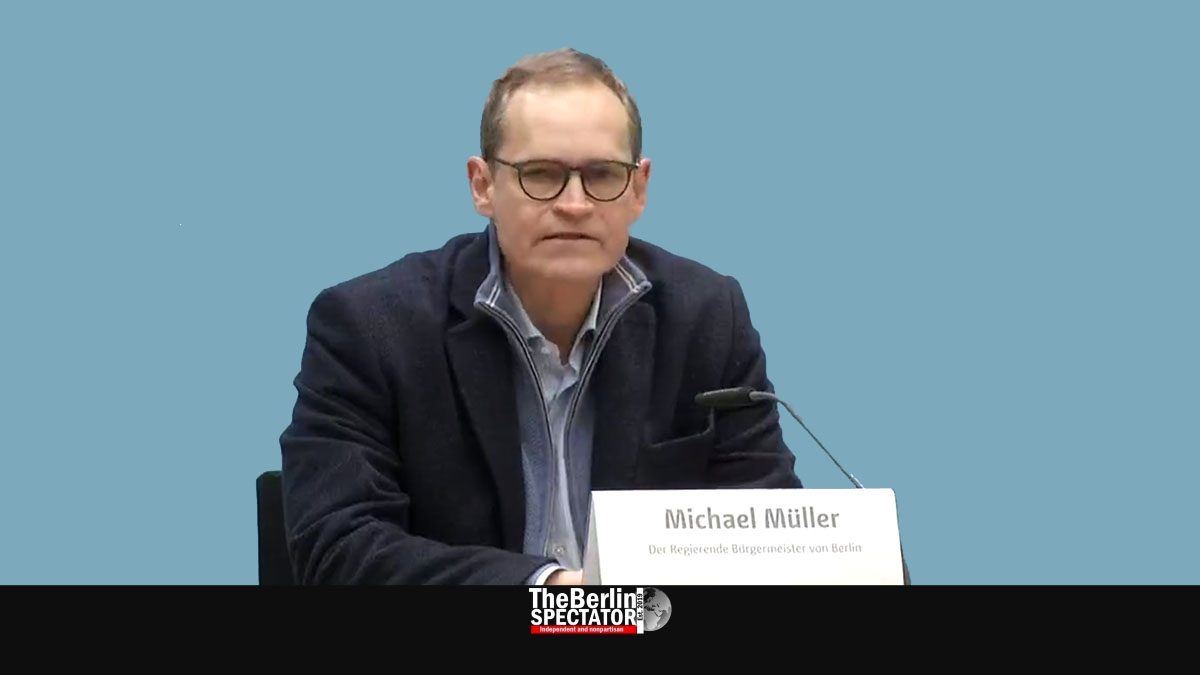 In Berlin, the Corona infection numbers have increased yet again. The German capital’s Incidence now stands at 136.8. On Saturday evening, the Senate announced new Corona rules. But the “emergency brake” does not apply.

Berlin, March 27th, 2021. Update: March 28th, 2021, 07:22 a.m. CEDT (The Berlin Spectator) — On Saturday, the Berlin Senate introduced partially new Corona rules some of which have not been tried in any other federal state in Germany. By doing so, Governing Mayor Michael Müller and his coalition partners reacted to the rapidly rising infection numbers in the ongoing third wave. Berlin’s Seven Day Incidence Number now stands at 136.8. All twelve districts are above 100, Neukölln has almost reached 200, which is extremely high.

Berlin will now force companies to let more employees work from home. They also have to offer Corona tests to their staff members. In order to enter malls, non-essential shops, massage practices, hairdressers’ locations, similar places or cultural venues, everyone needs a negative rapid Corona test result. The new rules will be officially announced on Tuesday, in the city’s gazette, and take effect on Wednesday.

These are the new rules, one by one:

> Companies need to let at least half their staff work from home. More than 50% of all employees should never be present at the office at once. This is about “computer screen jobs”. There are some exceptions.

> Medical masks (FFP2 standard) are generally required indoors, except at home. Unprotected contacts in any buildings are supposed to be avoided. The same kind of masks need to be worn in public transport.

> Reopening steps that had been planned were just scrapped because of the rising infection numbers.

> The contact restrictions remain the same, meaning up to five people from up to two households may gather. Children up to 14 years of age do not count.

At the last Corona conference Chancellor Angela Merkel had held with the First Ministers, First Mayors and Governing Mayor Müller, an “emergency brake” had been announced. In federal states or regions with Incidences higher than 100 for three days in a row, the old, stricter lockdown rules that had applied in February were supposed to kick in again. But the Senate refrained from this measure which would have included closing all non-essential retail businesses yet again.

Müller said leading scientists in Berlin had recommended the kind of steps he had announced today. They had told the Senate to do anything it could to make sure contacts were being reduced, and to make residents use the test opportunities the city state of Berlin was giving them.

The Governing Mayor, Culture Senator Klaus Lederer and Commerce Senator Ramona Pop asked all Berliners to reduce their contacts during the upcoming Easter holiday as much as possible, even though this was the opposite of what people usually did around Easter. Müller said everyone could contribute to reducing the risk of infection, also by wearing medical masks more often, in all kinds of situations.

Senator Ramona Pop stated, an overburdening of Berlin’s health system needed to be avoided. A “flat curve” in the statistics was important. This was why the Senate had tried to find measures that would improve things.