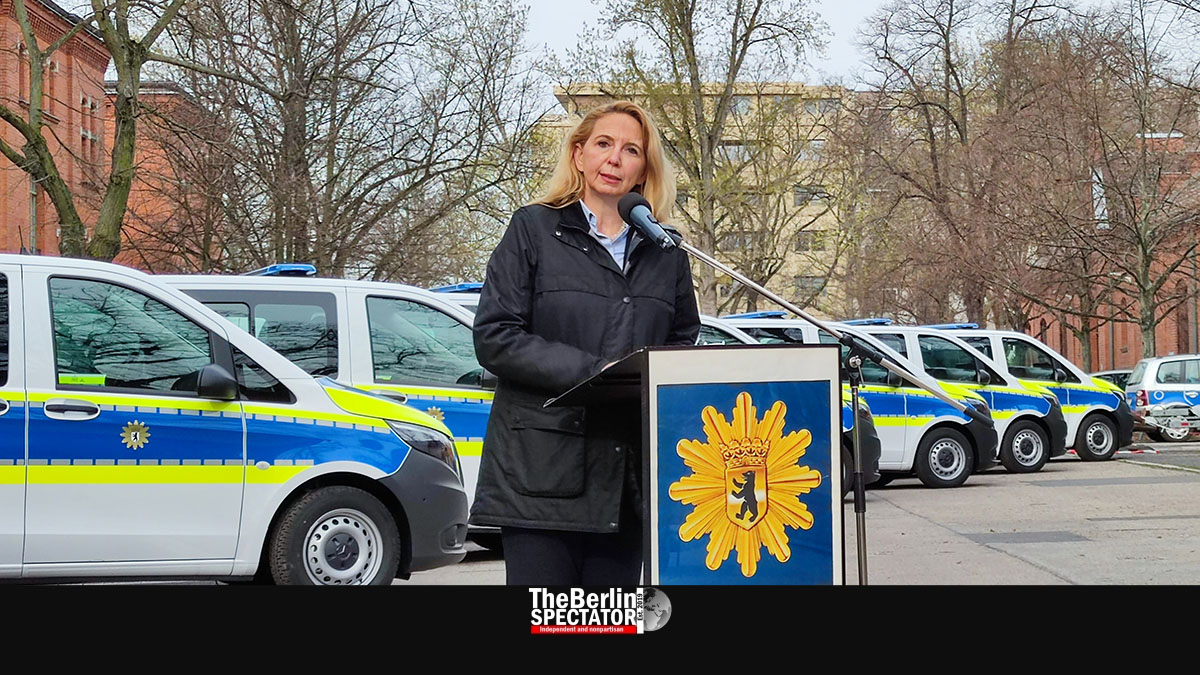 Berlin, April 15th, 2021 (The Berlin Spectator) — The Berlin Police Department got a present from the Senate today, namely As many as 55 Mercedes ‘Vito Tourer Base’ vans. So far, police officers are forced to squeeze into tiny Opel family vans with their gear and everything else they need to bring along. Now they will have a lot more room. Berlin’s Interior Senator Andreas Geisel and the city’s Police Chief Barbara Slowik presented the new patrol cars at the police headquarters for precinct 5 in the city’s Tempelhof district on Thursday morning.

“Good work requires good equipment”, Senator Geisel stated. He said whenever he had visited police stations, there had hardly been a subject officers had talked to him about more often than patrol vehicles. “We have invested a lot into the Berlin Police in the past few years, and we have achieved a lot as well”, the Senator said. “Each Euro spent is an investment into security in our city.” Both Senator Geisel and Police Chief Slowik had their photos taken with the new vehicles.

“The equipment and gear my colleagues use has been improved continuously in the past years”, Mrs. Slowik said on Thursday. They had received new duty weapons, new protective vests and new clothing. All of the items needed to fit into Berlin’s patrol vehicles. Therefore, the acquisition of higher class vehicles had been “the right decision, and an important investment into improved working conditions for my colleagues.”

A spokeslady for the Berlin Police Department showed one of the new cars to The Berlin Spectator’s reporter. They feature tables for laptop computers for both the driver and the front-seat passenger. In the back, they have drawers for helmets and the rest of the riot gear officers in Berlin need on a regular basis. There is another drawer for machine guns which the cops only bring in case of terror attacks or killing sprees. Above all, the cops who are lucky enough to be able to use those 55 Mercedes vans now will have far more room than those who drive those ridiculous Opels.

The police vans’ tailgates serve as roofs as wells, when the officers need to deal with a case of any kind, or when they check motorists. Even when the tailgate is open, the emergency lights will still be seen, because two of them were integrated into the bottom of those rear doors. As Senator Andreas Geisel pointed out, getting new patrol cars is about far more than just the vehicles themselves. For instance, the communication systems, sirens and lights need to be installed.

This time, Berlin police officers who actually use patrol cars all day long were part of the selection process. Several workshops were dedicated to finding the right kind of vehicle. Of course it had to be within the budget.