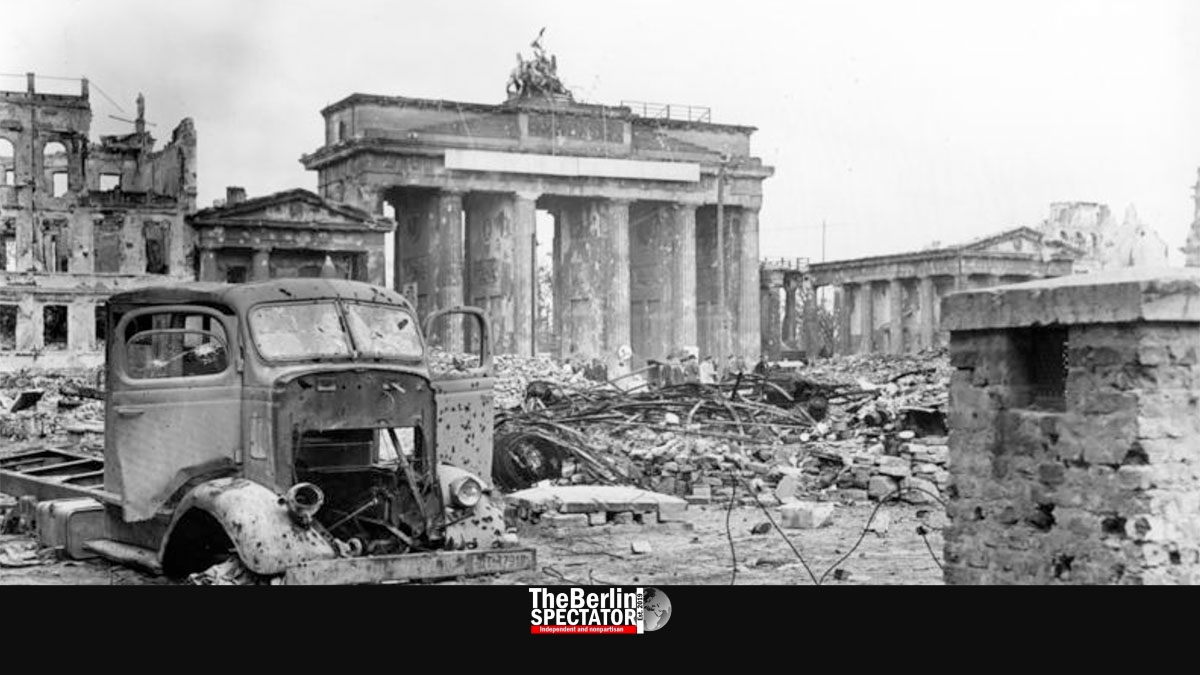 Seventy-six years after fascist Nazi Germany was defeated by the Allies, politicians in its successor state, the Federal Republic of Germany, thanked the liberators. It took Germany a while to see May 8th as the day of liberation.

Berlin, May 8th, 2021 (The Berlin Spectator) — Seventy-six years after the Allies ended WWII and the Holocaust by liberating Europe, President Frank Walter Steinmeier said Germany remembered the suffering and terror the Nazi tyranny had spread across Europe, the dead and the victims of violence, of racial hatred, of the war of extermination and of the Shoah. Without remembering the crimes that had originated from Germany, the crimes committed by Germans, Germany’s history was not comprehensible, Steinmeier stated.

Germany was very thankful to the Allies in the East and the West for liberating “us” and the entire continent from the Nazis. President Steinmeier said, on May 8th, 1945, Germany had been liberated from outside. Many more years of suppression and silencing had passed afterwards, until the inward liberation had taken place. According to him, it was a “tedious and painful process”. Without the latter, Germany’s democratic self-awareness was unthinkable.

The examination of national socialism and remembering the injustice and guilt did not weaken Germany’s democracy, Steinmeier stressed. The opposite was the case. Its resilience was strengthened. “Concealment will not give us strength or self-consciousness, while being critical and honest with ourselves and the history of our country will”, the German President said ahead of today’s anniversary.

Foreign Minister Heiko Maas said the Germans were thankful to those who had risked and sacrificed their lives by the millions in order to liberate the world from fascism. “Unfortunately, the idea of fascism has not been eliminated completely until today”, Maas stated. “We have to defend democracy and freedom on a daily basis.”

On May 6th, 1945, the German Wehrmacht’s Colonel-General Alfred Jodl walked into the HQ of the Supreme Headquarters Allied Expeditionary Force (SHAEF) in the French city of Reims. The SHAEF was headed by U.S. General Dwight Eisenhower. Jodl wanted to sign a partial surrender, to the Western Allies only, but he did not get what he wanted. Eisenhower insisted on an unconditional surrender which included the Soviet Union as well. On May 8th, 1945, Jodl signed.

Not only had Germany attacked and conquered the better part of Europe in a war that involved terror, death and expulsion all over the place. But it also planned and implemented the Holocaust. Six million European Jews and countless members of other minorities, including Gypsies and homosexuals, were murdered in a giant, carefully organized campaign. Concentration camps, the worst places on Earth, were built for that purpose.

In the Federal Republic of Germany, May 8th was seen as a defeat for Germany rather than a liberation, for many decades after the World War II. Finally, in May of 1970, 51 years ago, the Social-Democratic Chancellor Willy Brandt used the word “liberation” and the term “new beginning” in this context.

It took 40 years until things were finally put in perspective. On May 8th of 1985, thirty-six years ago, President Richard von Weizsäcker held a celebrated speech at the Berlin Bundestag. “All of us, whether guilty or not, whether young or old, must accept the past. We are all affected by the consequences and liable for it”, von Weizsäcker stated back then. “We Germans must look the truth straight in the eye, without embellishment and without distortion. […] There can be no reconciliation without remembrance.”