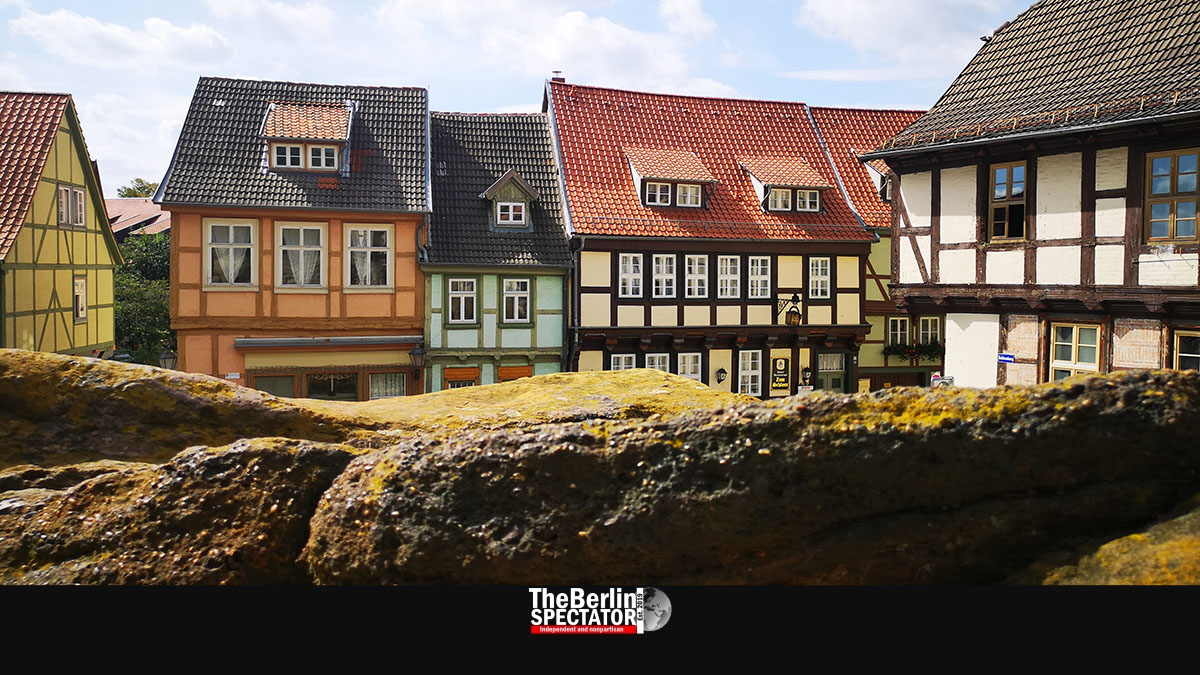 Germany has a few medieval towns that are too beautiful to be real. Quedlinburg, a major tourist magnet, is one of those. Hundreds of thousands of visitors per year came here before Corona hit.

Berlin, August 31st, 2020. Update: May 23rd, 2021 (The Berlin Spectator) — Quedlinburg, which is located to the north of the Harz mountain range, was mentioned in an official document in the year 922. This makes it at least 1,099 years old. In 994, it received the town privilege, and the rest is history, literally, a thousand years of it. For centuries, this most beautiful town had a free secular ladies’ foundation which accommodated unmarried women from rich families. Emperors went to Quedlinburg a lot, hundreds of years ago.

This stunning settlement known as Quedlinburg survived WWII. The Allies hardly bombed the place, also because no weapons or vehicles were produced there. Nor did the town have a lot of industry.

Quedlinburg’s recent history does have a dark part: The town’s 1000th anniversary was used for propaganda purposes by the Nazis. Heinrich Himmler, one of the highest ranking regime members, was celebrated as a reincarnation of King Heinrich I. Some of the town’s Jews managed to flee, others were murdered. Today, no Jews are left in Quedlinburg.

Since Quedlinburg was part of the GDR, an issue surfaced after the war, namely decay. During the Cold War, the communist regime in East Berlin actually wanted to have Quedlinburg’s historic buildings flattened. They intended to replace them with those typical industrialized apartment blocks. A lack of funds was the only reason they did not implement this terrible idea. That is why the historic town still has its 2,000 half-timber houses.

In the town center, every single building is historic and beautiful. There are hardly any exceptions, and almost everything has been renovated at least once since Germany’s reunification. In the Corona summer of 2020, some domestic tourists were seen in Quedlinburg, the place of wonders. Here, it is absolutely impossible to shoot a bad photo.

It is not a coincidence that Quedlinburg is part of UNESCO’s list of World Heritage Sites. The cobblestone streets and alleys are stunningly beautiful. So are side streets, back alleys and the main square which is dominated by city hall, a very special Renaissance building. Up on Castle Hill, the Quedlinburg Abbey Church that was built from 1070 to 1129 and its cathedral treasure are among the main sightseeing spots as well. So are the other impressive churches in town.

Because Quedlinburg is using part of its income generated from tourism for renovations up there, the hill needs to be climbed from behind these days, as the main path from the town center is closed. Since there are so many picturesque houses on the way, forgetting to climb the hill is easy.

Before Corona, countless tourists came to see the marvel of Saxony Anhalt. Eleven years ago, the municipality counted 230,000 nights stayed at Quedlinburg’s hotels and 1.5 million one-day visitors per year. This number kept on increasing until Corona messed it all up in early 2020. Only the summer was sort of safe, since the infection numbers were low and everything happened outdoors.

Quedlinburg has found a good way of dealing with all of its tourists. First they are being guided to big parking lots in front of the city wall. This is where they purchase parking vouchers before they walk into the old town from all sides. They can pick official tours with very motivated guides, or they can just walk around on their own and take pictures of all medieval building they find.

One thing is certain: Walking around makes tourists hungry. This is the moment a million restaurants in Quedlinburg are waiting for. The Schnitzel and the cheese cake they offered in August of 2020 were somewhere between average and good. The wasps in the area proved to be big cake lovers too.

Quedlinburg is a great daytrip destination for those who live close by, or an excellent spot to look at on the way into the Harz mountains. Admiring the entire old town and having a nice meal takes about 6 hours in total. Those who want to enter every church they see will need more time. So will avid photographers.