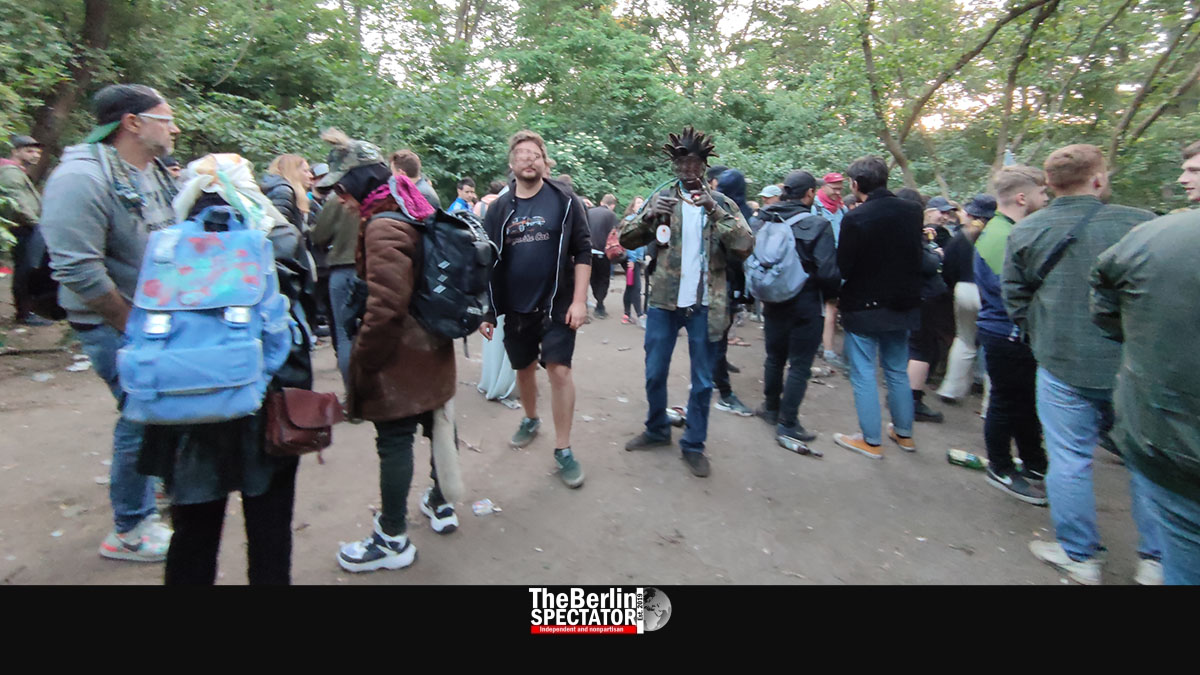 Yet again, thousands of people populated several parks in Berlin this weekend, for parties during which they completely ignored all Corona rules. At Mauerpark, two police officers were attacked with bottles.

Hidden behind trees and other plants, the main party spot at neighboring Hasenheide park (see main photo at top of page) is inaccessible to police cars. The officers would have to get out of their vehicles, turn off the engines and follow the noise to locate the place. This morning at 5:15 a.m., countless people were still partying hard at that secret spot. Around it, they were using bushes as bathrooms again. It was a disgusting sight. At the party location itself, intoxicated or drugged individuals some of whom could hardly stand anymore, moved to the Techno sounds.

The constant noise was a minor issue compared to the fact that they were close to each other. Nobody kept any distance here, and nobody wore masks. Trash was scattered all over the park yet again, including empty bottles and Kleenex tissues used as toilet paper. The same situation was reported at several other parks as well.

On early Saturday morning, right after midnight, officers in a police van checked the situation at Hasenheide, by driving to the locations they could reach in their vehicle. At that point, their colleagues were still busy chasing away party people from other parks. At 3:00 a.m., dozens of officers appeared and ended several parties, some of which were quickly moved to other spots in the park.

At James Simon Park and Monbijoupark in the city center, the Berlin Police Department ordered some 2,000 party people to leave the location on Friday night. At the same time, residents in the Prenzlauer Berg borough called the police because of the noise caused by a giant party that was going on at Mauerpark. When the officers arrived, two of them were attacked when bottles were thrown at them. Several legal proceedings were initiated against persons who were on site, for aggravated battery and attacks.

At yet another Berlin park, namely Bürgerpark in Pankow, “violent acts” were reported. After 11:00 p.m. on Friday, the police appeared, ordered about 200 people to leave and started investigation procedures. But nobody seems to be able to really control those illegal parties at parks, apart from the weather. At low temperatures and in the rain, they do not take place.