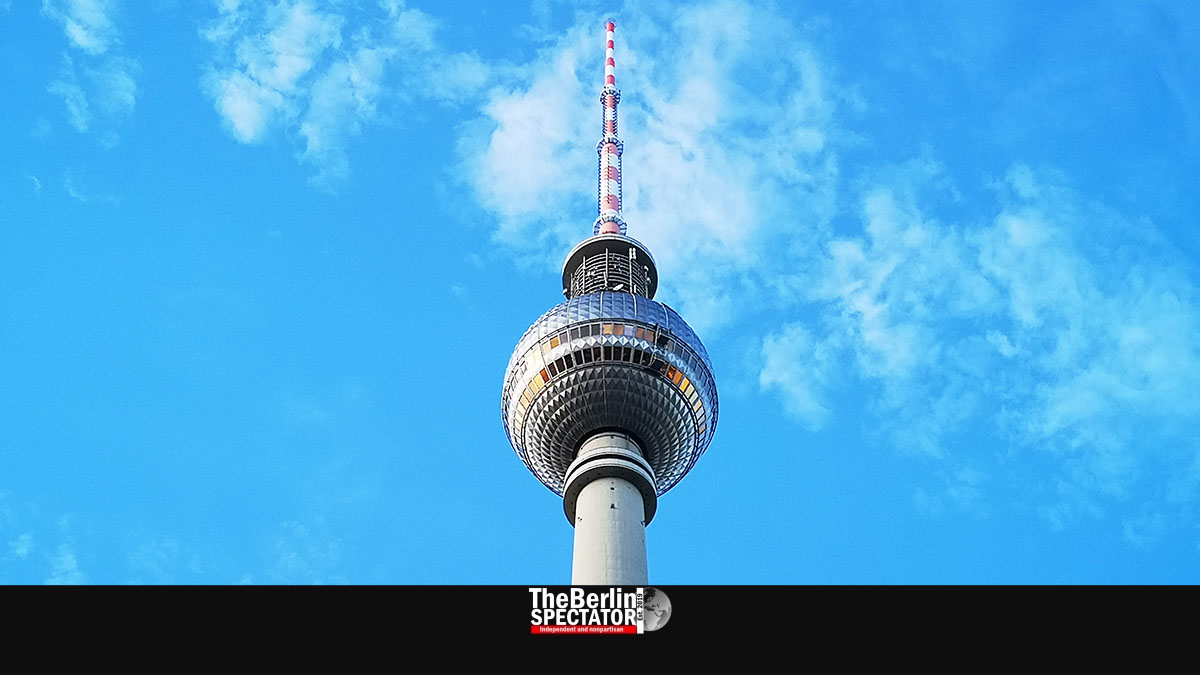 The tallest construction in Germany, Berlin’s TV tower, is impressive. With a height of 368 meters (1207 feet), it does scratch the sky. The former GDR erected the tower five decades ago.

Berlin, March 15th, 2019. Update: July 1st, 2021 (The Berlin Spectator) — Comparing it to the world’s highest buildings is probably wrong. We will do it anyway: People standing on the observation platform of the Burj Khalifa in Dubai would laugh at Berlin’s TV tower, since that building is more than twice as high.

There are a total of 49 buildings in the world which are higher, many of them substantially. But does size really matter? Besides, it would be pretty hard to look at Berlin from One World Trade Center in Manhattan or from the ‘Guangzhou CTF Finance Centre’, wouldn’t it?

When Berlin’s ‘Fernsehturm’ was completed and inaugurated 52 years ago, on October 3rd, 1969, it was a sensation. This still applies today. In reunified Germany, the tower is among the ten most popular sightseeing destinations, for a reason.

Yes, the TV tower might be getting old, but it sure as hell is one of the most important elements in Berlin’s skyline. In all TV series and movies shot in Berlin, the big tower will appear at least once, including the old James Bond flick ‘Octopussy’ with Roger Moore and ‘The Bourne Supremacy’ with Matt Damon. On top of it all, the tower is visible on most postcards offered in the city.

More than One Purpose

Selfies with the TV tower are extremely popular too. The only disadvantage: Shooting those will not really work in landscape mode, unless they are being taken from Potsdam.

The tower has more than one purpose:

The fact that the view from the sightseeing platform is stunning, is not a surprise. On days with good weather, visitors will see the entire city from up there. This applies to the tower’s restaurant and café as well. Both the platform and the restaurant are located at a height of about 200 meters (656 feet).

Good views cost good money. Regular tickets for the platform start at 19.50 Euro. Sitting down at an aisle table in the revolving restaurant are at least 25.50 Euro. A seat at a window table, which is the best option of them all, is a bit more.

The restaurant menu offers good quality dishes, including meat, vegan and other choices, as well as cake and fine wines. And yes, those need to be paid as well.

Walter Ulricht, the communist GDR’s dictator, ‘oversaw’ the planning stage of the TV tower in the 1950s, while the actual construction commenced in 1965. Several office and apartment buildings were pulled down for the big project.

Taking the elevator to the accessible part, located in the tower’s ‘sphere’, is an experience in itself. It moves at 6 meters (20 feet) per second. Passengers can see the elevator shaft racing by through a glass roof. The ‘sphere’ has a diameter of 32 meters (105 feet).

The English version of the TV tower’s website can be accessed here. By the way: There is a German version of this article which you can find here.