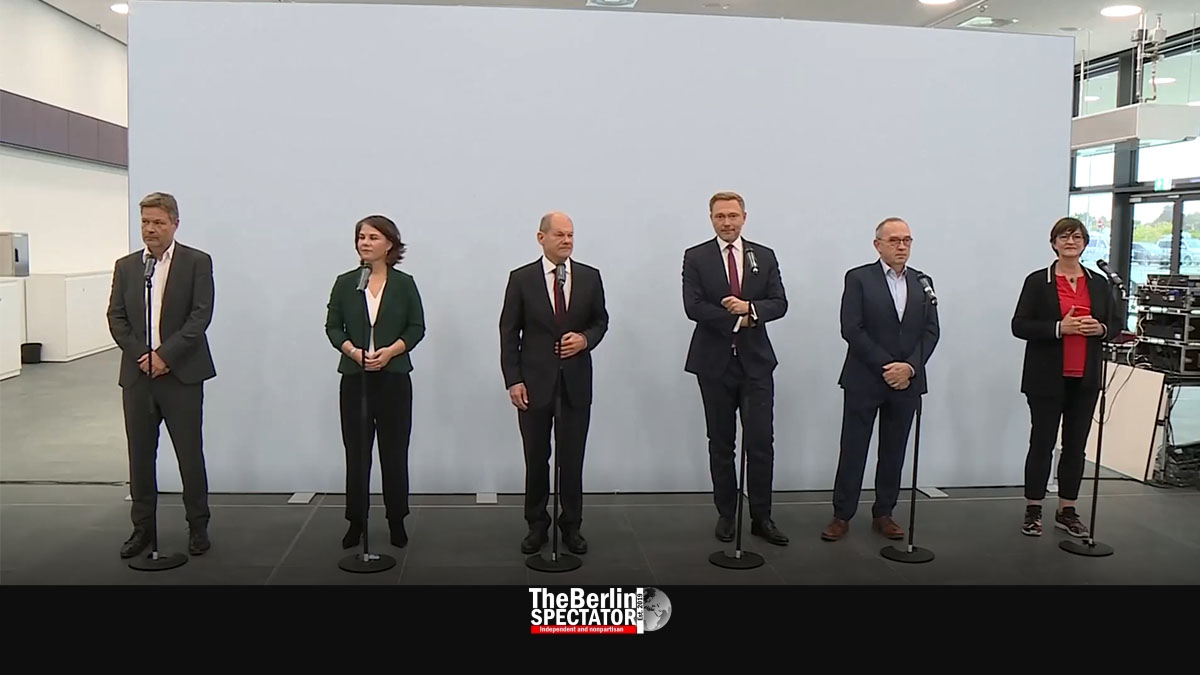 In Germany, the chairpersons for the center-left SPD, the center-right FDP and the left-wing Greens held preliminary coalition talks for many hours yet again. Now, their leaders are ready to recommend actual coalition talks to their parties.

Berlin, October 15th, 2021 (The Berlin Spectator) — The likelihood for the formation of a three-way ‘traffic light coalition’ in Germany just increased. After another two rounds of talks, Olaf Scholz of the SPD, who is Finance Minister, Vice Chancellor and his party’s candidate for Chancellor, stood in front of countless cameras in Berlin on Friday afternoon. “We held intensive talks. Yesterday, they lasted until the early morning hours”, he told the press in the German capital.

Talks About Basis for Talks

Scholz said he and the other participants of the preliminary coalition talks had now agreed to a paper which could be the basis for actual coalition talks. It would be submitted to the participating parties. They are Scholz’ SPD, the pro-business FDP headed by Christian Lindner and the environmentalist Green’s co-chaired by Annalena Baerbock and Robert Habeck. Once and if the parties decide to go ahead, there will be official negotiations.

Progress in many fields needed to be worked on in Germany, Scholz stated. This included the social and economic development as well as the tasks the country had to work on in Europe. These goals had been included in the document the parties had created. Modernization was a very important aspect, for instance in the governing authorities but also in the industry. A massive expansion of regenerative energy was necessary, Scholz stressed. He said this was about the largest industrial modernization project Germany had seen in more than 100 years.

The Social Democrat also stated the child poverty in Germany and the affordable housing crisis needed to be fought. Stable and safe pensions had to be secured too. Solidarity was yet another subject that needed work. This field was connected to a higher minimum wage, Scholz explained. An new start in Germany was possible, one pushed by the three parties that had come together in those preliminary talks. The latter had been trustful and constructive, including discussions about subjects on which there had been different perspectives.

For the Greens, Annalena Baerbock said this was about forming “a coalition of reforms and progress”. The parties involved were very different, she stated. For this reason, they also had to make concessions. Climate justice was an important aspect in Germany’s society. Its social market economy needed to be transformed into an “ecologic social market economy”. A modernization and digitization of “our country” was a priority too.

‘Greater than the Sum of its Parts’

Christian Lindner of the FDP stated three political powers had held discrete and serious talks, and they had been eager to get to know each other’s positions on issues. Because of the seriousness of the preliminary talks, many people in Germany had developed hope “for a new start in this country”. The constellation in which the FDP, “a party of the political center”, had held talks was an opportunity. According to Linder, there there is a chance a “possible coalition” would be “greater than the sum of its parts”. This was the most fancy sentence of the press conference”.

It is unclear exactly how quickly the three parties will take their decisions for or against going ahead with official coalition talks. Olaf Scholz wants to form a government before this year ends. The term ‘traffic light coalition’ refers to the colors of the three parties that might want to create it, namely the red SPD, the yellow FDP and the green Greens.