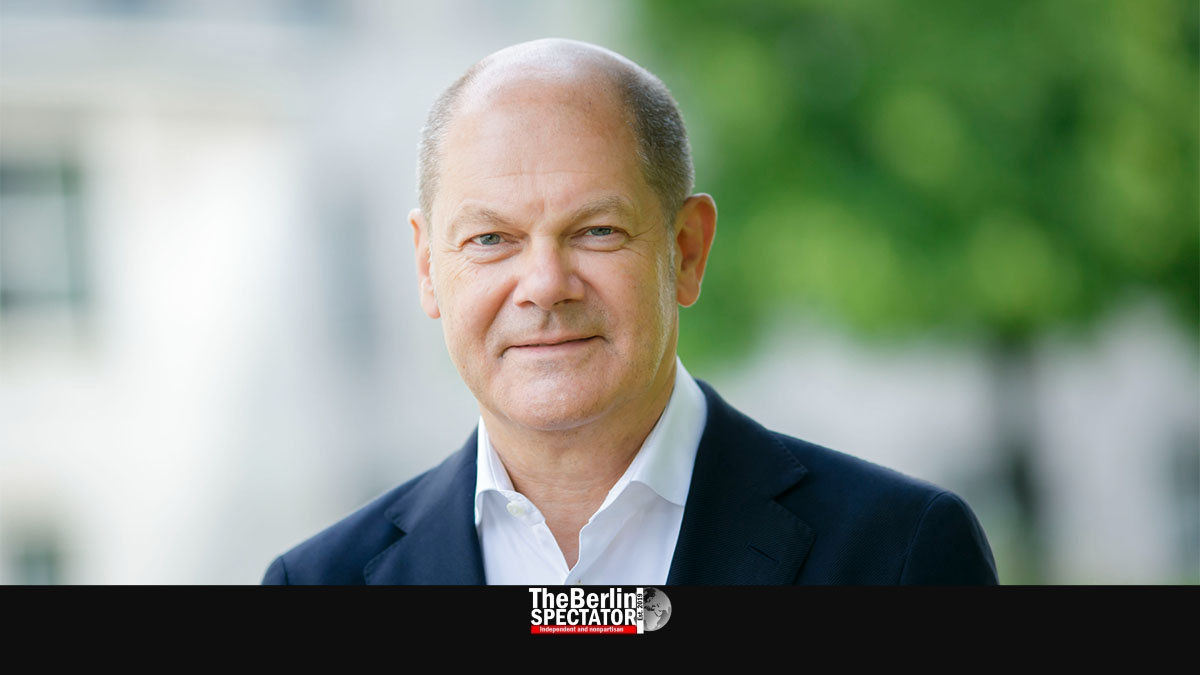 Germany has a new head of government. Olaf Scholz is the ninth Chancellor since the Federal Republic was founded in 1945, and the fourth Social Democrat in this position.

Berlin, December 8th, 2021. Update: 12:03 p.m. CET (The Berlin Spectator) — Germany has a new Chancellor. Olaf Scholz was the country’s Finance Minister and Vice Chancellor under his predecessor Angela Merkel. At the Berlin Bundestag he said he accepted the election. After the election result was announced by the parliament’s new President Bärbel Bas, countless MPs congratulated him. This is the first election of a German Chancellor at which everyone wore masks.

In order to be elected, the 63-year-old Scholz needed 369 votes. He got 395. Exactly 303 Bundestag members voted against him and six abstained. Three votes were not valid. Since the three new coalition parties, Scholz’ SPD, the Greens and the FDP, have a total of 416 MPs, the result does not look too good, at first glance. But, according to Rolf Mützenich, the SPD’s floor leader, several Social-Democratic MPs were not able to take part since they are sick. That is why an interpretation of the result is more complicated.

OIaf Scholz’s election ends Angela Merkel’s time at the chancellery. In coalitions of different kinds she reigned for 16 years, just like the late Christian-Democratic Chancellor Helmut Kohl. Merkel governed for exactly 5,860 days, which means that Kohl’s reign was 10 days longer. Mrs. Merkel used to be his Environment Minister. Her CDU’s candidate for Chancellor, Armin Laschet, brought home the worst result the conservatives ever had on Super Sunday, the big elections on September 26th.

Just before 11:00 a.m., Olaf Scholz was officially declared Chancellor in by President Frank-Walter Steinmeier in a very short ceremony. As President, Steinmeier is neutral, but he used to be a Social Democrat too, and he was Gerhard Schröder’s Chancellery Minister. Schröder was the last SPD Chancellor before Scholz. He headed a coalition government with the Greens until he lost the elections in 2005, which is when Angela Merkel became head of government. An estimated seven to eight percent of all Germans, children of up to 16 years of age, have not lived under a different Chancellor, until today.

A swearing-in ceremony took place at the Bundestag in the early afternoon. At about 1:30 p.m., the members of the new cabinet were going to be announced and sworn in at the parliament.

Scholz is now heading a kind of coalition Germany has not had before. His center-left SPD is cooperating with the left-wing Greens and the center-right Free Democrats (FDP). Of course, the names of the Ministers are known. Christian Lindner of the FDP is Finance Minister, the SPD’s Karl Lauterbach is Health Minister and the Green politician Annalena Baerbock is taking over the Foreign Ministry.

The coalition agreement contains ambitious plans in regard to the climate policy, and the fight against Corona is supposed to be stepped up. Tax hikes were ruled out. Also, the government wants to try to resolve the affordable housing crisis and work on Germany’s digitization.