Germany: Scholz and Governors Agree to ‘Stay the Course’ in Regard to Corona Rules 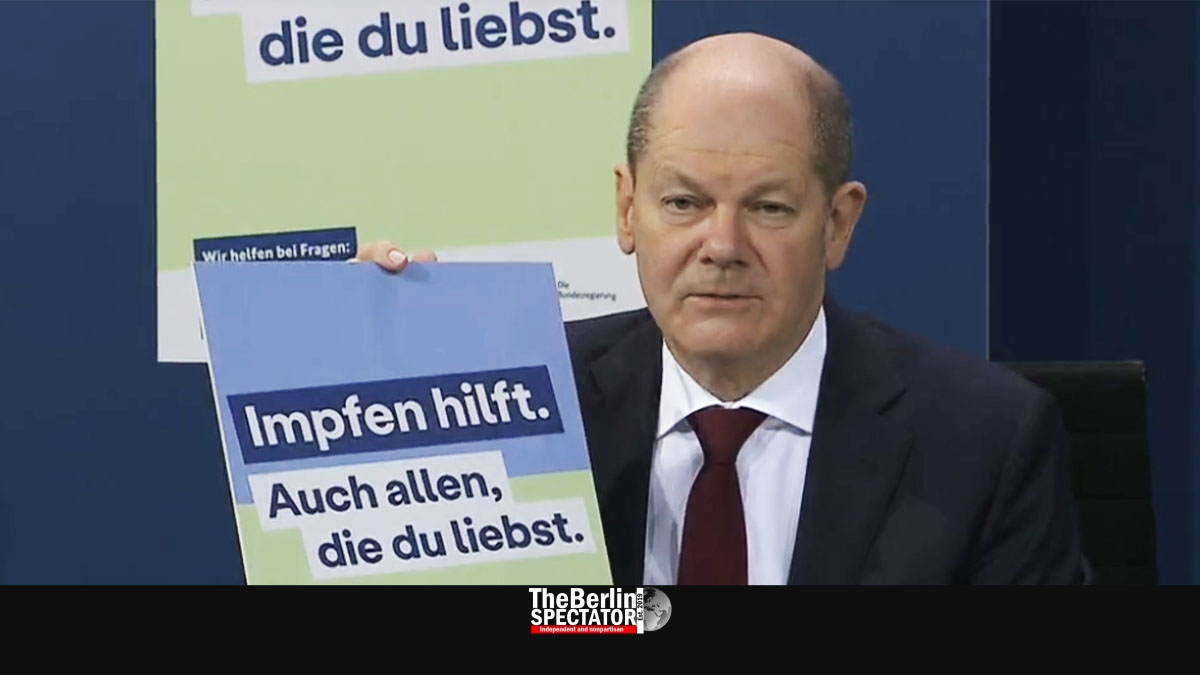 In Germany, Chancellor Olaf Scholz and the First Ministers held another online Corona conference on Monday. They decided not to tighten the Corona regulations, but not to ease the restrictions either.

Berlin, January 24th, 2022 (The Berlin Spectator) — On the 727th day of the Coronavirus pandemic in Germany, Olaf Scholz and the sixteen Governors discussed the situation yet again. As expected, they came to the conclusion that Germany has the Corona rules it needs right now. While tightening them is not necessary, easing the restrictions would not be appropriate because of the extremely high number of new Corona infections Germany is registering these days. Scholz said the participants of the Corona meeting had agreed to stay the course.

He stated the contact restrictions would continue to apply wherever people got together. A maximum of ten persons may gather, according to the regulations that are in place in the Federal Republic. Access to restaurants, cafés, pubs, cultural venues and non-essential shops is restricted. Unvaccinated persons may not enter, vaccinated individuals without booster shots need negative Corona tests. “We do not know how the infection numbers will develop” or whether the situation would become more dramatic, Scholz said.

The Chancellor also introduced a new advertising campaign for Corona vaccinations. It will include billboard ads and Internet banners as well as radio and television spots. Scholz held up an ad that read “Vaccinations help”. He conceded the pace of Germany’s vaccination campaign had decreased and that the country had not come as far as it should have. By now, more than half of all Germans and residents of other nationalities got booster immunizations. The vaccination rate is above 73 percent.

Hendrik Wüst, the chairman of the Conference of First Ministers and head of government in North Rhine-Westphalia, said vaccinations remained the best way to fight the pandemic. They were the way out of it. Exactly two years after it had come to Germany, the pandemic was very dynamic right now, Wüst stated. He said the number of Corona patients in intensive care had increased again for two days in a row. For those reasons, the federal states had agreed to keep the Corona regulations in place.

Berlin’s Governing Mayor Franziska Giffey was at the chancellery with Scholz and Wüst, while all other First Ministers took part in the discussion via video chat. Mrs. Giffey stressed the importance of protecting the critical infrastructure because of the rising number of sick notes that were being handed in. She said Berlin and the other states were prepared. Pandemic plans had been put in place for the police and fire departments, and the situation would be monitored constantly. The Governing Mayor also defended the city state of Berlin’s decision to suspend the compulsory attendance at schools. In this situation, the parents needed to have the right to decide whether their children should go to school or study online. This decision was announced today.

PCR Tests to be Prioritized

On the national level, one aspect will change: Because there are not enough PCR tests in Germany anymore, the remaining ones will be used for high-risk patients, doctors, nurses and other caretakers. Hendrik Wüst criticized the lack of those tests and said Health Minister Karl Lauterbach had promised to resolve the issue. The next Corona conference is scheduled for February 16th, 2022. In case the situation deteriorates substantially, it will be preponed.