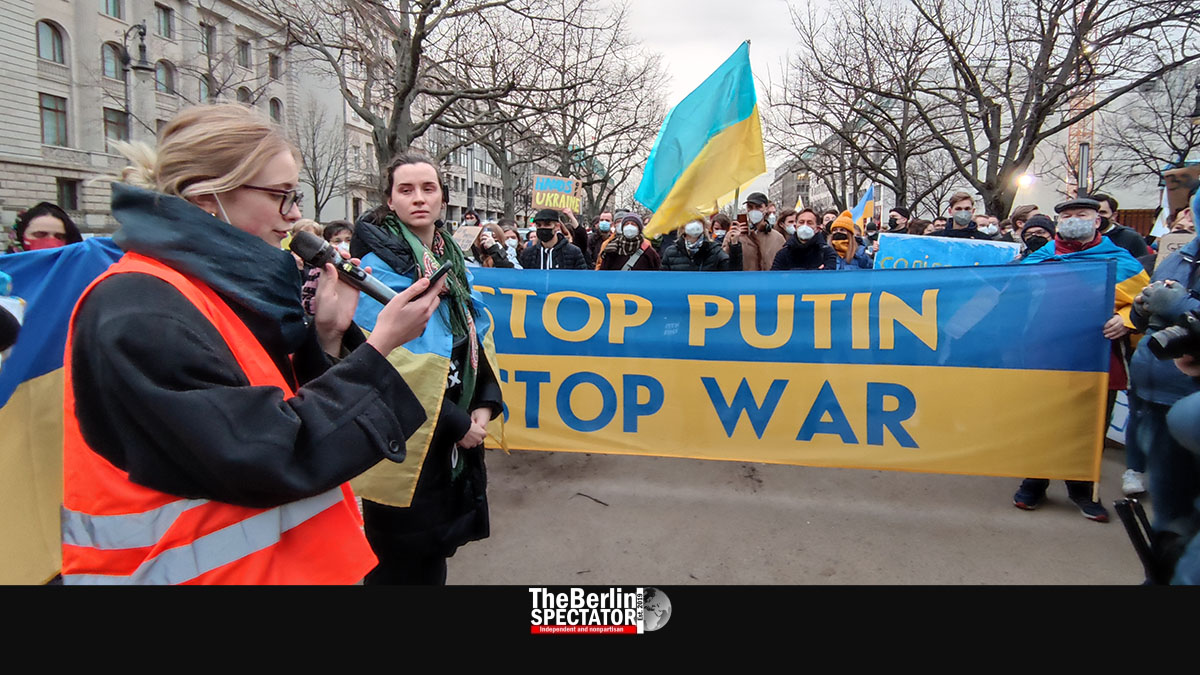 In Berlin, some 500 Ukrainians and Germans protested against Russia’s aggression in Ukraine on Tuesday evening. Around the corner, at the chancellery, Olaf Scholz condemned Vladimir Putin’s actions.

Berlin, February 22nd, 2022 (The Berlin Spectator) — At ‘Unter den Linden’ in Berlin, right in front of the elegant Russian Embassy, several hundred people appeared on Tuesday evening, in order to be part of a protest against Russia’s military operation in and around Ukraine. The demonstration was organized by Ukrainian expatriates and the youth organizations of four German parties, namely the center-left SPD, the center-right CDU, the center-right FDP and the left-wing Greens. Prominent members were on site.

The four German party organizations involved released a statement. “As a young generation which did not witness the Cold War, it is our responsibility to preserve the peace and prevent war”, it read. Participants of the rally held signs saying “Get out of Ukraine!”, “Solidarity with Ukraine!”, “Stop the war!”, “Донбасс это Украина!” (“Donbas is Ukraine!”) or “Putin! Hands off Ukraine!”. Some demonstrators criticized Germany for not providing weapons to Ukraine.

A few steps away, members of the far-left party ‘Die Linke’ gathered with a sign saying “Weapons down!”. Asked who should take them down, a man behind the sign said “Both sides.” At today’s protest, these individuals were the only ones who did not seem to think Russia is the aggressor. Everyone else obviously did. Several protests of the same kind were registered at Moscow’s Embassy, according to the Berlin Police Department. At least two of them took place at the same time. Their participants mixed.

Earlier today, Chancellor Olaf Scholz had announced an end to the natural gas pipeline project North Stream 2. He said he had ordered the Ministry of Economics to take the appropriate steps in order to make sure the pipeline, which was completed only a few months ago, would not be certified. “Without the certification, North Stream 2 cannot go into service”, the Chancellor confirmed.

Like Foreign Minister Annalena Baerbock before him, Scholz condemned Vladimir Putin’s recognition of the two self-proclaimed ‘People’s Republics’ in eastern Ukraine as an “infringement of international law”. Putin had not only breached the Minsk Protocol, but also the United Nations Charter about the territorial integrity and sovereignty of states in the world.

In the presence of Ireland’s Taoiseach Micheál Martin, Scholz reiterated Germany would not send weapons to Ukraine. “We are strengthening Ukraine’s economic resilience by being the biggest financial stabilizer of the country.” This would not change, Scholz vowed. It was important to prevent another escalation from taking place. He called on Russia to support the efforts to avert a war. He also said Moscow had no backing for its latest actions at the U.N. Security Council.

Germany: International Travel in the Corona Crisis is Supposed to Become Easier