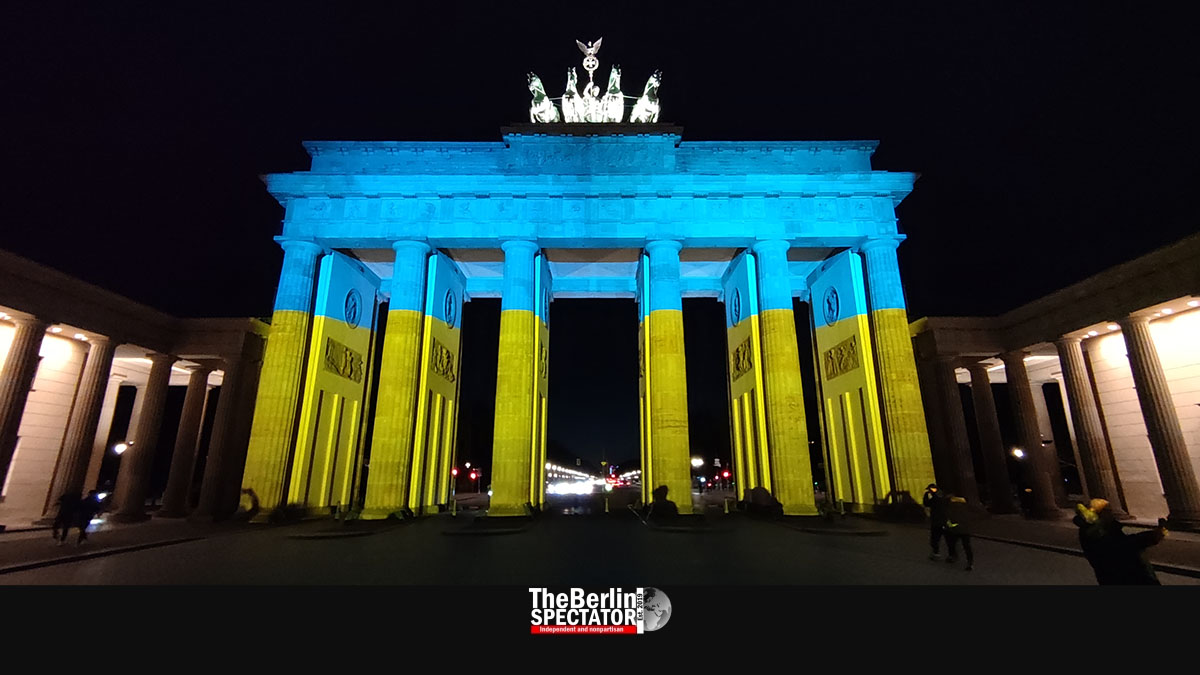 Brandenburg Gate, one of Berlin’s main landmarks, was illuminated in the colors of the Ukrainian flag on Wednesday. This way, the city wanted to show solidarity with the country that is being threatened by Russia.

Berlin, February 23rd, 2022. Update 8:00 p.m. CET (The Berlin Spectator) — A day after Ukrainian expatriates and Germans demonstrated their solidarity with Ukraine in several protests in front of the Russian Embassy in Berlin, the city itself showed what side it is on. Today’s activity took place a few steps down the street from the Russian Embassy, at Brandenburg Gate, which was lit in blue and yellow, the colors of Ukraine.

Dozens at the Gate

A few dozen Berliners, and possibly some tourists, appeared at the Gate at around 6:45 p.m. CET, the moment the illumination commenced. Many of those present were press photographers and television crews. Two individuals on site brought their own Ukrainian flags. The man who illuminated the Gate using modern spotlights on a truck parked on Paris Square between the American and French Embassies said he had been hired by Red City Hall which accommodates Governing Mayor Franziska Giffey’s office.

She is in quarantine until Friday because of a Corona infection without symptoms, but commented on the crisis. Berlin stood with Ukraine, Mrs. Giffey stated. “By illuminating Brandenburg Gate, we are sending a signal. We are showing our solidarity with the people of Ukraine, with the many Berliners with Ukrainian roots and with Russians who are hoping for peace in both Russia and Ukraine.”

“They want nothing more than an end to the escalation and a peaceful resolution to this threatening conflict”, Franziska Giffey said. Other Mayors of big cities commented as well. In Hamburg, First Mayor Peter Tschentscher said the federal government had condemned the breach of international law and Russia’s invasion into Ukraine. His city had the same position. “Hamburg is in solidarity with the people of Ukraine”, Mayor Tschentscher said. “We are worried about the aggravation of the conflict”, which Russia was responsible for.

In Hamburg, the youth organizations of four parties, the center-left SPD, the center-right CDU, the left-wing Greens and the center-right FDP, organized a protest against Russia’s aggression. It started in front of Russia’s Consulate at Feenteich. Ukrainian expatriates in Hamburg and several organizations were supposed to be part of the rally as well. In Paris, the Hôtel de Ville was supposed to be illuminated with the Ukrainian colors this evening. A similar display of solidarity with Ukraine was announced in London too.

In the meantime, the German Association of Cities and Communities demanded preparations for refugees from Ukraine. The organization’s chairman Gard Landsberg told the ‘Handelsblatt’ daily, those efforts needed to be coordinated closely between the federal government, the states and the municipalities. Financial means were necessary, and reception centers needed to be available.