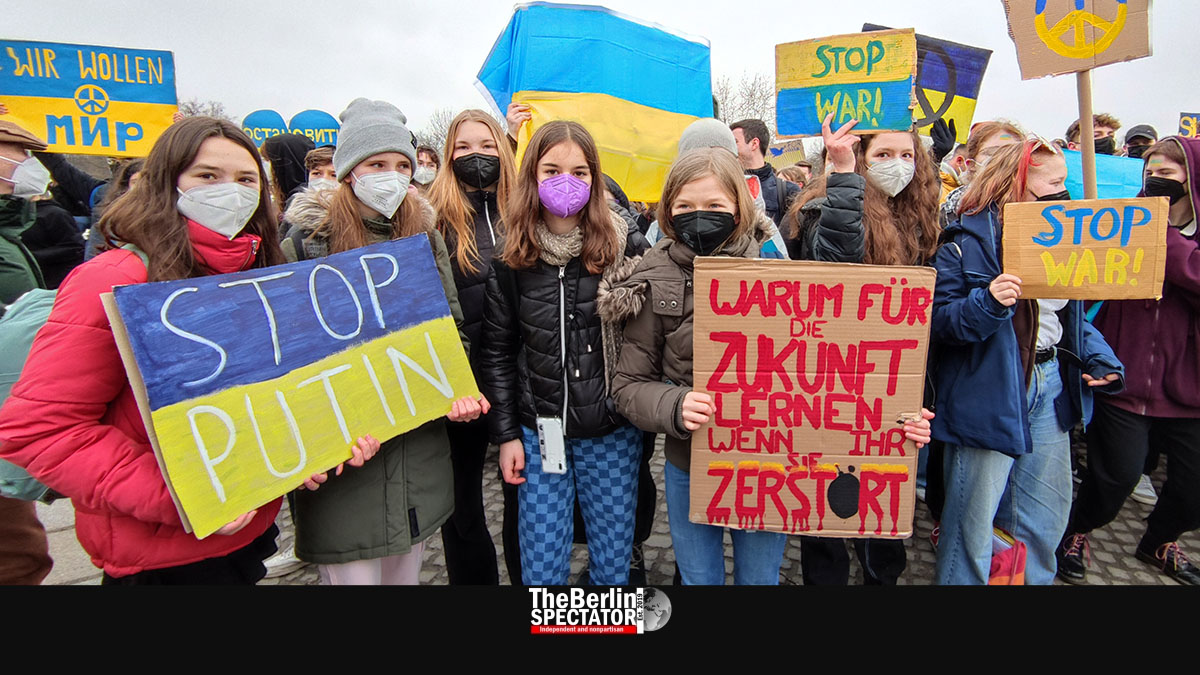 Thousands of pupils took to the streets in Berlin to demand an end to Russia’s war against Ukraine. The Fridays for Future movement was behind the rally. Its Ukrainian division had called for the protest.

Berlin, March 3rd, 2022 (The Berlin Spectator) — Organized by the Fridays for Future movement, another large protest against President Putin’s war in Ukraine took place in Berlin’s government quarter on Thursday. According to the Berlin Police Department, some 5,000 schoolkids and other Berliners participated. The organizers counted twice as many protesters. They did not seem to mind the cold, when they walked from the Reichstag building to the Ukrainian Embassy to show their solidarity. Afterwards, they marched back to Platz der Republik, the square in front of the Reichstag.

Many of the students held signs in blue and yellow, the colors of the Ukrainian flag, including primary school pupils who had come to the event with their teachers. Some of the signs said “Stop war!” or “Stop Putin!”. Others read “We stand with Ukraine”, “Save democracy in Ukraine” or “Peace for everyone”. One girl had a sign that said this: “Why should we learn for the future if you are destroying it?”. That one was referring to climate change, Fridays for Future’s (F4F) main subject.

This month’s big F4F protest originally was supposed to take place on March 25th. Because of the war that started a week ago and since F4F in Ukraine called for it, this big rally for peace was organized quickly. Pupils with family ties in Ukraine spoke to the crowd. Some speakers called for an end to oil, natural gas and coal imports from Russia.

Similar protests took place in many countries today, and in a total of 50 German cities and towns. “Let’s show solidarity! We want peace and an end to fossil fuels that are funding autocrats”, F4F said. On Sunday, hundreds of thousands of people had staged a protest against Putin’s war in Berlin. Organized by several unions and other organizations, it was the largest demonstration Berlin has seen in a while.

Individual protesters appear in front of the Russian Embassy in Berlin at Unter den Linden boulevard on a daily basis. This afternoon, an elderly lady was holding up the Ukrainian flag. This time, she was not joined by anyone else, probably because of the cold wind that blew through the German capital.

In the meantime, thousands of Ukrainian refugees have arrived in Berlin since the war started. Because their numbers keep on growing, Deutsche Bahn now runs shuttle trains between Frankfurt/Oder, a small city in Brandenburg, located at the Polish border, and Berlin Central Station.

But, The Berlin Spectator needs more supporters. Right now, we receive a low three-digit amount per month. The first digit is a 1. In order to make this a more stable project, the amount would have to be quintupled, at least.
This is the obvious question to you: Would you consider supporting The Berlin Spectator?
Even small donations help. You can choose between one-time contributions and monthly ones. And you have the choice between Paypal and Patreon. You can check out our Donations Page first. Thank you.