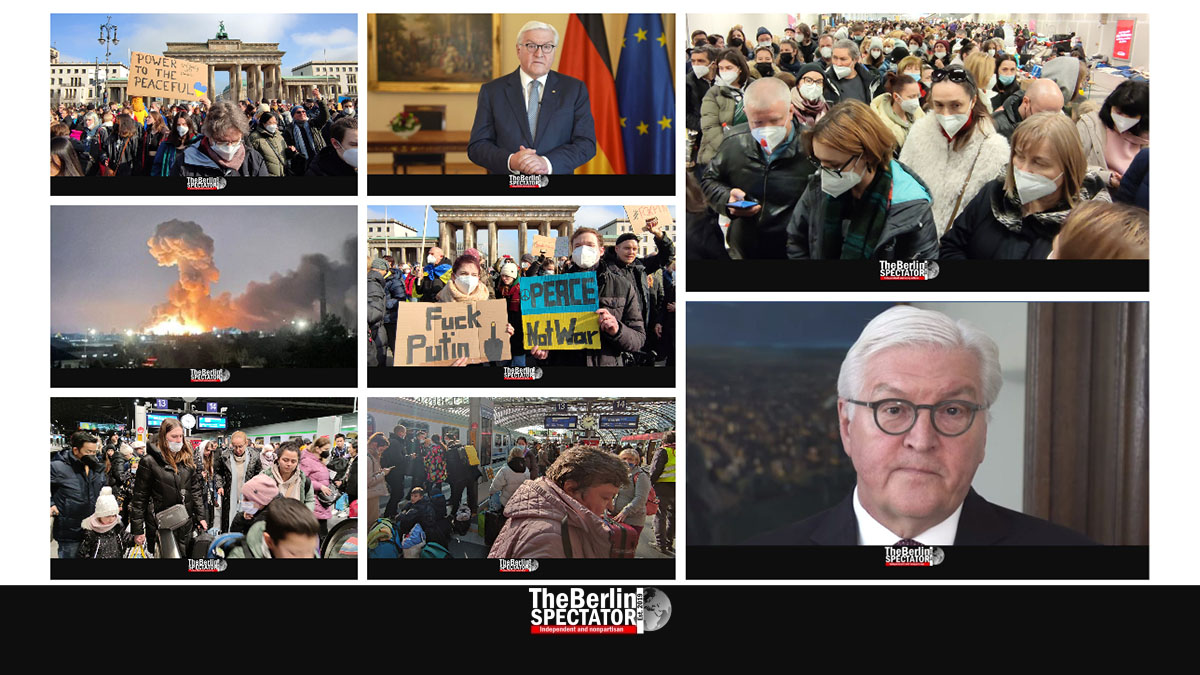 Frank-Walter Steinmeier wanted to visit Kiev to show solidarity. Ukraine reportedly did not want him to come. Then, Volodymyr Zelenskyy stated there had never been a request. Now, Chancellor Olaf Scholz commented on the differences.

Berlin, April 14th, 2022 (The Berlin Spectator) — With his colleagues from Estonia, Latvia, Lithuania and Poland, Germany’s Federal President Frank-Walter Steinmeier wanted to visit Kiev. He would have taken the trip yesterday, had the Ukrainians agreed. According to the German ARD radio and television network, President Zelenskyy’s office told the German Embassy in Ukraine Steinmeier was not wanted there.

Later, on Wednesday, Volodymyr Zelenskyy himself said there had never been a request by Steinmeier’s office. This leads to several questions: Does the Ukrainian government even know what kind of letters its officials are sending out to embassies? Is Kiev now trying to backtrack on the disinvitation? What is going on? Well, the story is a little complicated.

Frank-Walter Steinmeier, a Social Democrat’ (SPD) whose party membership is suspended while he is President, headed the chancellery under Chancellor Gerhard Schröder. Later, he was Foreign Minister in Chancellor Angela Merkel grand coalition. Obviously, he was one of those who shaped Germany’s Russia policy. His approach was to cooperate with Russia, even after it invaded Crimea eight years ago. Like the Chancellors he worked under, he wanted the North Stream 2 natural gas pipeline to be put into service. It would have benefitted Russia.

Since, Steinmeier has admitted Berlin’s Russia policy had been a mistake from today’s perspective. Also, he has been very critical of Russia since it attacked its smaller neighbor Ukraine in February. “Let us refuse to engage with Putin’s pseudo-historic nationalistic delirium“, he recently said. “Stop this madness!“, he told Russia’s President Vladimir Putin. Still, Steinmeier is being shunned by Ukrainian officials.

The other day, Ukraine’s Ambassador to Germany, Andrij Melnyk, refused to attend a solidarity concert for his own country which he was invited to by Steinmeier. Melnyk said it was “an insult” that the soloists were Russians and not Ukrainians, even though the music of Ukrainian composers was played by both Ukrainian and Russian instrumentalists. Now, the scandal about the visit in Kiev broke.

In Berlin, there are very different reactions. For the conservative opposition, Friedrich Merz, the chairman of the Christian-Democratic Union (CDU), just told the ‘Rheinische Post’ daily, Eastern European countries obviously had “profound reservations in regard to the SPD’s Russia policy”. Apparently, Merz forgot that his own party’s former Chancellor Angela Merkel followed the same policy, and that he himself recently told the Bundestag that the Russian war against Ukraine should not be used for partisan politics.

Members of Chancellor Olaf Scholz’ government criticized Kiev instead. Scholz himself stated the disinvitation was “somewhat irritating”. He said the Federal President would have liked to go to Ukraine. “It would have been good if he had been welcomed.” Foreign Minister Annalena Baerbock said she had talked to Steinmeier about the trip and added this visited would have been “useful”.

“The President is Germany. That is why the disinvitation by President Zelenskyy is a disinvitation of Germany”, Vice Chancellor and Commerce Minister Robert Habeck told the Funke Mediengruppe, a publisher of several dailies. He said Ukraine had made a “diplomatic mistake”. Habeck stated Germany needed to make sure the issue was resolved instead of escalating it. “That is what telephones were invented for.”

Germany is one of the biggest financial supporters of Ukraine. Since the latest Russian attack, the Berlin government has dumped its old Russia policy along with the North Stream 2 project and even agreed to send weapons to Ukraine. Minister Annalena Bearbock, a Green politicians who usually opposes weapons exports, now called for the delivery of “heavy weapons” for Ukraine’s defense. On top of it all, Germany is accommodating 340,000 Ukrainian war refugees and helping them in all ways possible.