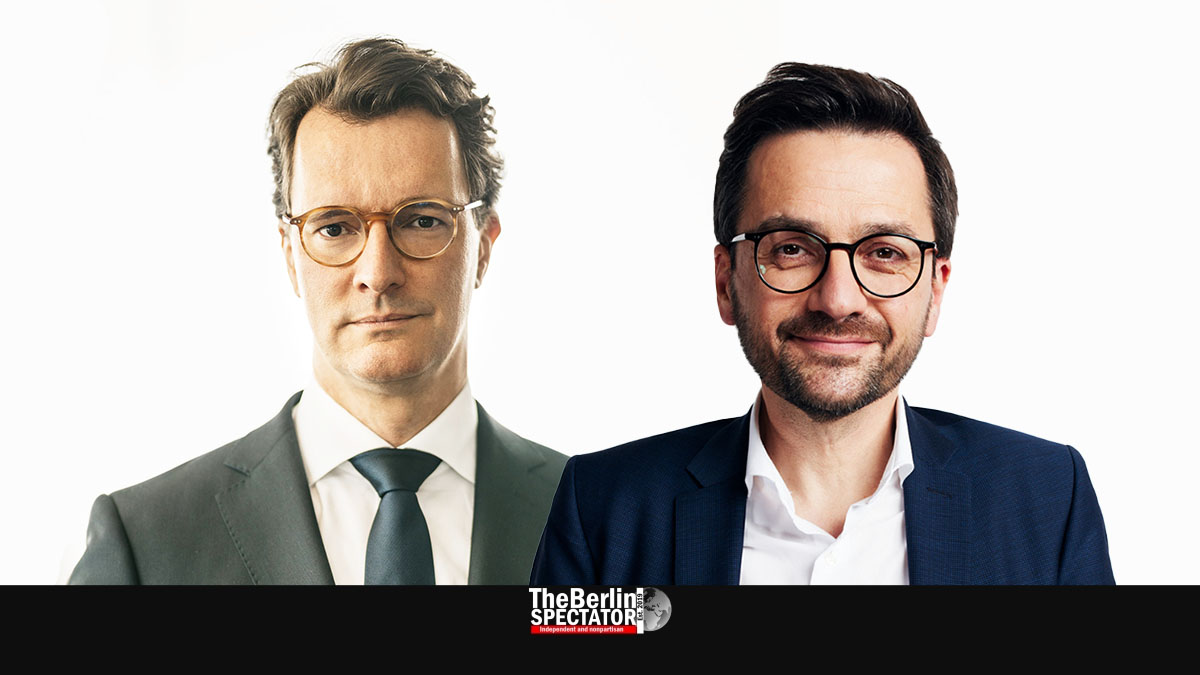 State elections in Germany’s largest federal state North Rhine-Westphalia are taking place today. First Minister Hendrik Wüst of the conservative CDU intends to defend his post. The center-left SPD put Thomas Kutschaty into the race. According to polls, he is slightly behind.

Burgas, Bulgaria, May 15th, 2022 (The Berlin Spectator) — In North Rhine-Westphalia (NRW), the big German state that includes Cologne, Duesseldorf, Bonn, Essen, Bochum, Dortmund and many other cities, this is a big day. Some 13 million residents are eligible to vote in the state elections there. About 786,000 of them may vote for the first time since they reached the right age. The center-right CDU has been governing the state since 2017, with the FDP as its junior partner. Will they be able to continue?

From 1967 to 2005, and again from 2010 to 2017, NRW was a red state, meaning it was ruled by the center-left Social Democrats most of the time since WWII. The SPD even ran the state government on its own from the late 1970s to the mid-1990s. Will they take over the State Chancellery in Düsseldorf again? Nobody knows because this will be a tight race, judging from the latest polls.

The CDU’s Hendrik Wüst has been First Minister for six and a half months only. He has never been his party’s main candidate in elections before. In late October of last year, he succeeded Armin Laschet who became the conservative’s candidate for Chancellor but suffered a bad defeat in the elections for the Berlin Bundestag in September.

When the polling stations close tonight, and the first projections are available, some questions might be answered: Is there still a Scholz effect? His SPD won absolutely all major elections for almost one year, until last Sunday, when the CDU’s Governor Daniel Günter scored a big win in the state elections in Schleswig-Holstein. Could there be a Schleswig-Holstein effect?

Maybe not, because NRW is a different case. Hendrik Wüst was his state’s Transport Minister before he took over as head of government. He has not really had enough time to really show what kind of First Minister he is. His competitor Thomas Kutschaty used to be Justice Minister in Düsseldorf under the last Social Democratic Governor Hannelore Kraft. Since 2018, he is the SPD’s floor leader at the state parliament. It is safe to say that neither Wüst nor Kutschaty are overly famous. But, of course, their faces are looking at the voters from thousands of election campaign posters the entire state was plastered with.

According to the latest polls conducted by the institutes YouGov, Forschungsgruppe Wahlen and INSA, the CDU can expect 31 to 32 percent, while the SPD might get 28 to 29 percent. But there are other big players too, including the Greens who might end up with 15 to 17 percent, meaning they might almost triple the result they got in 2017, while the center-right FDP could get 10 percent, a bit less than 5 years ago. The race is open.

Anything could happen, including a new edition of Wüsts CDU-FDP coalition, or a Red-Green one (the SPD with the Greens), or maybe even an NRW edition of the ‘traffic light coalition’ Chancellor Olaf Scholz is running on the national level. It involves the SPD, the Greens and the FDP.

The Berlin Spectator needs your support.
There are two ways to contribute, as you can see on our Donations Page.
Donations received in the past days:
May 14th: 0 Euro
May 13th: J.L. 40 Euro
May 12th: 0 Euro
May 11th: 0 Euro
May 10th: M.C., 5 Euro
Thank you so much!
We also thank our 16 regular supporters who donate about 8 Euro per day, in total.
In order to become a stable project, this publication needs at least 40 Euro per day. Would you consider becoming a supporter on Paypal (one-time or monthly donations) or a patron on Patreon (monthly donations)? Thank you very much.