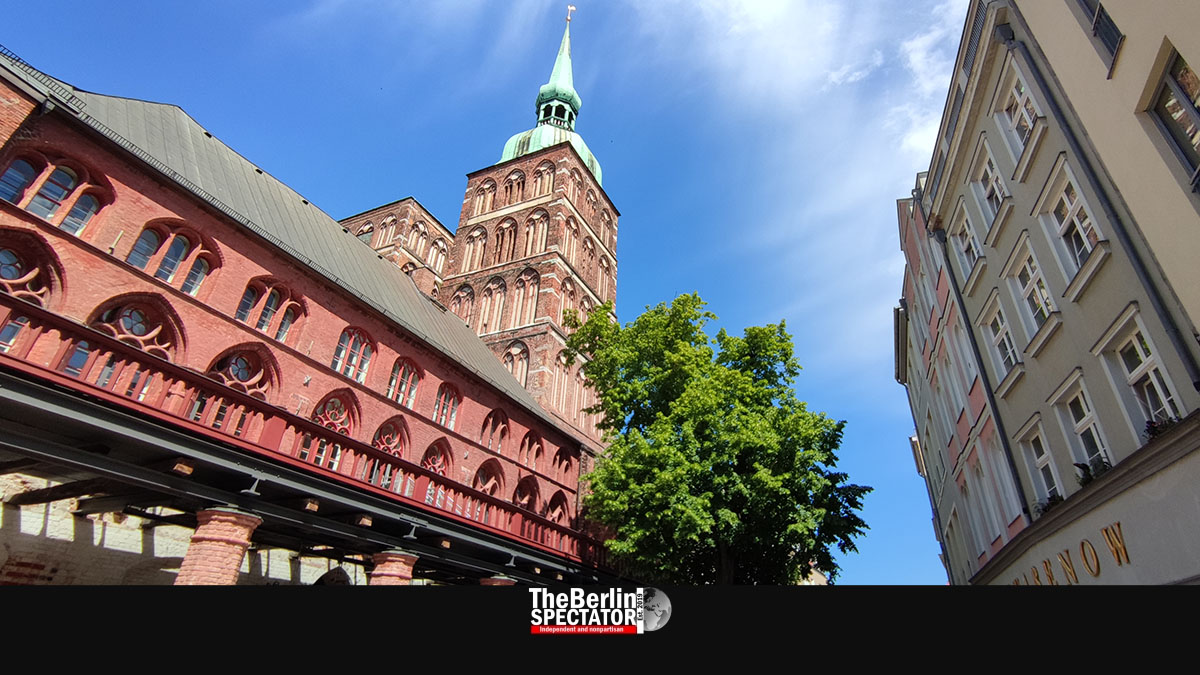 Stralsund in Germany’s federal state of Mecklenburg-Hither Pomerania may be a small city with less than 60,000 inhabitants. But it offers a whole lot. Some 200,000 tourists go there per year, and they do know why.

Berlin, June 7th, 2022 (The Berlin Spectator) — Deutsche Bahn’s bullet train ICE offers the fastest connections from Berlin to Stralsund. They come in from Dresden and Munich before they head to the Baltic Sea. From Berlin’s Central Station, it takes three hours to get there. On regional trains, the trip takes 48 minutes longer, but the 9 Euro Ticket is valid on those in June, July and August of 2022.

Stralsund is the ideal spot for a visit on the way to Germany’s Baltic Sea resorts, as it is quite a sight. The style many of the city’s most famous buildings are known for is Red Brick Gothic, which can be found in other hansa towns as well, including Lübeck, Hamburg and Bremen. Beauty can and will be found all over this place.

Wherever we are in Stralsund, one building will always stick out, literally, namely the giant St. Nicholas Church with its distinctive twin towers. The United Nations Educational, Scientific and Cultural Organization (UNESCO) declared it a World Heritage Site along with most of Stralsund’s picturesque old town. Its southern tower, the one with the peaked roof, is 102.6 meters (3,366 feet) high. In order to be able to take a picture of this giant church, the photographer will have to go far away, even with a fisheye lens, and still won’t manage to get the entire temple onto a photo.

St. Nicholas Church was first mentioned in an official document in the year 1276, 42 years after Stralsund got its town privilege. It is safe to say that both the church and the city are old. The same applies to St. Mary’s Church, the tower of which is even a little higher. Apparently, it was the highest building in the world from 1549 to 1647, when it was damaged by lightning. By the way: The city has a third prominent church. We almost forgot about St. Jacob, which is being used as a cultural venue today.

Stralsund offers many more impressive buildings, including its City Hall located at the Old Market, an interesting location itself, right next to St. Nicholas Church. City Hall was built in the early 14th century and is the city’s main landmark. In 1730, experts came to the conclusion that the building badly needed a major refurbishment. This was when its unique façade was built. It makes City Hall look larger than it actually is and matches the style those big churches and many other buildings were erected in. One of the interesting aspects about Stralsund’s City Hall is its open passage which includes a gallery.

Considering Stralsund’s shrinking population is only 59,000 right now, it has a rather large pedestrian zone with countless shops. Covering it in its entirety takes quite a while. On a Saturday afternoon in early June of 2022, many of the cafés and restaurants were full of tourists. So were the many narrow alleys all over the old town. When it was part of the communist GDR, decay is what Stralsund was known for. Since Germany’s reunification, a lot has happened. Absolutely everything was renovated.

All visitors and locals know that this city is all about water. Stralsund became a rather rich city of merchants because of its port in the first place. Today, it has a few marinas as well. Because the old town is surrounded by the Baltic Sea and several large ponds, it is an actual island. And it is connected to Rügen, Germany’s largest island, by Rügendammbrücke, a bridge for two major roads and train tracks. Freighters, river cruise ships and other vessels can be seen here, including the Gorch Fock, a famous sailing ship the German navy uses for training purposes.

Is there even more water? You bet. Stralsund’s Meeresmuseum offers stunning insights into the seas. It includes several aquariums that feature underwater worlds and life from the Baltic Sea, the North Sea and the North Atlantic. The largest aquarium contains 2.6 million liters (686,847 gallons) of water. In 2010, the Ocean Museum became European Museum of the Year. Hundreds of thousands of visitors come here every year for good reasons.

Tourism is the most important economic sector up there in Stralsund. Obviously, there are countless restaurants, hotels, hostels, bed & breakfast places, several museums, a public swimming pool and even a zoo. One of the biggest employers is MV Werften, a big shipyard that is represented here. There also are shipping companies and several big hospitals.

Our reporter spent only two hours in Stralsund. As he was trying to visit all important spots, he realized he should have stayed for an entire day. But he was on A Crazy Day Trip from Berlin to the Baltic Sea on the 9 Euro Ticket.

The Berlin Spectator needs your support. Do we enjoy asking our readers for donations? No. We wish we did not have to, but we do. The truth is that this publication is on shaky ground.
You can support us via Paypal (one-time or monthly donations) or become a patron on Patreon (monthly donations). If you want to, you can read our Donations Page first.
We thank our 15 regular supporters very much. Without you, we would have given up a while ago.
But, in order to make The Berlin Spectator a stable project, the support would have to be quintupled to a 4-digit figure. Thank you.