Berlin: A Capital Drowning in Garbage 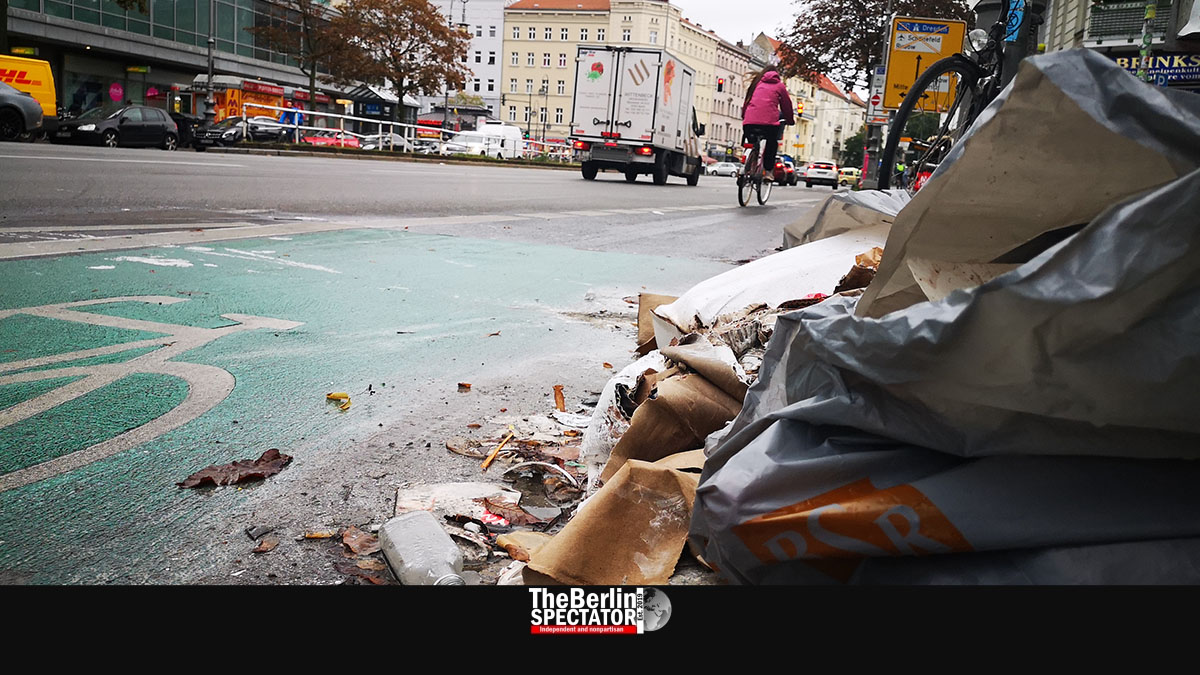 Berlin spends 5 million Euro per year for the removal of bulk garbage and construction waste that is being left on its streets illegally. More bad news? The second city cleaners pick up trash at one location, another rubbish heap will appear somewhere else. Berlin is losing the fight against garbage.

Berlin, October 13th, 2022 (The Berlin Spectator) — Certain parts of Berlin are not clean. There is a word for this state: dirty. Ignorants among this city’s residents are responsible. If someone piled up all the illegally dumped waste on the streets of Berlin, the junk pile this would create would probably reach Jupiter. That is how much trash there is all over the place.

In the city of cities, there are contemporaries who just drop their cigarette butts right on the street. Many dog owners refrain from removing all the sh*t their puppies leave behind, maybe because they think it would look good on someone else’s shoes. During the time it took to write this paragraph, countless Berliners or tourists probably threw the packaging of their Milky Way chocolate bars or Quarter Pounders on the streets of Neukölln, Kreuzberg or Friedrichshain. These people create the least of the problems Berlin has, because it is relatively easy to clean up this kind of rubbish.

This is not about an empty ‘Bihun Suppe’ can or a tiny ‘Jägermeister’ bottle someone drops at Hermannplatz square, or the remainder of firecrackers that have to be cleaned up after New Year’s Eve, but rather about big piles of bulk garbage. Recently, an old sofa was left on Lucy Lameck Strasse. It looked pretty bad right next to a huge white stain left behind by someone who purchased a bucket of paint at the Bauhaus home improvement store around the corner and dropped it on the way home.

Even in posh areas of Berlin, trash is being placed on the street illegally. This includes an old fridge on Holtzendorffstrasse, at the intersection with Witzlebenstrasse in Charlottenburg. It was put there weeks ago, and it still has not been picked up. A neighbor left a note on the fridge, with three letters and a question mark: “WTF?” This is the very same question the people who work for Berlin’s city cleaning company BSR are asking themselves.

The answer to an official inquiry to the Senate, handed in by Tommy Tabor, a member of the extremist right-wing party AfD at the Berlin House of Representatives, paints a shocking picture of the situation. Apparently, the removal of illegally dropped trash cost Berlin almost 5.9 million Euro (5.72 million U.S. Dollar or 5.16 Pounds Sterling) in 2021 alone. Every year, those expenses seem to increase.

Berlin’s Friedrichshain-Kreuzberg district does not have statistics about waste left on its streets, but the district authority provided a list of all the bulk garbage it had removed from parks and playgrounds. In 2021 alone, there were 1,148 cubic meters (12,357 cubic feet) of it. Lichtenberg has a big problem with old cars that were left to rot on its streets. The Mitte district was forced to have hundreds of metric tons of construction rubble cleared off the street last year.

In the past two years, Steglitz-Zehlendorf, another Berlin district, removed 1.7 tons of asbestos, 25.3 tons of construction waste, 19 cubic meters of styrofoam and more than 4 tons of “dangerous building material”. Neukölln spent 293,000 Euro (284,277 Dollars or 256.487 Pounds) in 2021 for the removal of all kinds of bulk garbage. These kinds of issues are registered all over Berlin, but some boroughs are affected more than others.

Is there a light at the end of the tunnel? No. Is there a solution? No. Will the issue resolve itself? No. Garbage of all kinds will be left on the streets of Berlin in future as well, including old cars. Their advantage: Once the districts remove them, they can generate some income by selling them to salvage yards.

Berlin: Will the Mask Return to Supermarkets and Public Buildings?