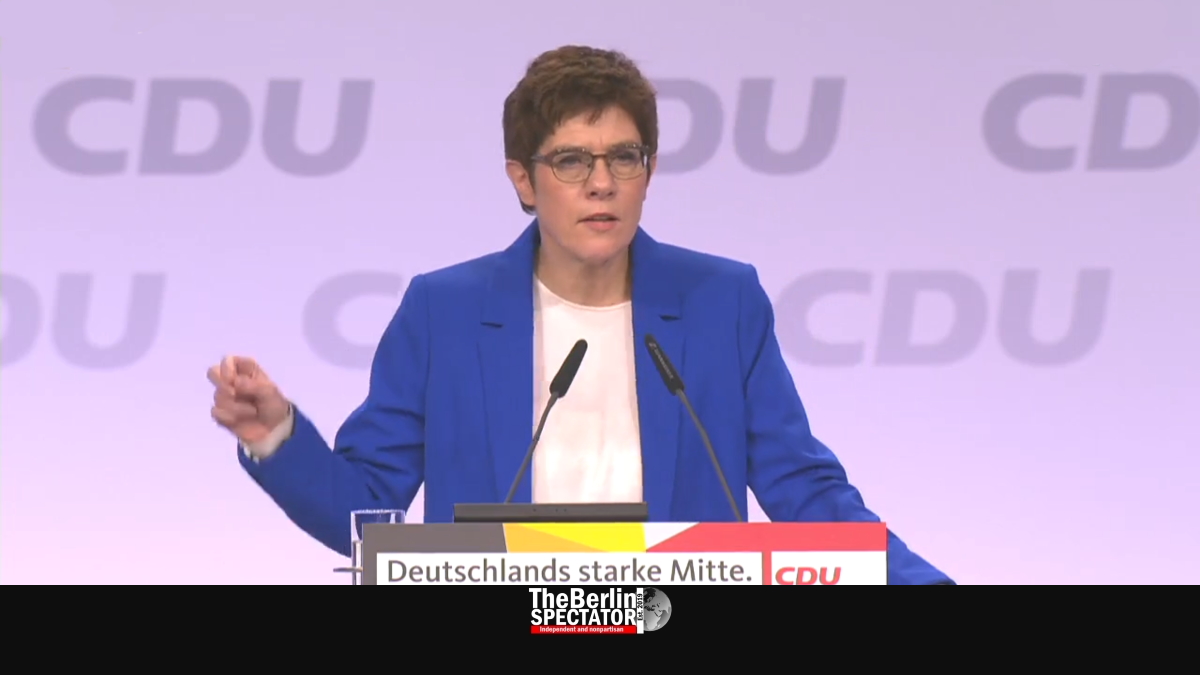 In the eastern German city of Leipzig, a coup within Chancellor Angela Merkel’s conservative party CDU was called off, at least for now. Chairlady Annegret Kramp-Karrenbauer managed to fight off her challengers.

Annegret Kramp-Karrenbauer, the CDU’s chairlady who is Germany’s Minister of Defense at the same time, put up a good show at her party’s big convention in Leipzig. Her performance in front of the delegates basically forced her competitor Friedrich Merz to back off, for the moment.

With her 90-minute speech, AKK got seven and a half minutes of standing ovations, both from those who were really impressed and those who knew they had to be. She started by talking about the peaceful protests right there in Leipzig, which had lead to the fall of the Berlin Wall thirty years ago.

As a former West German, AKK defended the former East Germans: “We West Germans cannot imagine what the changes meant to East Germans”, she said, and demanded “recognition of the Easterners’ life-time achievement.” At the same time she conceded the recent elections in three eastern federal states, namely Saxony, Brandenburg and Thuringia, had been painful.

Kramp-Karrenbauer celebrated Chancellor Merkel: “We had 14 good years we can be proud of.” Of course Germany had not succeeded in everything, but the country had had one of the longest phases of prosperity, thanks to the CDU. AKK criticized those “who complain everything had been bad”. This kind of approach was “not exactly a good election campaign strategy.”

AKK also laid out aspects she wants to change in Germany. For instance she conceded the country was “very complicated and slow” and criticized the bureaucracy which slowed things down. “Let’s get rid of bureaucracy where we do not need it!”, she said and got a lot of applause.

Germany needed a Digital Ministry in order to be on the right track into the future, AKK told her party. And the auto industry needed support. AKK said she was glad about Tesla’s plans to build a factory in Germany, but she was a lot happier about successes of Germany’s auto industry.

Annegret Kramp-Karrenbauer also mentioned those who had challenged her leadership. “In the CDU, we have always had discussions of this kind. We endure them.” At the same time she told her critics that if they did not agree with the path she had laid out, “let us discuss it now. Let’s end this today. Here, now and today.”

According to AKK, the CDU should not be “the repair shop of Germany, but rather its workshop for the future”. Prosperity for all in a digitized world was what she wanted. The CDU had the right program, the creative drive it needed and its claim to leadership.

After this speech and those seven minutes of standing ovations there was not much AKK’s competitor Friedrich Merz could do, except for applauding and smiling pointedly. “We are loyal”, he said in his speech for which he got 90 seconds of applause. “Not this convention will finally decide.” The “vital answers” would be given “in a year from now”. Merz told his supporters that “if you want me to, I will be part of this.”

It is no secret that Friedrich Merz, a former CDU floor leader at the Berlin Bundestag, wants to be Chancellor. He is a successful business man, a millionaire and he is being pushed by certain German media. The power struggle was postponed, but not called off.

Today, the CDU convention in Leipzig will discuss several factual issues. Some of those have the potential to lead to big conflicts, since they include sensitive subjects: