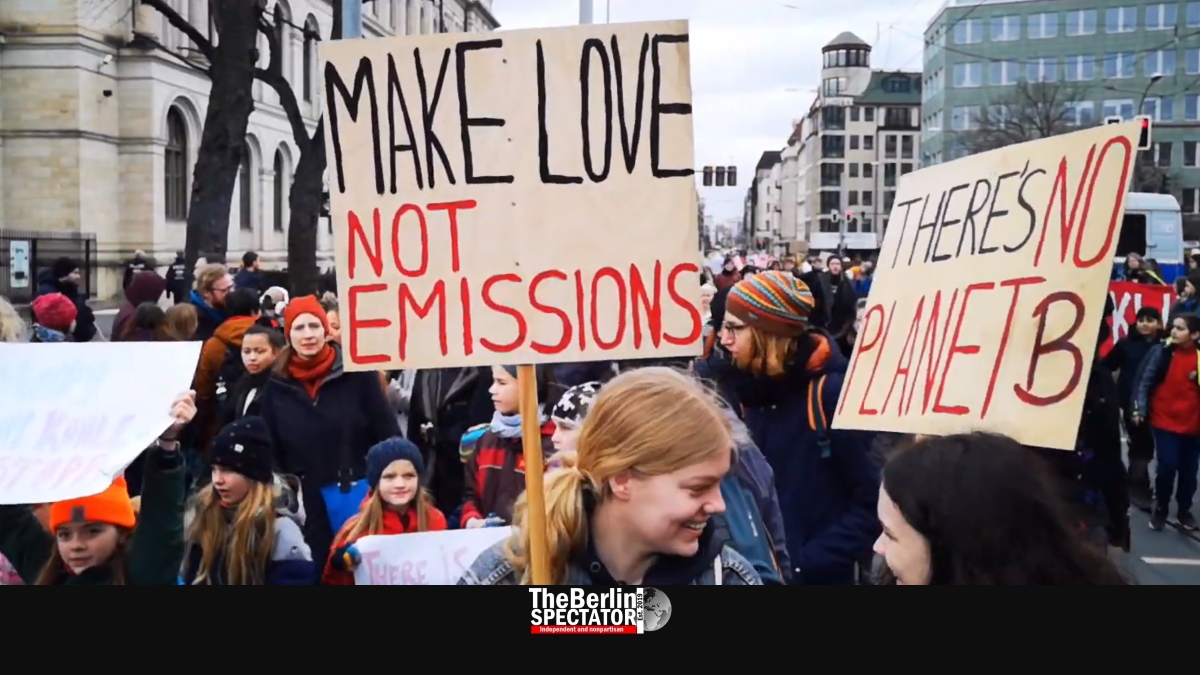 Tens of thousands of German schoolchildren and their supporters are getting ready for Fridays for Future’s next ‘Action Day’ on Friday. The organizers are expecting 50,000 participants in Berlin alone.

In as many as 513 cities and towns all over Germany, and in many other countries, Fridays for Future (F4F) will be protesting on November 29th. While Christmas shopping will be a popular activity on what retail businesses call ‘Black Friday’, students, parents, teachers, scientists and other groups intend to demonstrate against climate change in the streets of Berlin.

The movement founded by the Swedish teenager Greta Thunberg, who is crossing the Atlantic Ocean on a catamaran right now, is demanding more action for climate protection by Berlin. Chancellor Angela Merkel’s government recently pushed its so-called ‘Climate Package’ through the Berlin Bundestag. To F4F, the measures it includes are not going far enough.

“There is no second planet!”, the German division of F4F said on its social media channels. “Therefore it would be better if you joined our fourth global climate strike.” It was important to stand up against climate change. “Enough with those empty promises in politics. We need to act now”, the movement stated.

In Berlin, the rally will commence at noon at Brandenburg Gate. After listening to some speeches, the participants will walk through the German capital’s city center. The route includes Ebertstrasse, Behrenstrasse, the Reichstagsufer, Friedrichstrasse, Luisenstraße, Marshall Bridge, Dorotheenstrasse and Yitzhak Rabin Strasse. After walking all of these streets, the protesters will return to Brandenburg Gate.

Berliners and visitors should expect severe traffic obstructions in Berlin’ Tiergarten and Mitte districts. Police will block ‘Strasse des 17. Juni’ in the late morning and parts of the city center starting at noon. Using the ‘U-Bahn’ is recommended to Berliners and visitors who intend to come to the areas affected by the big ‘Action Day’.

The far more radical organization Extinction Rebellion in Germany announced, it would be part of tomorrow’s ‘Climate Strike’, without mentioning Fridays for Future. In several German cities, the movement would join “in demonstration blocks”.

In its latest statement, Extinction Rebellion Germany distanced itself from its co-founder Roger Hallam, who had appeared to be downplaying the Holocaust as “just another f***ery in human history” in an interview with the German weekly ‘Die Zeit’. “Any downplaying of the Holocaust is contradictory to the principles and values of Extinction Rebellion”, the statement said.

The movement was in a “phase of ratiocination”, its statement continued, and it intended to come out of it strengthened. In Berlin and elsewhere, Extinction Rebellion is organizing so-called “onboardings” these days, during which it wants more people to become “rebels”.

While a majority of Berliners supports Fridays for Future, most residents reject Extinction Rebellion’s approach. In October, the radical movement blocked several bridges, intersections and streets in the German capital for several days. Participants chained themselves to guardrails on streets and kept police busy for a week.