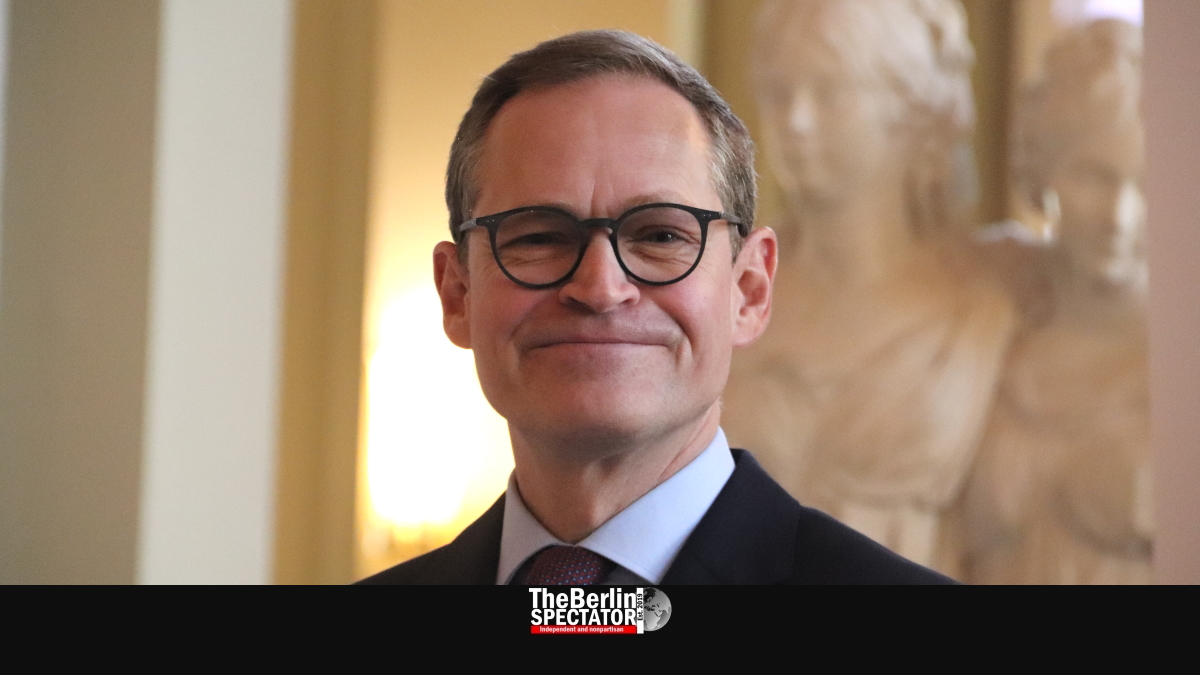 Governing Mayor Michael Müller introduced part of the program for the 100th anniversary of the Greater Berlin Act today. The law had “made Berlin what it is today”, he said. Müller talked about his plans for this year too.

A hundred years ago, the Greater Berlin Act took effect. On October 1st, 1920, Berlin swallowed neighboring towns and became the third-largest city in the world regarding the number of inhabitants, right behind London and New York. Today those two cities are far more than twice as large as Berlin. Back then, Greater Berlin even became the second-largest city in terms of its area.

In 1920, the number of Berlin’s inhabitants was what it is today, approximately 3.8 million. The Berlin of 2020 might be the second-largest city in the European Union, and it will be the largest one after Brexit, but compared to Mexico City, Rio de Janeiro, Beijing, Tokyo and many other ‘competitors’, it is almost tiny.

Regardless of these comparisons, the Greater Berlin Act paved the way for Berlin to become a metropolis, with all the advantages this had and still does. Now that the 100th anniversary of the Act is coming up, Berlin is already acknowledging it with the first event. Governing Mayor Michael Müller tendered a design competition for students of the Berlin University of the Arts, for the anniversary, a while ago.

Now their work can be looked at in an exhibition entitled ‘Berlin 100 – Metropolis Overnight’ at Red City Hall, in the staircase (main entrance), Mondays to Fridays from 8:00 a.m. to 6:00 p.m.. Admission is free. Müller checked out the posters the students made today. Numerous additional events are planned for later this year.

“The Greater Berlin Act is the crucial historic step to the metropolis of Berlin”, the Governing Mayor said on Monday. “The territory reform connected to the law has made our city what it is today.” Müller stated his predecessor Adolf Wermuth had forced it through and implemented the reform right after Word War I. Wermuth will be honored as ‘father of Greater Berlin’ during the anniversary organized by the Initiative ‘100 Years of Greater Berlin’.

The main anniversary event will take place in late April in Berlin’s House of Representatives. Generally, the festivities will also connect the past to the present, according to Governing Mayor Müller. Exhibitions in Berlin’s City Museum, at the August Bebel Institute and other institutions are planned. More contributions from the University of the Arts and the German Film Archive and other institutions are expected this year as well.

Michael Müller also compared the political situation in 1920 to what is going on in Germany today. “The young democracy of 1920 (Weimar Republic) did not make it”, he said. “It did not manage to hold its ground against its enemies. We know what this can lead to”, the Governing Mayor stated. “We need to show that we have learned from 1920.”

This year, Müller and his Senate intend to work on the new Cardiac Center that will be built in Berlin, on the transformation of Tegel Airport after its closure in November, on the First Minister Conferences that Berlin will be heading, on future technologies and the extension of the city’s public transport. In this regard, Müller said existing U-Bahn lines needed to be extended because building new ones was too expensive.

On top of it all, Müller wants to make headway at “organizing the traffic of the future”. This week, he will hand in Berlin’s application as host of the IAA Motor Show with the German Association of the Automotive Industry, against the will of many members of the Berlin Greens, one of his coalition partners, and do more for economic growth.