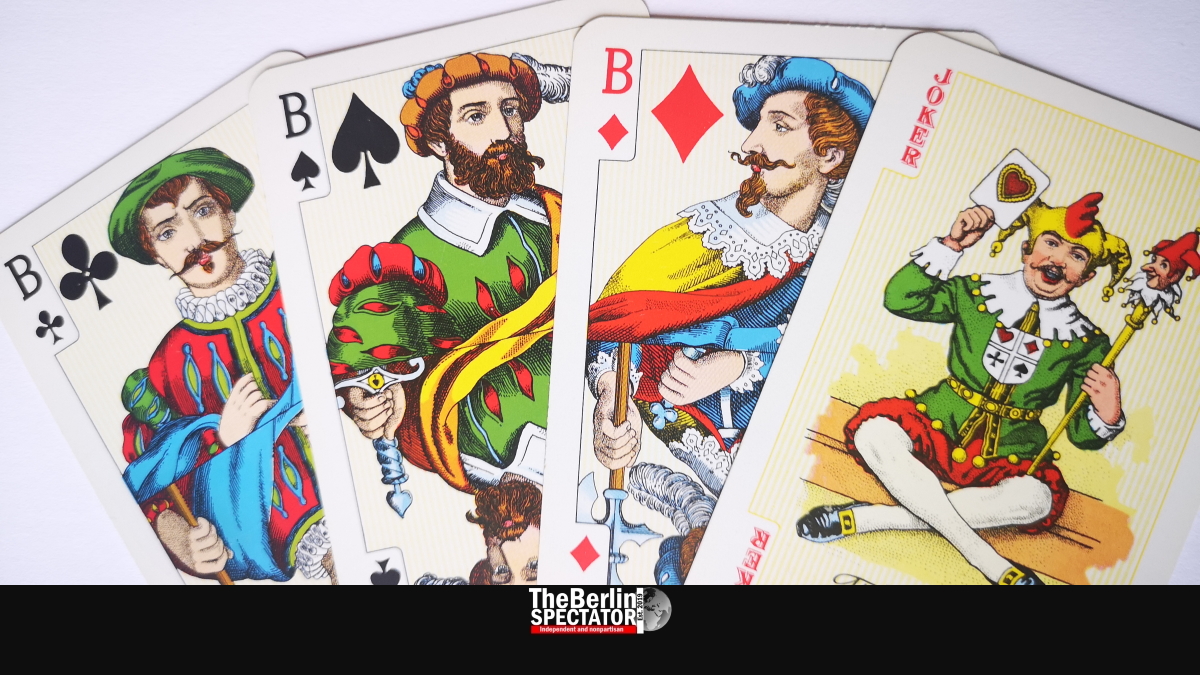 In Angela Merkel’s conservative CDU, a new leader and her successor as Chancellor are being sought. There are four hopefuls. Who is the right guy for the party leadership and the Chancellery?

The Jack of Clubs wants to lead, but does not directly say so. His first competitor, the Jack of Spades, has not said much about this either. While the Jack of Hearts entered the race late in the game, the Jack of Diamonds kept on repeating he was “ready to take responsibility” until he dropped out. In a far-away land called Bavaria, there is still the Joker who might turn all four Jacks into lasagna.

The Jack of Clubs has tried before, and failed. Friedrich Merz is an old Merkel-foe and former floor leader of the CDU’s caucus at the Berlin Bundestag. The clarinet-playing pilot for small planes is probably the only multi-millionaire among the candidates, but still considers himself part of the “upper middle class”.

Merz, who supposedly played cards during classes when he was in high school, does have a lot of experience. In 1972, at the age of 17, Friedrich Merz became a CDU member. In 1989, he became part of the European Parliament. Five years later, in 1994, he was an MP at the Berlin Bundestag.

It took him four years to become deputy floor leader and another two to reach the top post in the caucus, which means he was opposition leader in parliament, until the leader of his party, Angela Merkel, took that position away from him in 2002. Merz slid back into the deputy job. There has been friction between the two ever since. In 2004, he stepped down, and in 2009 he refrained for running for his Bundestag seat again “because of political differences”.

Just before the Thuringia scandal erupted, in February of 2020, Friedrich Merz announced he would leave the supervisory board at Blackrock after the first quarter of this year, in order to work in politics more. Even though he does not directly say so, it is clear Merz wants to lead the CDU and become Chancellor. After Kramp-Karrenbauer announced she would step down after finding her successor, he was seen smiling all over German television. His moment might indeed have come. The Jack of Clubs seems to have relatively good chances.

Contrary to the other three Jacks’ approach, the Jack of Spades is trying to keep a low profile at this stage. He knows it is too early to throw his head into the ring and would rather be begged by others to do so. Also he knows going for party leader and Chancellor would be a risk. But many in the CDU would bet on Armin Laschet.

He started his political career as a city councilman in Aachen. Then, the sky became the limit. Laschet, a likable contemporary who will turn 59 on Tuesday, hit the Berlin Bundestag in 1994. From 1999, he mainly dealt with foreign and budgetary policy as an MEP in Brussels.

When he returned to Düsseldorf in 2005, he became North Rhine-Westphalia’s Family and Integration Minister. Because of that position as a moderate in the CDU, he was bullied by some party colleagues. In 2010, Armin Laschet became a member of the Düsseldorf ‘Landtag’. Three years later he was the CDU’s floor leader. Since 2017, he has been heading the federal state’s coalition government with the FDP as First Minister.

More than any other serious candidate, Laschet represents Angela Merkel’s more moderate CDU. The fight for power is also a fight for the direction the most powerful party in Germany will take. It remains to be seen when the Jack of Spades will finally enter the ring officially, determined to defeat the other contestants.

Everyone was surprised when the Jack of Hearts jumped into the arena even before anyone else had officially announced his candidacy. One of Norbert Röttgen’s achievements is that he was fired by Angela Merkel when he was Environment Minister. Another is that he lost the 2012 elections in North Rhine-Westphalia as the CDU’s main candidate just before he was fired.

Back then, several CDU members criticized Chancellor Merkel for kicking him out. Others understood. Röttgen had delivered a few scandalous quotes during the election campaign. For instance, he had said the regional election was about Merkel’s European policy. This was something he needed to retract a day later.

Since, Norbert Röttgen has become chairman of the Berlin Bundestag’s foreign policy committee even though he is known for supporting the Palestinian leadership, in spite of its support for terror, its rejection of all peace plans that have ever been put on the table, its exploitation of the Palestinians and its failure to recognize Israel or to agree to negotiations.

Like the Jack of Clubs, Röttgen is a Merkel foe and would probably lead the party towards the right to some extent. At this stage, Röttgen’s chances to succeed seem to be slim, but that might change.

The Jack of Diamonds is the one with the boy scout approach. Whenever there is an opportunity, he says he wants to lead. Last year, his candidacy as party leader was crushed by both Annegret Kramp-Karrenbauer and Friedrich Merz, meaning Jens Spahn came in third. While many, including some of his own party colleagues, do not take his ambitions too seriously, he is the most active Health Minister the country has seen.

Jens Spahn, who is Catholic, openly homosexual and one of the youngest federal ministers ever, will turn 40 later this year. In 1995, at the age of 15, he joined the CDU’s youth organization. Later he became part of the city council in his home town of Ahaus. Since 2002, he managed to hit the Berlin Bundestag as a directly elected MP five times.

In March of 2018, Jens Spahn became Health Minister, and has been hyper-active ever since. He is one of the federal ministers who get things done. Once he was in office, he started working on improvements for patients and the digitization of the health system. Spahn won his fight for mandatory measles vaccinations in November of 2019 but did not manage to get his organ donation concept through the Bundestag.

Spahn has criticized his boss Angela Merkel more than once. He slammed her migration policy. Earlier this week, he said the CDU had to emancipate itself from Merkel. The Jack of Diamonds calls himself a “liberal conservative”, but seems to be less liberal than Merkel, Laschet and the entire moderate part of the party. On February 25th, 2020, he dropped out of the race and became part of Laschet’s team.

According to the plans announced by today’s CDU party leader Annegret Kramp-Karrenbauer, the Joker cannot become candidate for Chancellor. A few days ago, she said the candidate should also be heading the CDU. In the case of Markus Söder that would be a mission impossible, since he heads the CDU’s Bavarian sister party CSU. But many in the CDU still want him to take over the Chancellery once Merkel vacates it.

Early on, Söder was an admirer of the late Franz-Josef Strauss, Bavaria’s controversial First Minister. For eight years, he headed the CSU’s youth organization in Bavaria. Once he was too old for that, he became chief secretary of the party. From that moment onward, he was being noticed outside of Bavaria as well. His rhetorical gift made him stick out.

Markus Söder headed three Bavarian ministries in four different governments until he became First Minister himself, in March of 2018. Last year, in January of 2019, he also became the CSU’s party leader after a power struggle against Horst Seehofer. Söder is both an ultra-conservative and someone who wants to modernize his party, against the will of many other conservatives in the CSU.

The Joker is popular in the CDU too, also because of his personality. The Kennedy/Obama effect even makes Chancellor Angela Merkel smile when Söder holds speeches. Is it time to send the next CSU candidate into the race? The Joker has not officially said he was ready, but some of his statements suggest he is. (Read separate article ‘Markus Söder: The Natural‘)